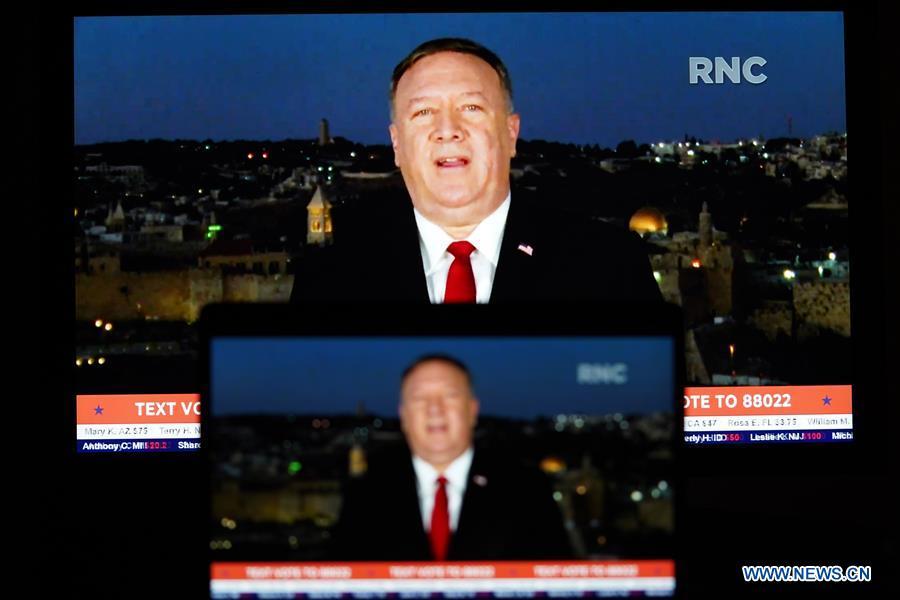 Photo taken on Aug. 25, 2020 shows screens displaying U.S. Secretary of State Mike Pompeo giving a speech to the Republican National Convention (RNC) from Jerusalem. U.S. House Democrat Joaquin Castro on Tuesday announced that he had launched an investigation into Secretary of State Mike Pompeo's speech to the RNC on Tuesday night. (Photo: Xinhua)

WASHINGTON, Aug. 25 (Xinhua) -- U.S. House Democrat Joaquin Castro on Tuesday announced that he had launched an investigation into Secretary of State Mike Pompeo's speech to the Republican National Convention (RNC) on Tuesday night.

In his letter to Deputy Secretary of State Stephen Biegun, Castro said that "it is highly unusual, and likely unprecedented, for a sitting Secretary of State to speak at a partisan convention for either of the political parties. It appears that it may also be illegal."

Castro, chairman of House Foreign Affairs panel's subcommittee on oversight and investigations, noted that Pompeo's speech to the RNC might violate the Hatch Act and State Department policies.

The Hatch Act is a federal law that prohibits employees in the executive branch of the federal government, except the president, vice president and certain designated high-level officials, from engaging in some forms of political activities.

Castro said that Pompeo, who is on official travel in the Middle East, also broke the Foreign Affairs Manual, which prohibits State Department officials from engaging in partisan political activities abroad.

Castro asked Biegun to provide a written response on details of Pompeo's trip to Jerusalem and preparations for his speech.

Pompeo is drawing criticism at home for giving his speech to RNC from Jerusalem. A State Department spokesperson defended that Pompeo "would address the convention in his personal capacity. No State Department resources will be used."