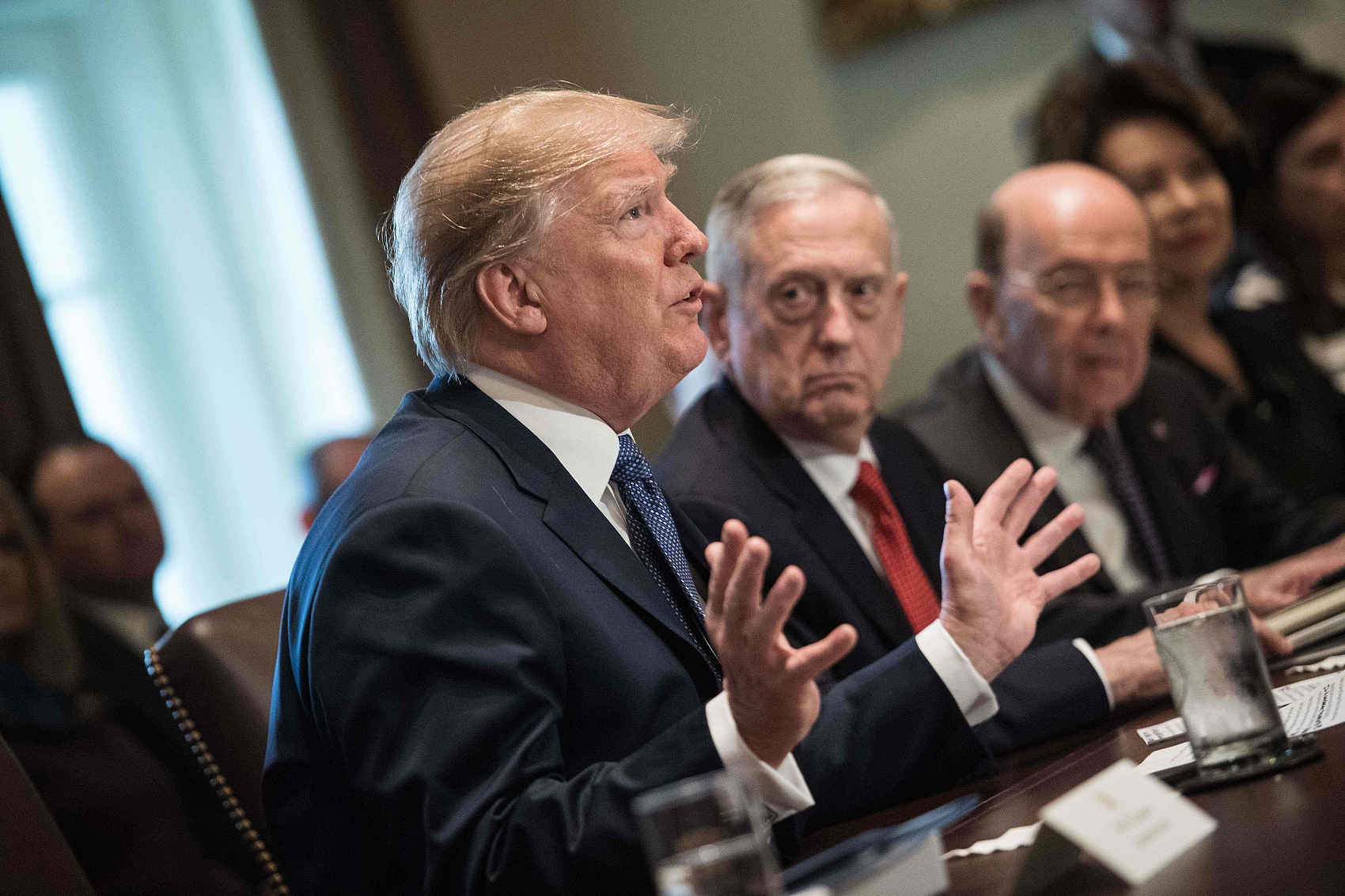 US President Donald Trump speaks during a cabinet meeting at the White House in Washington, DC, on November 1, 2017.  (Photo: VCG)

The legislation is a long-standing goal for Capitol Hill Republicans who see a once-in-a-generation opportunity to clean up an inefficient, loophole-cluttered tax code. But there is lingering opposition from northeastern Republicans fearful of losing a cherished deduction for state and local taxes and anxiety among other rank-and-file lawmakers over emerging details.

Senior GOP lawmakers confirmed the decision to retain existing rules on 401(k) accounts, which came after assurances from President Donald Trump that they would not be changed. Ways and Means Committee Chairman Kevin Brady, R-Texas, had hoped to reduce 401(k) contribution limits, in part to generate new tax revenues in the near term to finance the cuts to income tax rates.

Another lawmaker cautioned that the decision might still change. The lawmakers required anonymity because the tax panel is trying to keep its deliberations secret until the tax measure is released Thursday.

Brady said the panel hoped to meet Trump's goal of a cut in the top corporate tax rate from 35 percent to 20 percent but allowed that the change would not be permanent because of arcane Senate rules.

Republicans and Trump argue sharply cutting tax rates for businesses improves U.S. economic competitiveness, but the possibility of letting the lower corporate rates expire is rankling some longtime advocates who say the uncertainty could limit its boost to the economy.

Top Republicans vowed to release the measure on Thursday after missing a self-imposed Wednesday deadline and dismissed rumors that the unveiling might be further delayed. The ambitious timetable calls for passing the measure in the House by Thanksgiving.

"Failure is not an option," said Rep. Chris Collins, R-N.Y.

The emerging plan would retain the Clinton-era 39.6 percent income tax rate for the wealthiest earners. But for that highest bracket, the tax writers were considering raising the minimum level of income to $1 million for couples or families from the current $470,000 — a change that would reduce tax revenue.

Trump weighed in Wednesday on Twitter: "Wouldn't it be great to Repeal the very unfair and unpopular Individual Mandate in ObamaCare and use those savings for further Tax Cuts for the Middle Class. The House and Senate should consider ASAP as the process of final approval moves along. Push Biggest Tax Cuts EVER."

The idea of repealing the individual mandate has been pushed by Republican Sen. Tom Cotton of Arkansas, but was dismissed by key GOP leaders since it would add political complications to an already difficult task of crafting a tax bill that can pass the House and Senate.

"I think tax reform is complicated enough without adding another layer of complexity," said No. 2 Senate Republican John Cornyn of Texas. Rep. Kristi Noem, R-S.D., a participant in the talks as a member of the tax-writing panel, said there was insufficient support among committee Republicans to include it in the bill.

GOP leaders still struggled to win over lawmakers from New York and New Jersey, many of whom are opposed to repealing a lucrative deduction for state and local taxes that benefits their states more than others.

"I view the elimination of the deduction as a geographic redistribution of wealth picking winners and losers," said Rep. Lee Zeldin, R-N.Y., who represents eastern Long Island. "I don't want my home state to be a loser, and that really shouldn't come as any surprise."

The plan outline released last month by Trump and Republican leaders in Congress called for shrinking the number of tax brackets from seven to three or four, with respective tax rates of 12 percent, 25 percent, 35 percent and to be determined. The tax system would be simplified, and most people would be able to file their returns on a postcard-sized form.

The plan calls for nearly doubling the standard deduction used by most average Americans to $12,000 for individuals and $24,000 for families, and increasing the per-child tax credit. In addition to slashing the corporate tax rate, it also seeks to repeal inheritance taxes on multimillion-dollar estates, a big break for the wealthy.

Meadows said he was worried about eligibility limits that could prevent some businesses from taking advantage of a lower 25 percent tax rate.

"How as a Republican can we pick winners and losers that way? I mean it makes absolutely certifiably no sense," Meadows said.

The president set an aggressive timetable for the legislation and predicted a grand signing ceremony before Christmas at "the biggest tax event in the history of our country."

Democrats have repeatedly complained the plan was too favorable to business and the wealthy and contradicted Trump's rhetoric of bringing relief and economic benefit to the stressed middle class.