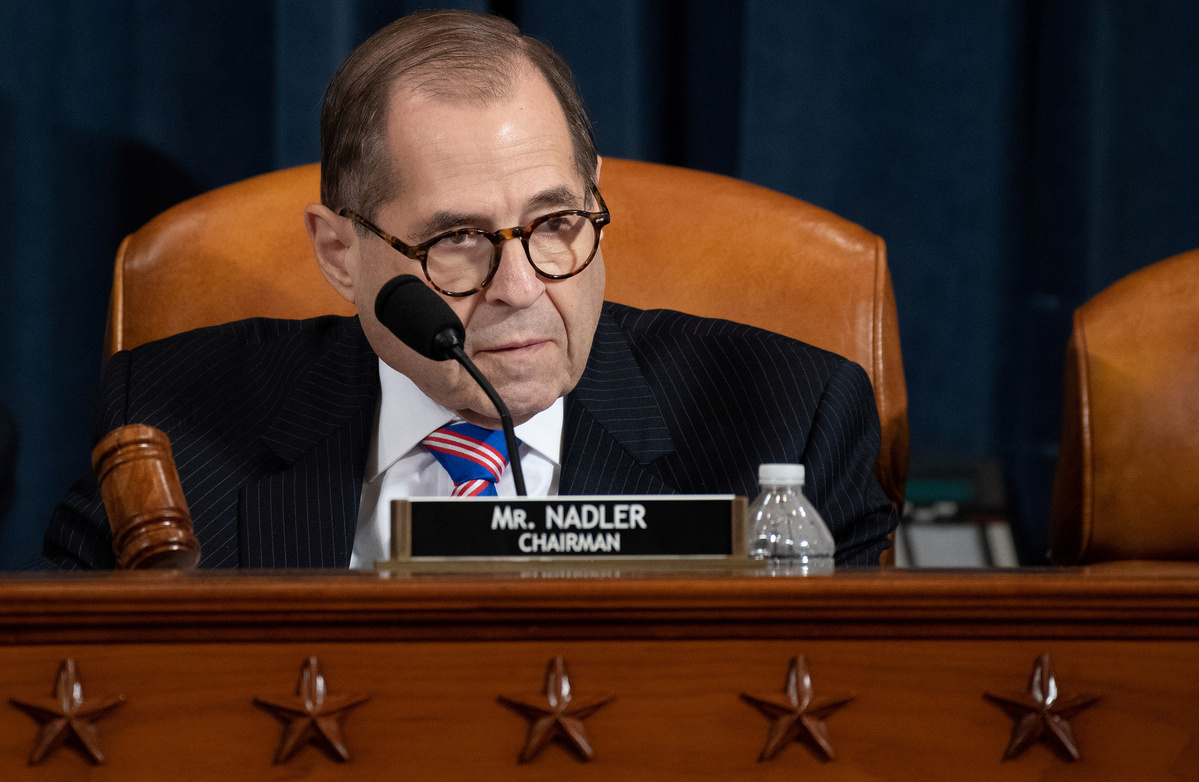 WASHINGTON - The Democrat-led House Judiciary Committee took over a months-long impeachment proceeding into US President Donald Trump by holding its first hearing on Wednesday.

After opening remarks by Chairman Jerry Nadler and Ranking Member Doug Collins, four constitutional law professors, three chosen by Democrats and the other invited by Republicans, provided testimony to the panel and took questions from lawyers and lawmakers of both parties.

"According to the testimony presented to the House, the solicitation sought to gain an advantage that was personal to the president. This constitutes a corrupt abuse of the power of the presidency," Feldman said.

In contrast, Jonathan Turley, professor of public interest law at the George Washington University Law School, cast doubt on the speed and scope of the proceeding, saying he is "concerned about lowering impeachment standards to fit a paucity of evidence and abundance of anger".

"Fast and narrow is not a good recipe for impeachment," Turley said. "They tend not to survive. They tend to collapse in front of the Senate."

House Democrats are looking into whether Trump abused his office by pressuring Ukraine into launching investigations that could benefit him politically. Lawmakers are also examining whether the Republican conditioned a White House meeting or a military aid to Ukraine on those probes.

Wednesday's hearing came a day after the House Intelligence Committee released a report on its findings in the impeachment inquiry, which called evidence of Trump's alleged misconduct and obstruction of Congress "overwhelming."

Trump, who is in London meetings with other leaders on Wednesday, told reporters that he had seen the report, which he called "a joke."

The president, who has consistently denied any wrongdoing or a "quid pro quo," weighed in on the ongoing hearing.

"To do it on a day like this where we're in England ... It just happened to be scheduled on this day. It's really honestly, it's a disgrace," he said.

Nadler, who presided over the hearing, said they "cannot wait for the election to address the present crisis."

"If it is true that President Trump has committed an impeachable offense - or impeachable offenses - then we must move swiftly to do our duty and charge him accordingly," said the New York Democrat, adding his committee will reconvene in a few days and hear from impeachment investigators of other House panels.

Ranking Member Doug Collins lashed out at Democrats during the hearing, accusing them of having tried to impeach Trump since he was elected, while the panel's top Republican claimed the impeachment inquiry is driven by "the clock and the calendar" rather than "the facts".

The Democrat-led impeachment inquiry has found that Trump, "personally and acting through agents within and outside of the US government, solicited the interference of a foreign government, Ukraine, to benefit his reelection," claimed the intelligence panel's report that also accused the president of having "engaged in an unprecedented campaign of obstruction."

"Democrats still don't get it - they are pushing ahead with impeachment based on opinions from liberal law professors from coastal universities," House Minority Leader Kevin McCarthy tweeted on Wednesday. "This is the reason that Donald Trump won in 2016, and it's the reason he will win again in 2020."

House Speaker Nancy Pelosi, who initiated the impeachment inquiry into Trump in late September, tweeted, "the facts are not contested," urging Congress to decide how to carry out its constitutional duty, as Democrats were reportedly on track to potentially vote on impeaching Trump by Christmas and voters remained sharply divided over Trump's impeachment and his removal from office.

White House Counsel Pat Cipollone met with Republican senators on Wednesday to discuss how the impeachment process might unfold over the coming months.

Senate Majority Leader Mitch McConnell told reporters that he would first meet with Minority Leader Chuck Schumer for a deal to establish rules for an impeachment trial if the House impeaches Trump.