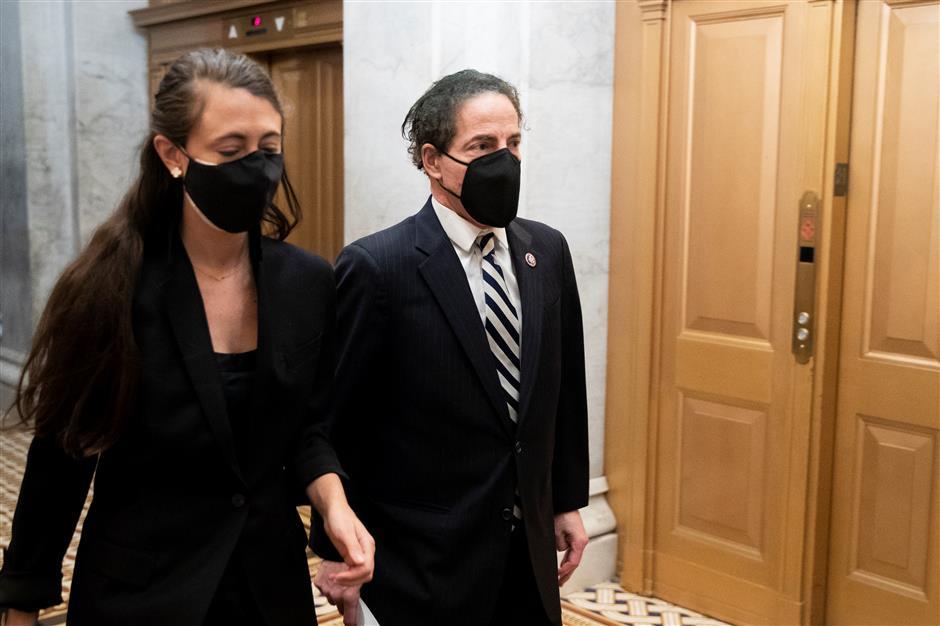 Rep Jamie Raskin (right) walks down a hallway during a break on the third day of Trump's second impeachment trial at the US Capitol on February 11 in Washington, DC.

House prosecutors wrapped up their impeachment case against Donald Trump on Thursday with an impassioned appeal to the Senate to convict the former president of inciting the deadly January 6 attack on the US Capitol and bar him from ever holding office again.

"We humbly, humbly ask you to convict President Trump for the crime (of) which he is overwhelmingly guilty," said Democratic Representative Joe Neguse, one of the nine impeachment managers from the House of Representatives.

"Because if you don't, if we pretend this didn't happen — or worse, if we let it go unanswered — who's to say it won't happen again?"

The House impeachment managers rested their case after two days of arguments that included Trump's own words and hours of graphic video from the assault on the Capitol by Trump supporters who were seeking to halt certification of Democrat Joe Biden's November 3 election victory.

Trump's lawyers will begin their defense on Friday, arguing that the former president cannot be held personally responsible for the storming of Congress.

They have also argued that the trial itself is unconstitutional because Trump is now out of office, although the Senate rejected that argument earlier this week.

Jamie Raskin, the lead House manager, reminded the 100 senators who are sitting as jurors of their oath to render "impartial justice."

"Exercise your common sense about what just took place in our country," Raskin said, noting that Trump stood by doing nothing for two hours as his supporters rampaged through Congress.

"Why did President Trump not tell his supporters to stop the attack on the Capitol as soon as he learned about it?" Raskin asked. "As our constitutional commander in chief, why did he do nothing to send help?"

Earlier, President Joe Biden said the video evidence against his 74-year-old predecessor presented at the Senate trial may change "some minds."

But despite what even some Republicans have said was a strong prosecution case, Trump retains an unshakable grip on the party, making conviction highly unlikely.

It would take a two-thirds majority in the 100-member Senate, meaning 17 Republicans would need to join the chamber's 50 Democrats.

The mayhem on January 6 erupted after Trump held a large rally near the White House, insisting falsely, as he had done since losing to Biden in November, that he was cheated.

Instructed by Trump to march on Congress, where lawmakers were at that moment certifying Biden's election, the crowd smashed through police lines, then went on a rampage.

The chaos left five people dead, including one woman shot after she invaded the Capitol and one policeman killed by the crowd.

Video footage played by impeachment managers showed the mob hunting down opponents of Trump and senior figures, including then Vice President Mike Pence, having to flee to safety.

The defense will stress that Trump did not expressly tell his supporters to commit violence, but Raskin pointed out that the Republican president had been stoking anger and encouraging extremism since Election Day — and even before.

"This pro-Trump insurrection did not spring out of thin air," Raskin said. "This was not the first time Donald Trump had inflamed and incited a mob."

Raskin said it was imperative the Senate convict Trump and bar him from running for the White House again in 2024.

"Is there any political leader in this room who believes that if he's ever allowed by the Senate to get back into the Oval Office Donald Trump would stop inciting violence to get his way?" Raskin asked.

"Would you bet the future of your democracy on that?

Raskin also dismissed claims by Trump's lawyers that the president did not incite the riot but was just exercising his free speech rights under the First Amendment of the Constitution.

Calling this a "smokescreen," Raskin said that "nobody can incite a riot."

"First Amendment doesn't protect it," he said. "Nobody in America would be protected by the First Amendment if they did all the things that Donald Trump did."