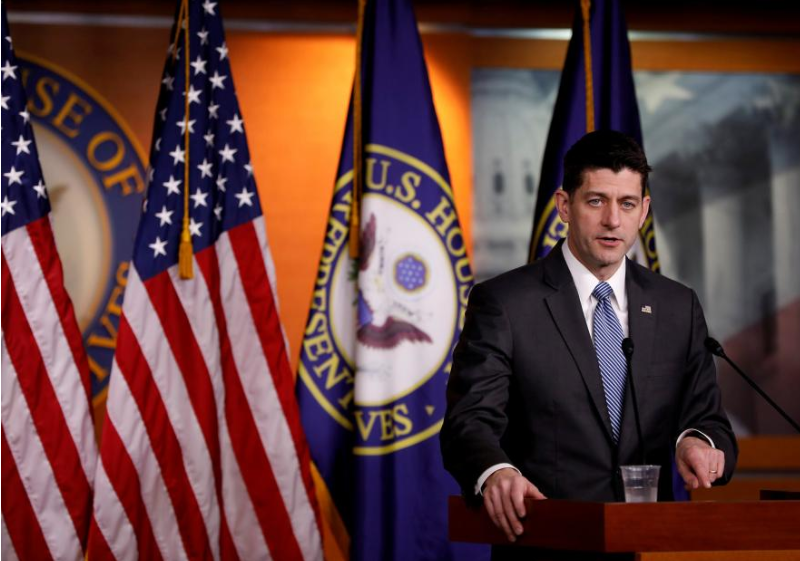 Speaker of the House Paul Ryan speaks with reporters during a news conference on Capitol Hill in Washington, DC, US, April 26, 2018 (Photo: Reuters)

US House of Representatives Speaker Paul Ryan on Wednesday faced revolts from the right and center of his Republican Party as lawmakers fought over legislation that would protect young illegal immigrants from deportation.

At a morning press conference after huddling privately with rank-and-file Republicans, Ryan warned a small group of moderates that it would be a “big mistake” if they continued pushing a procedural maneuver to force votes on four separate immigration bills.

Instead, Ryan said he was working with the White House on a singular measure that would win President Donald Trump’s support. At a press conference, Ryan did not provide details or a timetable for advancing such legislation.

So far, 18 of the House’s 235 Republicans signed a petition aimed at forcing a wide-ranging immigration debate that would allow the bill with the most votes to advance to the Senate.

They aim to join forces with Democrats to pull off the rare procedural trick in defiance of leadership. Some of the 18 are retiring, while some others are moderates seeking re-election in November and represent districts with a significant number of Hispanics.

Meanwhile, Ryan also faced a challenge from the other wing of his party, as hard-right conservative members of the House Freedom Caucus discussed withholding their votes on an unrelated farm bill later this week unless Ryan agrees to bring to the floor a tough bill clamping down on legal and illegal immigration.

That measure, spearheaded by House Judiciary Committee Chairman Bob Goodlatte, also would give temporary protections to the young “Dreamer” immigrants who were brought into the United States illegally when they were children.

Freedom Caucus member Jim Jordan said Republican leadership had been telling members there does not appear to be enough support for passage of Goodlatte’s bill, but Jordan still favors voting on it alone rather than having the House vote on it as part of a series of four measures that would be called up by the moderates’ petition.

One of the four, a bipartisan bill, deals with the Dreamers and provides more border security, but not by building the southwest border wall Trump demands. Despite its potential for support from both parties, Jordan said it is not what the “American people” want on immigration.

Last September, Trump announced he was ending the Deferred Action for Childhood Arrivals (DACA) program created in 2012 by then-President Barack Obama. It has protected some 800,000 undocumented immigrants from deportation, allowing them to study and work in the United States under temporary protection.

Trump called on Congress to pass legislation replacing DACA and providing permanent protections for the youths. But he has given conflicting statements on precisely what he would support and Congress missed a March 5 deadline for sending him a bill.

Like Trump, Ryan also has said he wants to deal with the DACA problem that has left the immigrants in limbo, but so far has refused to advance any bill.

Representative John Faso, a Republican who has signed the petition, told reporters: “I’m not happy with inaction” and noted that “time is running out” for Congress to do something before November’s congressional elections.

House Democratic leader Nancy Pelosi, noting Trump’s shifting positions, called for fast action and told reporters, “I don’t know if the president knows if he would veto” the bipartisan bill.