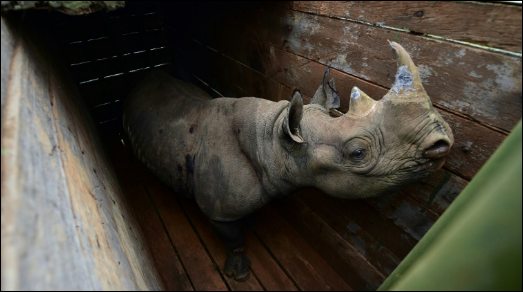 It was a disaster that left wildlife lovers around the globe appalled and baffled.

11 of Kenya's precious black rhinos were transferred to a new home in what was supposed to be a routine operation in a country fabled for its conservation.

So how did all of them end up dead?

The primary cause of death, an official report found, was due to toxic levels of salt in the water of their sanctuary.

But an AFP investigation has found that the problem was well known and deep concerns were ignored.

Yet the relocation project was pushed through – and officials are now blaming each other for the fiasco.

The translocation was launched with great fanfare in late June by Kenya's tourism and wildlife minister, Najib Balala, and the World Wildlife Fund (WWF), which donated a million US dollars (860,000 euros) for the project.

Dubbed #TheBigMove, the operation would help ensure the survival of a species brutally depleted by poaching.

The International Union for Conservation of Nature (IUCN) describes the black rhinoceros (Diceros bicornis) as Critically Endangered -- just one step away from being extinct in the wild.

Rhino from parks in Nairobi and Nakuru were sedated, loaded and transported to a new sanctuary in Tsavo East, a project that the Kenya Wildlife Service (KWS) and WWF had spent six years preparing.

There, the rhino drank borehole water so salty that it corroded a metal grill around the pump valve, and no other wildlife would come near it, said Dr. Benson Kibore, head of Kenya's Union of Veterinary Practitioners.

The saline water made the animals only thirstier, pushing them to drink more, drawing water out of their body tissue, thickening and slowing their blood. They were "desiccated", said Kibore.

A rhino named Bolt was the first to die, and the others soon followed. The last, Jack, was so weakened he could not fend off a lion attack that left him wobbling and alone, with huge gashes in his side before he succumbed days later.

"I was horrified. I was very certain there was going to be a very big problem with those rhinos," said Nehemiah Rotich, a veteran conservationist and former KWS chairman.

At the time of the translocation, he was the chief operating officer but had been tasked by the KWS board with looking closely into the project.

Rotich and some former members of the board – the oversight body which has to approve major management decisions – said they had blocked the transfer multiple times due to fears about the saline borehole water and the lack of vegetation.

"The site chosen wasn't a good one," Rotich told AFP. He visited it twice, arguing it was too arid and far from a river, requiring the drilling of two boreholes.

Discord came to a head in 2016, former board member Brian Heath said.

The board was told with just days' notice that a big ceremony was planned by KWS and the WWF to launch the transfer, just as a punishing drought was taking hold, he said.

But pressure persisted, he said.

Both Heath and Rotich accused the WWF of "pushing hard" for the translocation. Their anger was echoed last week by prominent conservationist and former KWS chair Richard Leakey, who in a parliamentary submission slammed the WWF for "interference."

In October 2017, the board gave conditional approval for the translocation pending improved conditions at the site.

The board's mandate expired in April 2018.

By that time, the green light for the translocation had still not been given to the management.

Even so, the operation went ahead three months later – in the absence of a new board.

Evidence of the tussle over the translocation comes from a meeting in May 2017 attended by KWS officials and WWF's chief rhino expert, Martin Mulama.

Two sets of minutes were written, according to documents seen by AFP.

The first made no mention of concerns, but was amended after complaints from some present, leading to a second version that included the warning: "The prevailing habitat could not allow any translocation to take place."

A series of 15 water assessments by KWS, conducted between February and May this year, indicated that the water was at times up to three times saltier than recommended levels.

But Kibore claims that these crucial documents were not provided to vets even when the first rhino fell sick.

As a result, the vets wasted valuable time looking for other causes, such as snakebites.

WWF's Mulama strongly denied pressuring anyone to push ahead with the translocation and insisted that sole responsibility lay with the KWS.

The WWF, he said, was not aware of problems with the sanctuary and had received "regular assurances from KWS that the site was suitable and safe."

"At no time would we do anything detrimental to the species we were trying to protect," Mulama said.

Former KWS board members accuse Balala of using his ministerial powers to authorize the transfer in their absence. Some observers have called for his resignation.

However, the minister, an energetic pitchman with a penchant for colorful bow ties, denied any decision-making role and in turn blames the board, telling AFP that if it had been so unhappy with the site, it should have canceled the project entirely.

"My invitation [to the launch] was purely ceremonial. Did I know about water? Did I know the board was objecting? I was not even aware," he told AFP.

"If they want me to resign, just prove what role did I have in the process of the translocation," he said.

For Kenyan conservationist Paula Kahumbu, the problem is far greater than the wrangle of which individual signed off on the calamitous mission.

"Things failed at multiple levels, the lack of accountability from various authorities is of great concern," she said.

Kahumbu said the signs of turbulence within KWS, and recent developments such as the building of railways through national parks, and other encroaching infrastructure show it is "a very, very dark time for Kenya" and its wildlife.