How are European governments helping people deal with rising prices?

Prices of energy, commodities and basic necessities have been rising due to pandemic-related disruption to global supply chains and the impact of Russia's war in Ukraine. 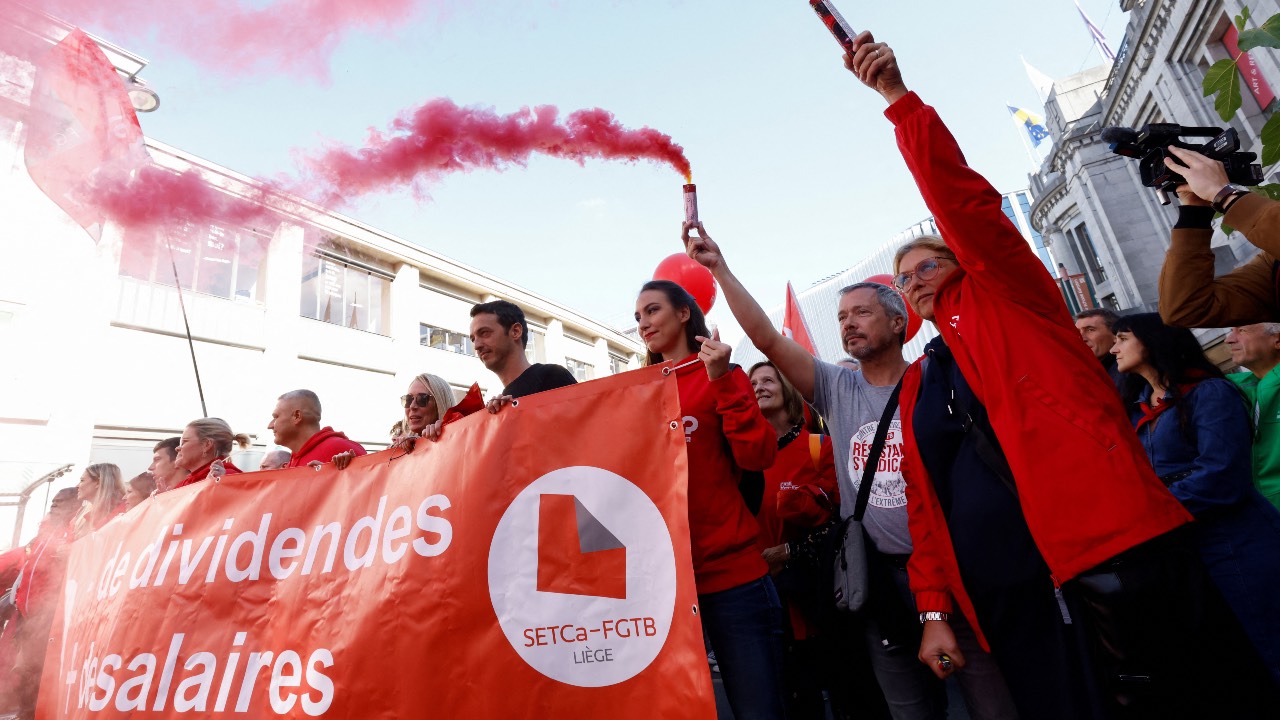 Protestors hold up smoke flares, as they take part in a demonstration against the rising cost of living, in Brussels, Belgium. /Yves Herman/Reuters via CGTN

Governments across the globe have been forced to introduce measures to offer relief to individuals and business who have been hit hard by this shift.

"Energy crisis is playing a big role here, especially in Europe. But regardless ... what we see is that the outlook provided by the ECB (European Central Bank) envisages much stronger inflation rates, [even] in countries like the U.S. where actually the war has been less of a factor," Marco Valli, Chief European Economist at UniCredit, told CGTN.

"So this means that you have underlying price pressure building up and on top of that you have the effect of the war, including energy and food prices. This leads to a global outlook where you have higher inflation, weaker growth and much more aggressive central banks and financing conditions ... and that's not a good mix for future growth outlook," added Valli.

So what are governments able to do to counter act the problems? In recent weeks there has been a variety of different economic measures introduced to help the public, here is a round-up of some of those from across Europe.

The UK's Finance Minister Kwasi Kwarteng announced a mini-budget in a bid to grow the economy by funding the biggest tax cuts in 50 years with huge increases in government borrowing. The top rate of tax was reduced to 40 percent for the highest earners while 1 percent will be shaved off the income tax rate for the lowest earners in April 2023.

However, the £45-billion ($48.3 billion) package introduced to avert a recession plunged the pound to its lowest level against the dollar since 1985 and forced British government bond prices to collapse.

If the pound does not regain its value, the Bank of England could make an emergency interest rate rise despite having added 0.5 percent to the base rate just last week, taking it to 2.25 percent. The Bank of England said it would not hesitate to change interest rates and was monitoring markets "very closely."

"If this all goes wrong, the loser will be the country as a whole because we will have lower growth and a higher debt burden, higher future taxes and worse public services as a consequence."

The government had already announced that it will cap consumer energy bills for two years and support companies. This latest package is likely to cost over £100 billion ($114.02 billion). Meanwhile, the most recent figures show that inflation in the UK has decreased. The Office for National Statistics reported that the UK's rate of inflation decreased from 10.1 percent in July to 9.9 percent in August.

"I think that the slowdown in inflation will gather traction over the course of 2023 globally. And by 2024, I think in most areas, price stability will be restored," said Valli.

· Italy approved a new aid package worth some €14 billion ($13.96 billion) on September 16, officials told Reuters. Details of how it will be funded and who will benefit are still to be announced by the newly elected governement.

· Poland will spend over $6.34 billion to curb power costs and support companies. It will also raise the minimum wage twice next year, adding to previously announced subsidies and mortgage relief.

· Czechia will cap electricity and gas prices next year.

· Spain will slash VAT on gas to 5 percent from 21 percent, starting from October.

· Croatia will cap electricity prices from October 1 until March.

· Finland and Sweden will offer billions of dollars in liquidity guarantees to power companies.

· Denmark capped annual rent increases at 4 percent for the next two years in August, adding to previous measures.

· France adopted a €20 billion bill lifting pensions and some welfare payments on August 3.

· Türkiye increased its minimum wage by about 30 percent in July, adding to the 50 percent rise seen at the end of last year.

· In mid-September, Thailand extended a diesel tax cut and energy subsidies and raised the minimum wage.

· At least 10 Indian states have announced a total of more than $12.6 billion of support, mainly in cash transfers and electricity subsidies, officials said. The government has also set up a panel to review the pricing of locally produced gas.

· In July, Chile announced a $1.2 billion aid plan, including labor subsidies and one-time payments for those most affected.