WORLD How Chinese solar panels could power the future in Argentina

How Chinese solar panels could power the future in Argentina

BUENOS AIRES, July 4 (Xinhua) -- The Sarti family is no different from a typical family of five living in Argentina's capital Buenos Aires, except for one significant difference: they recently became the first household in the city to supply the local electricity grid with energy produced at home. 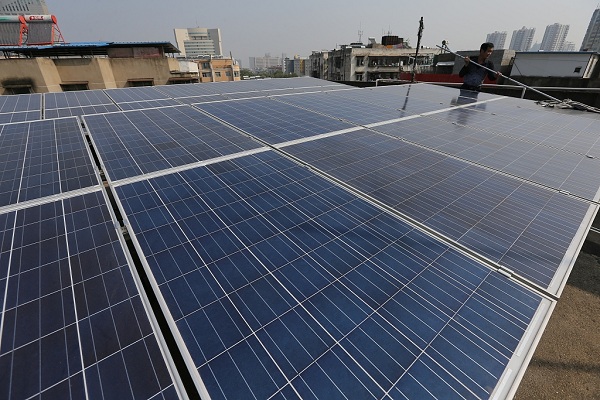 Earlier this year the Sartis decided to install 12 Chinese-made solar panels. Authorities then equipped them with a bidirectional meter, which can show the flow of current that powers the household and the surplus that is fed into the electricity network.

The household is now recognized by a nationwide program -- promoted by a new law called Distributed Generation of Renewable Energy Sources -- as both a user and generator of energy.

"We installed a photovoltaic energy system to supply the household's consumption and, through the new Distributed Generation law, the surpluses can be returned to the grid," Ricardo Sarti, an engineer, told Xinhua at his home in the neighborhood of Belgrano.

Ricardo, who has worked in renewable energies for 15 years, said his household is "the first in Buenos Aires" to contribute to the grid, but not the first in the country, because "there are others in other provinces."

The law was passed in March, and by April the family had begun the process of switching to solar power.

"There were several stages, such as reserving the amount of power (the home) needed. Then the electric company checks if the equipment at home complies with all the norms, and finally, the company replaces the meter with a bidirectional meter," said Ricardo.

Besides tax breaks for users and other incentives, the government has helped lower the cost of installing solar power systems to promote the scheme, he noted.

Ricardo said the system is new in Buenos Aires, but it has been in existence for decades elsewhere in the world.

The system does not generate energy "centrally," but can "distribute the energy generated throughout a whole city or province," he said.

The benefits of this plan have become clearer since the largest blackout in Argentina's history struck on June 16, which left as many as 44 million Argentinians in the dark. Preliminary reports suggested problems with high-voltage transmission lines caused the outages but government authorities have not yet confirmed the claim.

"The issue is that something like a faulty wire can affect an entire city ... and with this system, if the generators continue to operate in many places, they will continue to deliver electricity," he said.

The Chinese-made solar panels have many advantages, noted Ricardo. If one panel is damaged, the others continue working.

"In addition, they can be monitored remotely, and we can see how much current and how much power each of the panels is generating during daylight hours," he said.

"The micro-inverters are from a U.S. company, but they are manufactured in China. They are cheap and simple to install, so there is no need for high-level professionals to be hired because it does not involve the use of high voltage," said Ricardo.

He expects that such solar power systems will become more commonplace as they become more affordable.

"The use of this type of system will gradually grow, as the price of all of these components drops and the price of electricity continues to rise," he said.

"To give you an idea, the price of photovoltaic modules dropped 40 percent in the past year and a half," Ricardo said. "In the long term, everyone who has a house will be able to supply a large part of his own energy needs."