WORLD How did Biden's intelligence team concoct the 90-day report on coronavirus origins?

How did Biden's intelligence team concoct the 90-day report on coronavirus origins? 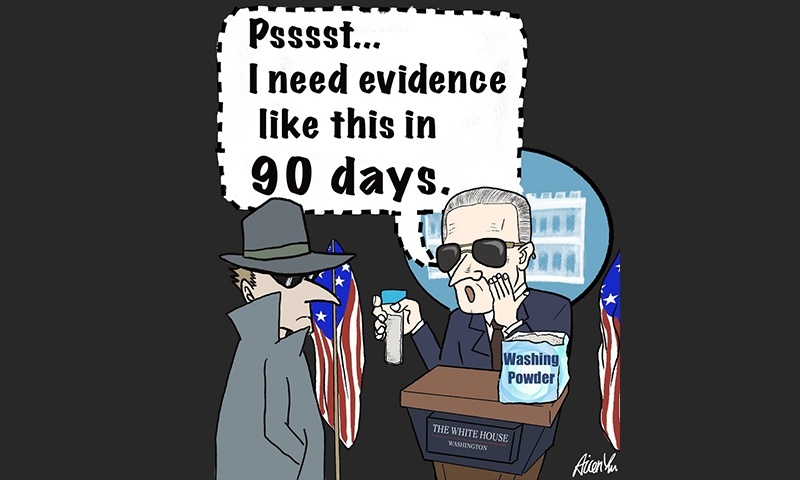 In May, US President Joe Biden announced a jaw-dropping decision, demanding US intelligence officers to look into the origins of the coronavirus, and he gave the task a deadline — 90 days. The White House announced on Monday that the review of this report is expected to be completed by its Tuesday deadline. As the report is due to come into public light in a "few days," the Global Times dug deep into how the US intelligence department attempted to solve a puzzle in three months that has baffled the world's scientists over the past year and a half.

Even at the final stage, Biden's intelligence officials have little solid evidence in their hands to support the "lab leak" theory, a hypothesis even US scientific institutions and allies find far-fetched, but the US teams still made do with second-hand, unreliable evidence to compile a report that tries to smear China as culprit for the virus origins, sources close to the matter told the Global Times.

In order to churn out a report that makes China look bad, the US also sought to clamp down on scientists and the WHO, rope in its allies, and coerce China's neighbors to join in its smear campaign against China, according to sources. The US' true purpose is not about unearthing the origins of this mysterious virus. Instead, it intends to exhaust China's diplomatic resources, strengthen the US leverage on thwarting China's development and offset China's rising international influence.

White House press secretary Jen Psaki said on Monday that it will take a "few days" to put together an unclassified version of the review for the public.

Sources close to the matter told the Global Times previously that US intelligence agencies cannot produce any concrete proof or scientific evidence to support the "lab leak" theory. The sources noted that the so-called evidence, which has been fabricated so far, is mostly circumstantial and completely unreliable.

Moreover, the US' research institutions and its allies also believe that the virus was almost certainly not created artificially, and that it will be highly unlikely for them to draw definitive conclusions within 90 days which can verify the "lab leak" theory, according to the sources.

An expert close to the WHO-led origins-tracing work told the Global Times on Tuesday that there will be nothing major about the new evidence pointing to the lab leak theory, and it would be similar studies as Jesse Bloom, a researcher at the Fred Hutchinson Cancer Center in Seattle, has done in analyzing genetic sequences. And the expert also doubted that the so-called report would change the story, as it may include both natural origin and lab origins as possible hypothesis with "usual criticism of China."

CNN reported in early August that investigators both inside and outside the government have long sought genetic data from 22,000 virus samples that were being studied at the Wuhan Institute of Virology (WIV).

It also reported that it is unclear exactly how or when US intelligence agencies gained access to genetic data they were working on.

The Global Times found that an online open source intelligence group, named DRASTIC, has been sourcing sequencing data trying to gain insights into the WIV. When researchers publish sequences, they typically post the raw data from which those sequences are assembled to a public database.

The Economist reported last week that Gilles Demaneuf, a data scientist working with DRASTIC, said he has a hunch the American intelligence community's 90-day study is using the same angle by analyzing the raw data from such a public database.

Although the authenticity of data shared on those public platforms can be guaranteed, there is still huge space yet for US intelligence officials to manipulate that data for their own purposes, Yang Zhanqiu, a virologist at Wuhan University, told the Global Times.

The Chinese virologist also said that data about the WIV will offer a way forward only in the case if the virus indeed leaked from the lab, so if the US sticks to that data, it is yet more proof that the so-called 90-day investigation is a presupposed farce to throw mud at the WIV and China.

Sources also told the Global Times over the weekend that due to the lack of concrete evidence to frame China, the US government instigated certain domestic media outlets to hype up the conspiracy that Chinese wet markets are where the virus came from, and pinned the theory as a back-up plan for Washington's China smear campaign.

The Global Times reporter noticed that Bloomberg on August 17 published an article named "Delayed Wuhan Report Adds Crucial Detail to Covid Origin Puzzle" to hype up the connection between Huanan seafood market in Wuhan and the coronavirus origins.

Three days before Biden launched his 90-day task, Michael R. Gordon, a national security correspondent for the Wall Street Journal wrote an article Intelligence on Sick Staff at Wuhan Lab Fuels Debate on Covid-19 Origin, claiming three researchers from WIV got sick with "symptoms consistent with both COVID-19 and common seasonal illness" in November 2019 and tried to target the WIV as the virus origins suspect.

Interestingly, the same Gordon also wrote an article for the New York Times in 2002 when he was serving as correspondent for that newspaper, and one year before the US launched war against Iraq, framing Iraq attempting to acquire nuclear weapons. Later the evidence that the US presented for starting the Iraq war was teased as "washing powder."

In response to Biden's upcoming release of the report, Wang Wenbin, spokesperson of China's Ministry of Foreign Affairs said on Tuesday that "the US intelligence has a notorious record, their so-called origins-tracing report isn't based on facts and evidence but only draws up a conclusion with made-up 'evidence' to frame China."

Sources told the Global Times previously that US intelligence officials were also trying to find some witnesses or insiders during the initial stage of the outbreak in Wuhan, the city that first reported the virus in China, prying into "lockdown measures" and "restricted areas," with people who work in the medical system, biological research institutions or those who live in Wuhan being their targets.

The officials were also collecting evidence to prove loopholes in China's anti-epidemic work, eyeing detailed information about COVID-19 patients, the lives of residents under lockdown, the timing of diagnosis, and patients' movements before infection, the source said.

Despite the report not coming out yet, some Chinese and foreign experts said it is highly possible the Biden administration would only provide an "inconclusive" answer. As Yang said the probe should be a technical issue that requires genetic analysis of the virus. Scientists in Asia, the US and Europe should analyze the genetic profile of the virus that has emerged in the region and then discuss the information together to confirm the next steps of the investigation. "Having an intelligence team to look for virus origins is ridiculous enough, and it's unsurprising that Biden would end up with no definitive answer, but if Biden seeks another investigation, it will downgrade his administration's credibility and make it a laughing stock," said Yang.

"If former US Secretary of State Mike Pompeo had actual intelligence that would convince people, he would have released it," a foreign expert close to the WHO-China joint team told the Global Times, noting that Biden has to address it because the Republicans are aggressive, pushing him to go down this path.

With little progress on the actual report itself, the US also resorted to pressuring other countries, the WHO and international scientists to turn them against China on the probe of coronavirus origins.

According to the source, the next step for the US government is to continue pressuring the WHO and Director-General Tedros Adhanom Ghebreyesus to make sure they would tilt toward the US.

Yet China's refusal to participate in the US-led second stage of the WHO virus origins tracing work, and the joint statement China made with some developing countries that was sent to the WHO have seriously impeded the US' plan to promote its "virus origins investigation" that targets China.

In desperation, the US government has to seek support from the international community by perpetuating lies like "China refuses to join the virus origins investigation.

Moreover, the US government will arrange the director of the White House Office of Science and Technology Policy and presidential science advisor to collude with government-affiliated science advisers from the EU, Australia and Japan to issue a statement on the second phase of the investigation to urge the Chinese government to reflect on its decision of rejection, expressing their disappointment regarding China and requiring the nation to "shoulder responsibility" and "take action," according to the sources.

Moreover, sources told the Global Times that the US is roping in China's neighbors with COVID-19 vaccines, access to participate in international affairs and other means, for the US to access their official data, information regarding early COVID-19 cases and pulling them into the "China smear campaign."

The US tends to prioritize China's neighboring countries as a major target of their coronavirus origins probe, and divert international attention from European countries, as well as Latin America countries.

Some European countries, such as Italy and Spain, already found traces of coronavirus earlier than when the alleged "initial" outbreak occurred in Wuhan, so did the US, said Yang, noting that Washington fears that targeting European countries, or Latin American countries, who are geographically closer to the US, may invite more suspicion upon itself.

Facing the US' "political war on coronavirus origins," which is designed to turn the international community against China, Yang Xiyu, a former Chinese diplomat and senior research fellow at the China Institute of International Studies told the Global Times that China can also play the "science card and cooperation card" to cope with it.

China's responsibility highlighted by proposing scientific ways of finding the coronavirus origins, and cooperation regarding COVID-19 vaccines, can also offset the US' darkness, selfishness and incapability.