WORLD How does coronavirus spread at a concert? Germans do a test

How does coronavirus spread at a concert? Germans do a test

Germany held a pop concert Saturday to see how those attending could spread coronavirus if they had it. 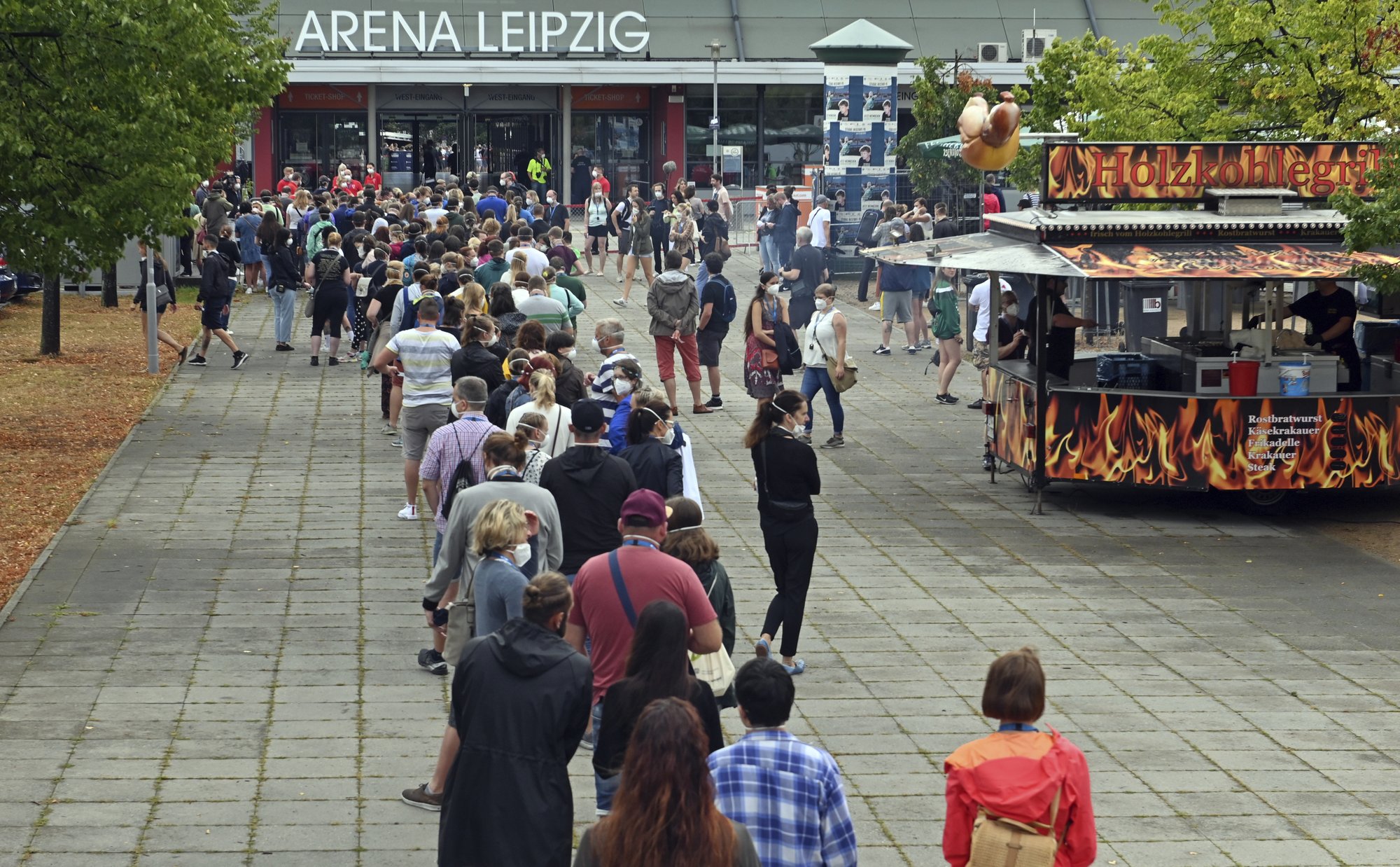 22 August 2020, Saxony, Leipzig: Test persons of a large-scale experiment of the University Medicine Halle/Saale are standing at the entrance in front of the Arena Leipzig. (Photo: AP)

German researchers studying COVID-19 packed part of a Leipzig arena with volunteers, collecting data in a "real life" simulation of a pop concert but one with strict health and safety controls.

About 1,500 people took part in the experiment run by the University Hospital in Halle, each taking a coronavirus test ahead of time, testing negative, and having to wear protective masks throughout the day's testing.

Researchers equipped each volunteer with contact tracers to record their routes in the arena and track the path of the aerosols — the small particles that could carry the virus — they emitted as they mingled and talked. Fluorescent disinfectants were used to highlight which surfaces at the mock concert were touched most frequently.

German pop singer Tim Bendzko appeared on stage to create as realistic a reaction from the crowd as possible for three scenarios.

Afterward, he said he had expected the day to feel more sterile and like an experiment but that the crowd was into the concert.

"We really had a lot of fun," he said. "We survived drive-in concerts this summer and in that respect, for us, this is a first step toward normalcy."

Under the first scenario, which simulated the very beginning of a pandemic, the concert-goers were kept close together in the room with no social distancing. In the second, the researchers instituted hygiene measures and larger social distances between the volunteers. In the third, a distance of 1.5 meters (5 feet) between participants was strictly enforced.

Stefan Moritz, who led the study, said researchers had only about a third of the volunteers they had hoped for, partially because many Germans are still away on summer holidays and partially due to fears of participating even with the safety measures taken. But he said the experiment had gone well.

"We are satisfied with the numbers," he told reporters. "We have good data quality."

The results of the study are expected in four to six weeks, he said.

In general, Germany has been praised for its handling of the pandemic with its rapid response and robust testing. It has registered only 9,267 confirmed virus deaths so far, one-fourth of Britain's virus death toll.

But the numbers have been rising recently, and Germany's disease control center reported 2,034 new cases of COVID-19 on Saturday, the first time the daily national increase has topped 2,000 since the end of April.

The Robert Koch Institute said coronavirus outbreaks are being reported in nursing homes, hospitals, schools and "especially among travelers and in the context of religious or family events."

"The trend is very concerning," the agency said.

Germany's 16 states are in the process of resuming in-class teaching at schools. The possible risks of virus clusters building up in educational institutions and then spreading to families and further into society has been a matter of great concern.

In Berlin, one of the first states to return, at least 41 schools this week reported that students or teachers have become infected, and hundreds of them have been put into quarantine.