WORLD How far are RCEP talks away from year-end deadline?

How far are RCEP talks away from year-end deadline?

The negotiations on the Regional Comprehensive Economic Partnership (RCEP) have reached its final stage. The Association of Southeast Asian Nations (ASEAN) and six dialogue partners – China, Japan, India, South Korea, Australia, and New Zealand – have vowed to wrap up talks this year as planned.

As it draws closer to the third RCEP Leaders' Summit on November 4, what has been achieved and what is yet to be settled?

Will the leaders be able to announce a breakthrough on the 16-nation pact when they gather for meetings hosted by the ASEAN?

The RCEP talks were launched in November 2012, with the goal of achieving a modern, comprehensive, high-quality, and mutually beneficial economic partnership agreement among the 16 countries.

If signed, the pact will be the world's biggest regional trade agreement. Together, the countries cover nearly half of the global population, a third of the world economy, global trade and global investment flows. 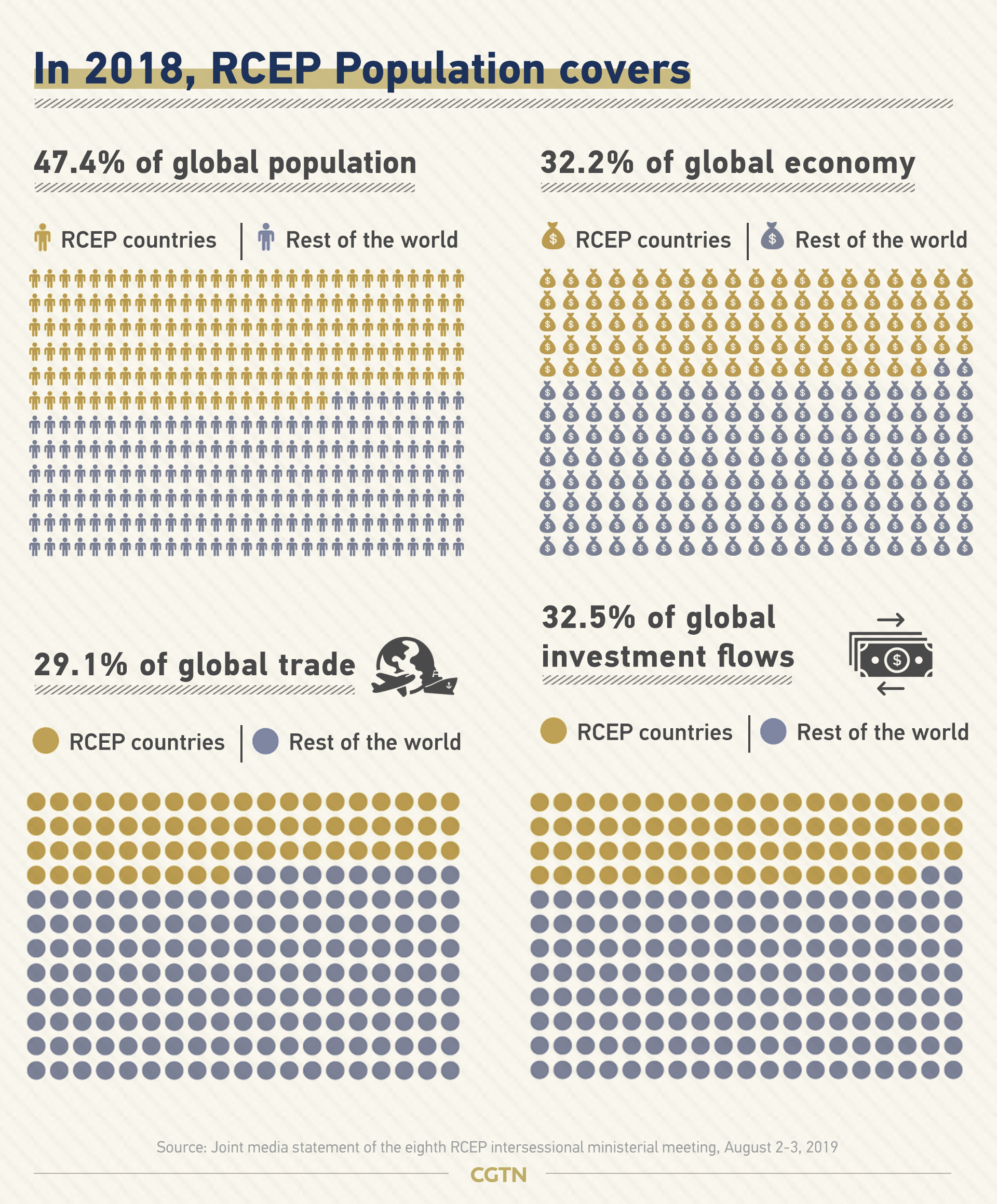 The RCEP is often seen as a rival to the Trans-Pacific Partnership (TPP), a pact once led by the U.S. before President Donald Trump withdrew from it early in his tenure.

RCEP negotiations have been ongoing since 2013 but progress has been slow as member countries have been unable to agree on key terms such as the movement of labor, treatment of services and market access.

But all members are determined to reach a conclusion at the end of this year.

The joint leaders' statement at the end of 2018 welcomed the conclusion of seven chapters – Economic and Technical Cooperation, Small and Medium Enterprises, Customs Procedures and Trade Facilitation, Government Procurement, Institutional Provisions, Sanitary and Phytosanitary Measures, and Standards, Technical Regulations and Conformity Assessment Procedures, of which five were concluded in 2018.

The 28th round of negotiations in Da Nang, Vietnam, on September 19-27 led to the conclusion of 13 of the 20 chapters.

Thai Deputy Prime Minister and Commerce Minister Jurin Laksanawisit said RCEP negotiations have been concluded on 14 out of 20 chapters, after chairing the ninth RCEP ministerial meeting on October 12. He was optimistic that the remaining six chapters will be concluded before the 35th ASEAN Summit held from November 2 to 4.

With the negotiation now heading into the final stretch, negotiators are still working hard to come to terms on at least four outstanding chapters of the 20-chapter text, namely rules of origin, investment,  trade remedies, and e-commerce.

The 10 ASEAN member countries and six trading partners remain optimistic about making a breakthrough on the deal during the 35th ASEAN Summit in Bangkok, Jurin said after the Asean Economic Community (AEC) Council in Bangkok on Thursday.

He made the comments despite negotiators' concerns about India's reluctance to accept an RCEP deal.

India has long been the main holdout on an RCEP deal because of strong domestic opposition over fears the domestic industries and farmers would be hurt when tariffs drop.

Prime Minister Narendra Modi, who is fresh off a landslide re-election win in May, agreed to move ahead with the deal after meeting Chinese President Xi Jinping in an informal seaside meeting in October.

China has long pushed to conclude the pact.