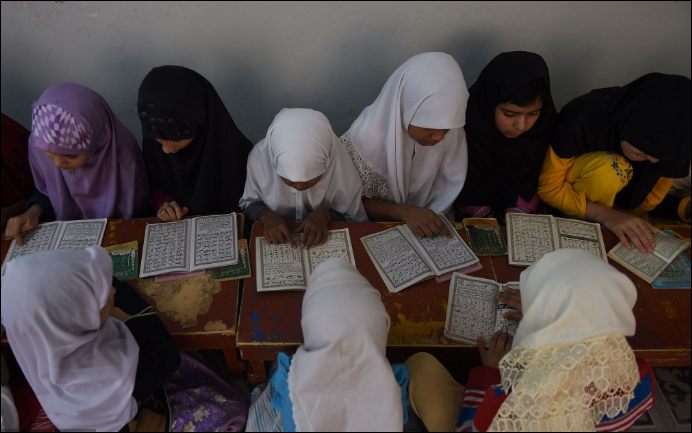 The Stanford Social Innovation Review says Pakistan contributes more than one percent of its GDP to charity. On top of that, a study by the Pakistan Centre for Philanthropy shows that citizens give more than two billion US dollars annually to charity.

Six-year-old Maryam was abandoned at the doorstep of Edhi home, an orphanage centre, in Islamabad as a newborn. Today, she's a happy girl who loves to read and play.

"I go to school, I read the holy Quran, then we say our prayers, and later we have lunch. In the evenings we play, do our homework and then have dinner before going to bed," said Maryam while narrating her daily schedule.

Maryam is just one of 50,000 babies rescued by the Edhi Foundation in Pakistan. The Foundation runs a cradle service, where parents can leave a newborn baby they don't want to keep.

"When Edhi sahib established the foundation, he put the first cradle outside its door, so that people who for some reason want to get rid of their child should leave it here, instead of killing it," said Shakeel Ahmad, in-charge of Edhi home in Islamabad.

According to the United Nations, somewhere between 1.2-1.5 million children are estimated to be living on the streets of Pakistan.

These kids are vulnerable to dangers of sexual abuse and trafficking. Hundreds of child abuse cases are reported every year, but the perpetrators manage to get away scot-free. Experts say, a lot needs to be done to strengthen child protection laws in the country.

According to Justice Ali Nawaz Chohan, chairman of the National Commission on Human Rights, amendments in the old law have been made but still a lot needs to be done to bring the law in conformity with the UN Convention of Rights of the Child.

The Edhi Foundation is working tirelessly to bridge the gap.

Edhi Foundation has set up 18 orphan homes across Pakistan, accommodating over 100 children in Islamabad alone. Most of these children are mentally and physically challenged.

The Foundation, established in 1951, was the brainchild of philanthropist Abdul Sattar Edhi.

Edhi is a household name in Pakistan, who dedicated his whole life to ascetic and humanitarian causes. He passed away in 2016, at the age of 88, but he left behind a lasting legacy.

Today, the Edhi Foundation spearheads social welfare service providers, working in Pakistan and across the world, on a non-commercial, non-political and non-communal basis.

It's fueled by over ten thousand volunteers across the country, feeding the poor and elderly subjected to torture and neglect by their families, supporting the ailing by providing them with free medication.

The foundation owns a fleet of over 1,800 private ambulances stationed across Pakistan.

It also provides free technical education to the needy to make them self-sufficient.

"My religion is humanitarianism, which is the basis of every religion in the world," said Abdul Sattar Edhi, Pakistan's legendary philanthropist in his autobiography, "A Mirror To The Blind".