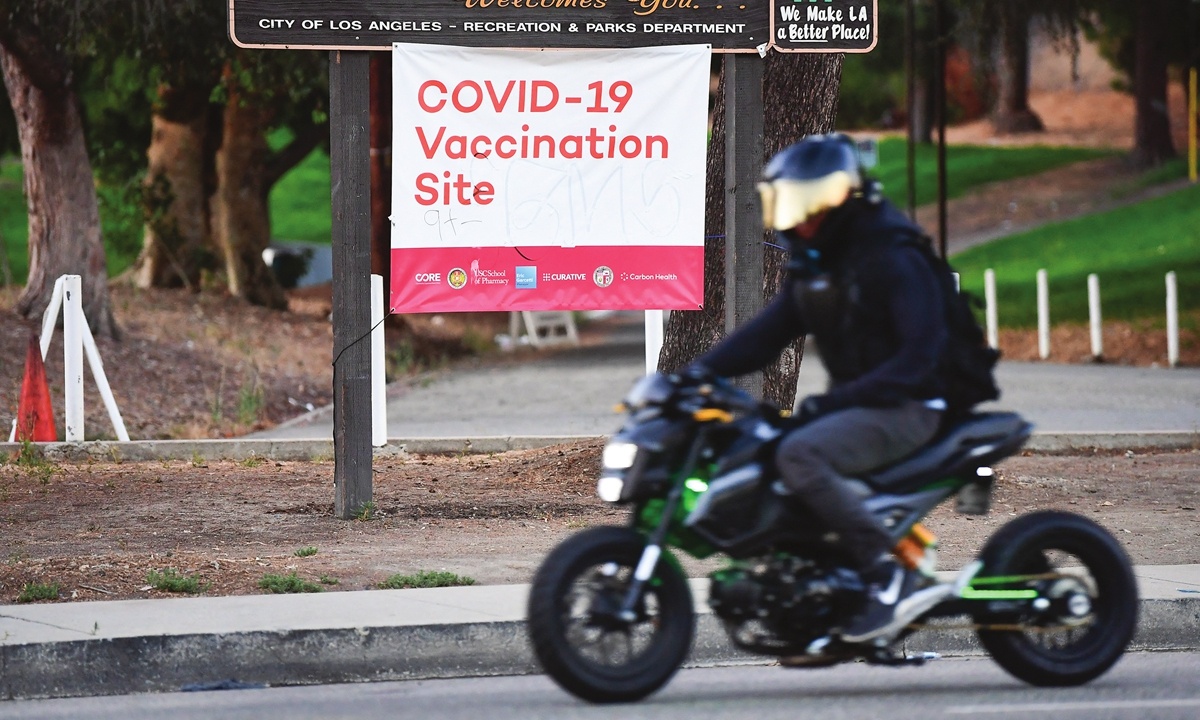 A motorcyclist rides past a COVID-19 vaccine site in Los Angeles, California on July 6, 2021. (Photo: AFP)

Thanks to Bloomberg's efforts to keep revising the algorithms, the United States has finally emerged as the anti-pandemic "winner" in an "authoritative media" ranking.

In late June, Bloomberg published the latest edition of its "COVID-19 resilience ranking", in which the US, with more than 33.9 million confirmed cases and 600,000 deaths, occupied the first place and became the "world's largest anti-pandemic country." Meanwhile, China, which has effectively contained the pandemic with only sporadic domestic confirmed cases, ranked eighth, causing worldwide condemnation and a storm of anger from Chinese netizens.

In the controversial ranking titled "The best and worst places to be as the world finally reopens," Bloomberg "innovatively" introduced some indicators to highlight the alleged reopening progress. However, it deliberately omitted key elements such as the confirmed COVID-19 cases and number of deaths.

"The US is now the best place to be as virus deaths plunge, the economy reopens and travel restarts," this "authoritative" news outlet said with relief on its Twitter account.

However, the fact is that Bloomberg reporters, through page after page of tailor-made rankings and countless evasive reports, have sought to play down China's achievements in fighting the pandemic and elevate the US, from a pandemic-ravaged country, to the top of the anti-pandemic country list by touting its unique achievements.

The Global Times found that the Bloomberg's "resilience ranking," first published in November last year, ranked the US and China in the 18th and eighth places respectively. In addition to the key monthly COVID-19 confirmed cases and fatality rates, there is also an important metric for the ranking, the access to COVID-19 vaccines, which looks at "the number of [vaccines] supply agreements each place."

However, in subsequent editions of the ranking, Bloomberg arbitrarily changed the definition of the evaluation criteria, adding or subtracting indicators and modifying their weight in the scoring system. For example, in the second edition of the ranking published in December 2020, Bloomberg redefined the "Access to Covid Vaccines" indicator as "number of collated contracts and what percentage of a place's population is covered by its deals," and in January it added, "doses given per 100" as an indicator of the proportion of vaccines administered per 100 people.

Analysts pointed out that these new changes are not really informative but are perfect to limit the rise in the ranking of a country like China, with a very low number of confirmed cases and a large population.

The Global Times learned that in the latest ranking released on 28 June, the US jumped from 13th place in May to the top, largely in part because Bloomberg drastically reduced the score for indicators of "Covid status", including the number of confirmed cases and death rates, and considered lockdown and border pandemic prevention management to lower the ranking.

The Bloomberg vaguely explained that some countries and regions in Asia Pacific, like Singapore and Hong Kong, have previously performed well against the pandemic, but have slipped in the ranking as "strict border control measures remain in place with a zero-tolerance approach."

"The methodology they used seems to be scientific but how their data was pieced together and the factors they selected are absurd. The form of the ranking seems perfect, but the results are deceitful, " Shen Yi, professor at the School of International Relations and Public Affairs of Fudan University, told the Global Times.

"For Bloomberg, in order to protect and defend the interests of the US, they can use all technical methodologies to make this ranking look beautiful for the country," he said.

Observers noted that the key indicators "lockdown severity" and "flight capacity" were purposefully tailored by Bloomberg for China and the US based on its own past "objective" reports.

In early June, several new cases were reported in South China's Guangdong Province. In the face of restrictions by local authorities on inbound and outbound flights from Guangdong Province, Bloomberg Graphics gloatingly tweeted "The US takes back global aviation lead as Guangzhou outbreak forces Chinese airlines into retreat."

In line with the rankings, Bloomberg published a story on June 28 claiming that the US had achieved a "stunning turnaround" in the fight against the pandemic. "It turns out that the US did not have to succeed at containment to be the first major nation to essentially exit the pandemic," the report made the strange statement.

However, data from Johns Hopkins University show that an average of 19,455 new cases have been reported in the US in the past seven days.

Meanwhile, White House coronavirus coordinator, Jeff Zients, recently admitted at a briefing that the US missed president Biden's original goal of getting at least 70 percent of adults inoculated with the first shot of the coronavirus vaccine by July 4, the Washington Post reported.

As the Delta variant becomes more pervasive, the US is "losing time" in the vaccination race, CNN said.

This series of non-objective and unscientific ranking was produced by Rachel Chang and Jinshan Hong, two journalists from Hong Kong working for Bloomberg who have been writing articles targeting China.

The Global Times found that, when describing China's fight against the pandemic, the two journalists reversed the facts and claimed that China is falling behind on vaccinations and has no post-vaccine plan. On the contrary, while evaluating the efficacy of Western efforts, they praised the US and Europe rise in their fight against COVID-19.

"In the face of the pandemic, the two journalists who made the ranking deftly took advantage of the attitude of 'give me liberty or give me death'," Shen said, adding that this is a typical example of how "science" and media assets were used to serve politics and why ordinary people in Western countries increasingly reject science.