The Latest on President Donald Trump and the partial government shutdown (all times local):

The No. 2 House Democrat is blaming President Donald Trump for the partial government shutdown and says Trump is holding the government “hostage.” Maryland Democrat Steny Hoyer says Tuesday that “in another context, we would call that an act of kidnapping or terrorism.” 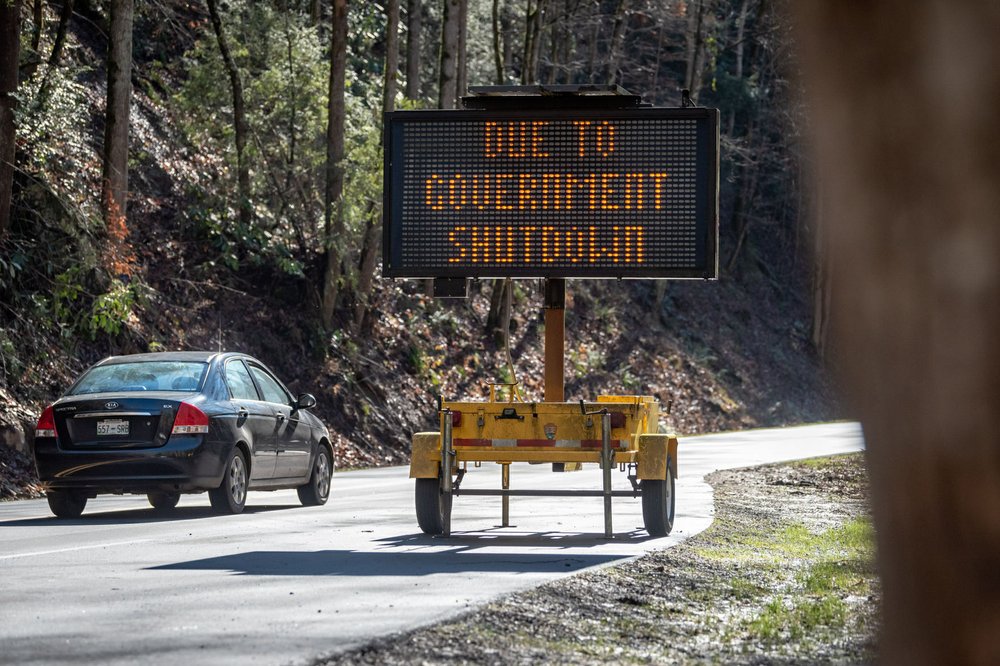 In this Saturday, Jan. 5, 2019, photo visitors to Great Smoky Mountain National Park drive through the park but facilities like the Sugarlands and Cades Cove visitor centers in Townsend, Tenn. (Photo: AP)

Hoyer says it would be akin to an imposition of martial law if Trump declares a national emergency in order to unilaterally build a Southwest border wall. He says Trump doesn’t have that authority and doing that “certainly could” be an abuse of power.

Hoyer compares it to other governments “declaring martial law and justifying them in doing whatever they want to do.”

Democrats are refusing to give Trump $5.7 billion to build the wall. The impasse has led to a partial government shutdown, now in its third week.

House Speaker Nancy Pelosi and Senate Minority Leader Chuck Schumer will give the Democratic response to President Donald Trump’s remarks to the nation Tuesday on his proposed wall on the US-Mexico border.

An impasse over wall funding has led to a partial government shutdown, now in its third week.

Pelosi and Schumer have flatly refused to pay for the wall. They said Tuesday they will deliver their response to Trump after his address at 9 p.m. EST.

Trump says there is a security crisis at the US-Mexico border that can be addressed only by spending $5.7 billion on a wall as a way to prevent people from crossing into the US illegally.

Trump said Friday that some previous presidents “have told me that we should have done it.”

The four living ex-presidents do not back Trump up on that claim. Jimmy Carter, Bill Clinton and George W. Bush said they had not discussed the wall with Trump. Barack Obama’s office reiterated his opposition to the wall.

Pence told NBC’s “Today” show on Tuesday, “I know the president has said that was his impression from previous presidents.”

Trump is scheduled to address the nation Tuesday night and lay out his case for the wall, which Democrats oppose. The government is in its third week of a partial shutdown over wall funding.

The message was made public Tuesday, the 18th day of the shutdown, as Trump prepared to make his case in a prime-time speech that there’s a US-Mexico border crisis that must be addressed. Trump wants billions of dollars to fund a border wall, which congressional Democrats oppose.

The governors say federal workers are being hurt and state business is being affected by shutdowns of federal departments and agencies. They warn shorelines are at risk with reduced Coast Guard capabilities.

With no breakthrough in sight, President Donald Trump is set to argue in a prime-time address that a “crisis” at the US-Mexico border requires the wall he’s demanding before ending the partial government shutdown.

Trump’s speech on Tuesday night will be followed by his visit Thursday to the southern border. White House press secretary Sarah Huckabee Sanders tweeted that he will use the visit to “meet with those on the front lines of the national security and humanitarian crisis.”

The administration is also at least talking about declaring a national emergency to allow Trump to move forward on the wall without Congress approving the $5.6 billion he wants.

In the meantime, hundreds of thousands of federal workers face missed paychecks Friday as the shutdown drags through a third week.