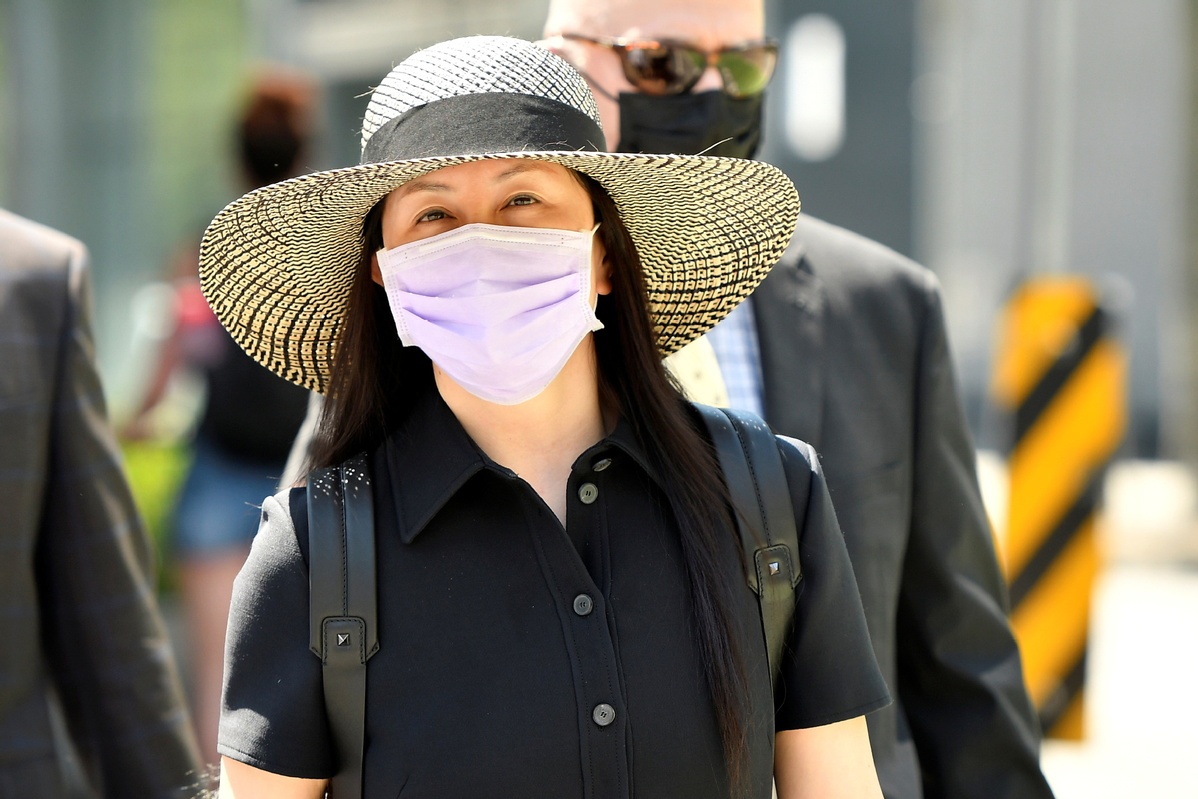 Meng Wanzhou, the chief financial officer of Huawei Technologies Co Ltd, on Tuesday sought to introduce new evidence in her extradition fight, which her defense said would "turn on its head" and "fatally" implicate US allegations if introduced.

According to Meng's defense team in the first day of a two-day hearing in British Columbia Supreme Court in Vancouver, documents from HSBC "demonstrate the false and misleading nature" of the US record of the case, on which the Canadian courts are being asked to rely.

If the new evidence is allowed, Meng will be able to rely on it at the committal stage of her extradition hearings, set to take place in August.

Meng, 49, was arrested by Canadian authorities at the US' request at Vancouver International Airport on Dec 1, 2018. She is accused of misrepresenting Huawei's relationship with Skycom in a PowerPoint presentation to HSBC in 2013 and putting the bank at risk of violating US sanctions against Iran, which Meng has denied.

Meng's defense team has claimed that HSBC is a "sophisticated institution, acting in the full knowledge of Huawei's affiliates and their corporate history".

Meng's legal team said that emails and documents submitted to a Canadian court showed at least two senior HSBC leaders were aware of connections between the Chinese telecommunications giant Huawei and its Iranian subsidiary, Skycom. HSBC declined to comment.

The defense is looking to use the documents to counter US charges that only junior employees of the British bank knew about the true nature of the relationship between Huawei and Skycom.

"As the case enters its next phase, Huawei remains confident in Meng Wanzhou's innocence. We will continue to support Ms. Meng's pursuit of justice and freedom," the statement said.

The documents show that the US argument is "so defective as to compel the courts to place no reliance on them", Mark Sandler, defense lawyer for Meng, told the court.

Responding to the defense application, Canada's attorney general argued that Huawei's interpretation of the documents is "irrelevant" to the extradition process and should be reserved for a fraud trial in the US.

Meng's lawyers have previously argued that the case should be dismissed due to political interference by former US president Donald Trump and that she was being used as a pawn in a trade war between the US and China.

The defense also alleged that the actions taken by the Canadian authorities violated her Canadian Charter rights at the time of her arrest by questioning her without a lawyer. Defense lawyers also said the charges against Meng at a meeting in Hong Kong outside of US criminal jurisdiction were brought in violation of international law.

The Hong Kong court agreed to release the HSBC documents in April after the defense lost a bid to get them through a judge in the United Kingdom.

Earlier this month, Meng's lawyers applied for a publication ban because the Hong Kong court had released the documents on the condition that Huawei protect the confidential information in the file.

Holmes has to decide whether the evidence is admissible and, if it is, Justice Minister David Lametti should re-evaluate the case and decide whether he should withdraw his authority to proceed.

The relationship between Canada and China has been fractured since Meng's arrest.

According to John Ivison, an Ottawa-based political columnist for the National Post, the new evidence in the Meng case is an opportunity for Lametti to end the proceedings.

"For those who argue that this would be interfering in the judicial process, it should be pointed out it is entirely legitimate for the attorney general to do so," said Ivison. "The case against Meng has always been spurious, and the new evidence makes it even more so."

The final portion of the extradition hearing will resume early in August after a three-month delay.