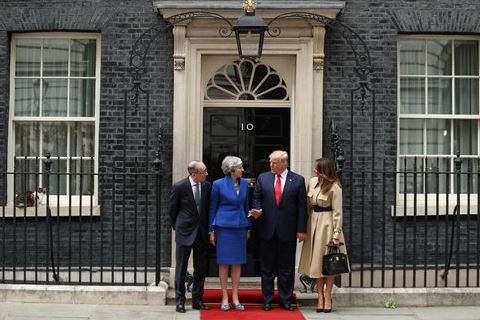 The UK has been carefully striving to strike a balance amid the China-US dispute and growing tension on the Huawei matter. With US President Donald Trump meeting with Prime Minister Theresa May on Tuesday to talk about so-called security risks caused by Huawei equipment over 5G networks, it is time to test Britain's integrity and independence in the face of superpower games. Ahead of his visit, Trump urged the UK - a member of the Five Eyes intelligence-sharing group - to be very careful about letting China's Huawei engage in its 5G network rollout. This has become part of Washington's broad efforts in lobbying its major allies to take tough stands against the Chinese company. High-level US officials have included Huawei in their rhetoric as they have been ramping up conflict with China, which has set off a new Cold War in the technology sphere. Ahead of the meeting, US Secretary of State Mike Pompeo also pressed the UK not to use Huawei technology. However, the UK, unlike other members of the Five Eyes including Australia and New Zealand, has not rushed into a hasty decision of rejecting Huawei from the local market. The company also played a crucial role in building the UK's 3G and 4G networks, and helped generate jobs and economic growth. "Huawei generated about 1.7 billion pounds ($2.2 billion) of economic benefits for the UK in 2018, up sixfold from 2012," Cheryl Xu, manager of corporate communications of Huawei UK, told the Global Times on Monday. Huawei will invest about 3 billion pounds by 2022 to collaborate with UK suppliers, she said. Faced with growing pressure from the US amid a brewing technology war, the UK has sought to reach a balance between China and the US, as it could not compromise its own interests to fulfill the purposes of Washington. British officials made a decision in April that Huawei would be allowed to provide some non-core technology in the UK's 5G networks, according to media reports. The company, which is also the largest telecoms equipment provider, is helping push forward 5G commercialization in the UK by working closely with local carriers. On Thursday, local carrier EE launched Britain's first 5G services, supported by Huawei base stations. Another local carrier - Vodafone - plans to launch 5G services with the help of Huawei products in July. Although May is set for a confrontation with Trump over Huawei, some UK officials who are seen possible successors to her may take a different stance. Conservative leaders such as Foreign Secretary Jeremy Hunt and Home Secretary Sajid Javid have expressed their concerns over Huawei and suggested reconsidering the decision on Huawei's involvement in 5G, which reflects a clear division in the cabinet on the issue, The Independent reported on Monday. "This division also shows British officials' divergence on China-related issues, whether to be in line with their traditional ally the US for political purposes or be practical to keep sound business relations with China," Cui Hongjian, director of EU Studies at the China Institute of International Studies, told the Global Times on Tuesday. The US side is using this transition period in the UK to enhance pro-America political forces by urging the UK to pick a side on the Huawei issue, he noted. "If the UK goes the other way, it may pay the price of not being able to access intelligence-sharing with the US, which it has been heavily dependent on," Cui said. Australia, as another Five Eyes country, has acceded to US requests by barring Huawei from building its 5G networks, a move that was considered as US interference and manipulation in Australia politics. From a technical perspective, the US accusation that Huawei poses national security risks is purely ridiculous, analysts said. "There is a consensus within the cybersecurity community that the perceived risks of Huawei 5G equipment don't make sense. Everything points to an economic trade war and not a cybersecurity risk," Kevin Curran, a professor at Ulster University, told the Global Times on Tuesday. Whether the UK will safeguard its own interests in 5G deployment or politicize the debate to cater to demands from the US, "this has become a test for Britain's superpower status too," Cui said.