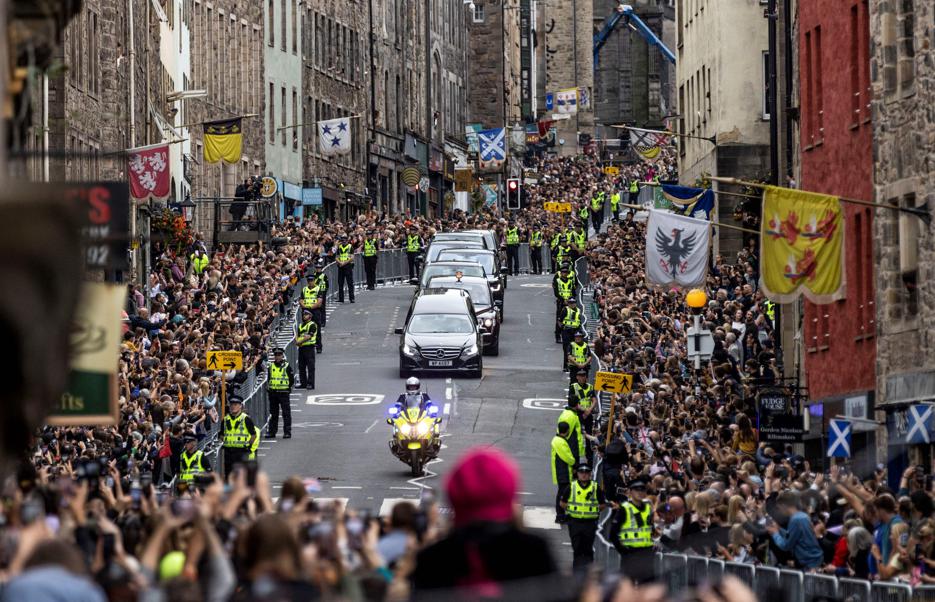 Members of the public gather along the Royal Mile to watch the hearse carrying the coffin of Queen Elizabeth II, as it is driven through Edinburgh towards the Palace of Holyroodhouse, on Sept 11, 2022. (Photo: Agencies)

Mourners hoping to pay their respects to the Queen Elizabeth II at Westminster Great Hall in the run-up to her funeral on Sept 19 will face airport-style security and have been warned to expect an extremely long wait, as details of her lying in state have been revealed.

The late monarch died at Balmoral Castle in Scotland last Thursday, aged 96, and her body was set to be brought back to London on Tuesday.

Her coffin, which will be closed, will be visible to the public 24 hours a day, from 5 pm on Sept 14 until 6:30 am on the morning of her funeral, a short distance away at Westminster Abbey.

The Times newspaper reports that as many as three-quarters of a million people could try to pay their respects, with official government guidelines saying "you will need to stand for many hours, possibly overnight … as the queue will keep moving". Details of where the line-up, which is predicted to be miles long, will form will be released on Tuesday evening.

Only "limited refreshments" will be available to those waiting, so mourners are advised to bring their own supplies, although these must all be consumed or discarded before entering the palace.

Any kind of tribute is prohibited, and can only be left at a dedicated area in London's Green Park, photography or filming of any kind are not permitted within the palace, and there are limits on the size of bags people are allowed to bring.

Any kind of camping equipment, foldable chairs, and sleeping bags are also not allowed.

Wristbands will be issued to mark someone's place in the line and only people with wristbands will be permitted to stay, so places cannot be held on behalf of someone who is not present or coming later.

Official guidelines also ask that people bear in mind the likely length of the wait, and restrictions faced, "before you decide to attend or bring children with you".

After days of torrential rain that followed one of the driest summers on record across much of the United Kingdom, the weather forecast for London for the days in which the queen will be lying in state is good, with forecasting bureau the Met Office saying there is a less than 10 percent chance of rain.

Before the coffin's return to London, it was set to lay overnight at St Giles's Cathedral in the Scottish capital, Edinburgh, for people there to pay their respects, following a service on Monday that was attended by the new king, Charles III, and other members of the royal family.

The high-profile list of attendees means security arrangements around the funeral will be some of the tightest London has ever seen.

Guidance notes seen by the Politico website advise overseas guests to keep their delegations as small as possible, with arrival on commercial rather than private flights preferred for practical purposes, and the journey to Westminster Abbey will be conducted en masse on buses, rather than in private cars.