Huge fire breaks out at primary school in east London 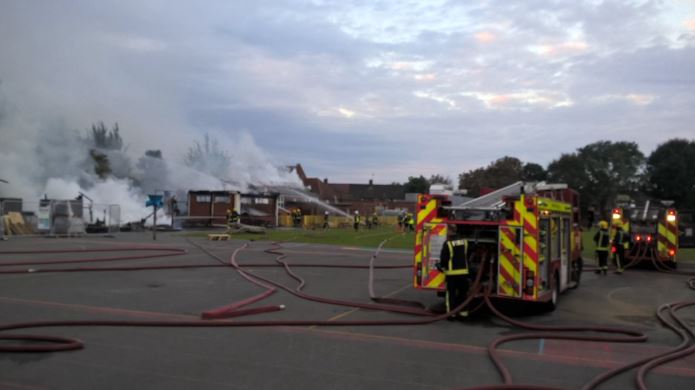 A total of 12 fire engines and around 80 firefighters are battling a fire early Tuesday at a primary school in east London, the London Fire Brigade said.

It is unknown whether there was anyone at the school located in Hewett Road of Dagenham, when the fire broke out in the early hours of the day.

Around half of the single-story building is currently ablaze.

The London Fire Brigade said the firefighters "are making steady progress" in tackling the fire, and the fire is now under control.

The brigade's station manager Rod Wainwright said, "Flames could be seen from some distance away and crews were faced with a serious blaze when they arrived on the scene."

"They worked very hard to bring the fire under control but given the intensity of the fire, there is unfortunately significant damage to the school," he said.

"It is unfortunate timing that this fire has occurred just before the start of term."

Crews removed a gas cylinder from the school building and have been cooling it down to prevent the risk of explosion.

Those who live nearby were told to keep their windows and doors shut due to the smoke.

A statement on the school's website said the children are set to return from the summer holiday on Wednesday.

The school has 1,300 pupils. It is unclear when the school will reopen.

Another school in the district has also been closed for the day due to the smoke.