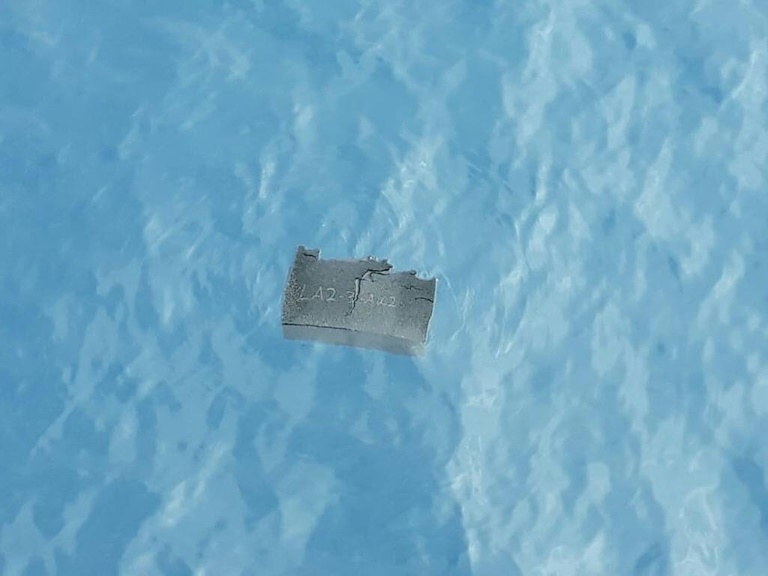 A piece of debris believed to be from the missing plane is shown in this Chilean Air Force photo. (Photo: AFP)

Rescuers have found human remains during the search for a Chilean air force plane that went missing en route to Antarctica with 38 people aboard, a provincial government leader said Wednesday.

Search teams are combing waters off the southern tip of South America for any sign of the C-130 Hercules transport aircraft, which disappeared late Monday.

Chile's military have yet to publicly announce the discovery but said earlier that search and rescue teams had recovered floating debris and personal items suspected to come from the plane.

But Jose Fernandez, the governor of sparsely populated Magallanes region in Chile's far south, said the air force had confirmed the find to him.

"They told us that they had found other airplane debris as well as human remains from those on board," Fernandez told reporters in provincial capital Punta Arenas, where many family members were gathering to be close to the rescue effort.

His comments came shortly after the air force issued a statement saying that, out of respect for family members, all information regarding remains will be "analyzed, validated and communicated" by the air force itself.

Earlier, the Chilean-flagged vessel Antarctic Endeavour located debris that "could be part of the remains of the sponges of the internal fuel tanks," Air Force Commander Eduardo Mosqueira told a press conference.

He added that the wreckage was located 30 kilometers from the plane's last known position when it disappeared from radar screens at 6:13 pm (2130 GMT) Monday, on the way to Chile's Eduardo Frei base on the Antarctic coast.

Wreckage recovered so far would reach Punta Arenas "tomorrow or in the next few days," Mosqueira said.

A Brazilian navy vessel has also recovered suspected wreckage from the plane.

"The parts of the plane and the objects were found approximately 280 nautical miles (520 kilometers) from Ushuaia in Argentina," Brazilian President Jair Bolsonaro wrote on Twitter.

"The Brazilian navy ship remains in the search area in coordinated actions with the Chilean authorities and two boats from the ship continue collecting remains," he added.

Search vessels and planes from the United States, Uruguay and Argentina were also combing nearly 1,000 square kilometers (385 square miles) around the plane's last known position in the Drake Passage, a tempestuous body of water south of Cape Horn.

Mosqueira said earlier that a decision had been taken to widen the search zone after improved visibility and weather conditions.

"We still don't have any new information, but we are making every effort to be able to find the plane," Chile government spokeswoman Karla Rubilar told local radio on Wednesday.

The Vatican said Pope Francis was following the situation closely and keeping the families of the missing in his prayers.

Most of those on the missing plane are air force personnel, but also aboard were three people from the army, two from a private construction company and an official from a Chilean university.

Many of them were traveling to carry out logistical support tasks at the base, Chile's largest in the Antarctic.