UNITED NATIONS, June 10 (Xinhua) -- The more than 350,000 people in Ethiopia's Tigray region classified in a catastrophic food condition is the highest number from a single country in a decade, a UN spokesman said on Thursday. 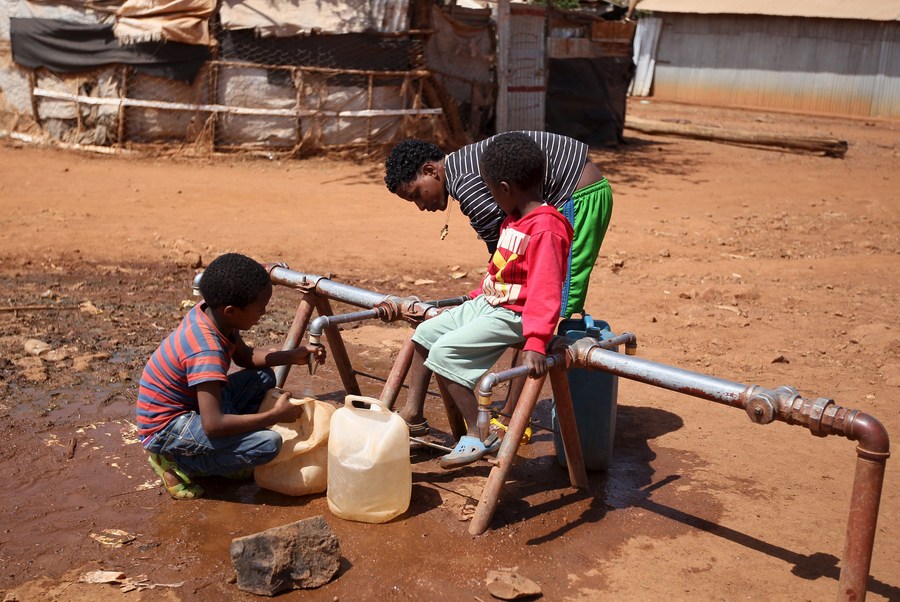 This file photo shows Eritrean refugee children fetch water from a tap at Mai-Aini refugee camp near the Eritrean boarder in the Tigrai region in Ethiopia on February 10, 2016. (Xinhua)

The World Food Programme (WFP), the Food and Agriculture Organization and the UN Children's Fund call for urgent action to address the dramatic, acute food insecurity in Tigray.

WFP Executive Director David Beasley said the agency mounted an emergency food assistance operation, deploying more than 180 staff and increasing food distribution to reach 1.4 million people. Yet, he said, this is barely half the number the United Nations should reach with aid.

Three things are needed to prevent hunger from claiming millions of lives in Tigray: a ceasefire, unimpeded access for all humanitarian partners, and money to expand operations to meet the growing numbers of people who desperately need emergency food assistance, Beasley said.

UN Undersecretary-General Mark Lowcock, the UN humanitarian coordinator, warned that the situation in Tigray would get a lot worse.

Speaking virtually at a high-level roundtable preceding the Group of Seven summit, Lowcock said the worst would be avoided if Tigray gets immediate relief. And, he said, a re-run of 1984 would have wide-ranging and long-lasting ramifications.

Up to 1 million people died in 1983-1985 drought-triggered famine in Ethiopia.

Humanitarians in the United Nations have complained, almost from the beginning of the conflict in Tigray seven months ago, of limited access to civilians, assets damaged or confiscated and even the looting and burning of harvests.