WORLD Hundreds evacuated, some by chopper, from New Zealand floods

Hundreds evacuated, some by chopper, from New Zealand floods

Several hundred people in New Zealand were evacuated from their homes Monday with some recounting dramatic helicopter rescues as heavy rain caused widespread flooding in the Canterbury region. 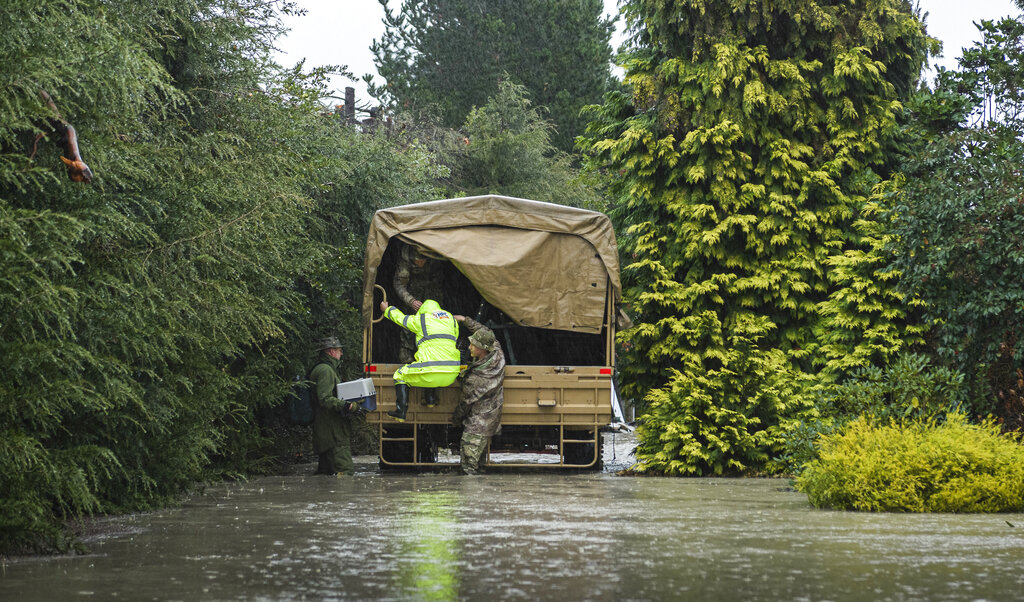 New Zealand Defense Force personnel assist a family with their evacuation near Ashburton in New Zealand's South Island, Sunday May 30, 2021. Several hundred people in New Zealand were evacuated from their homes Monday, May 31, 2021. (Photo: AP)

Authorities declared a state of emergency after some places received as much as 40 centimeters (16 inches) of rain over the weekend and into Monday. Forecasters warned of possible heavy rain through Monday evening before conditions improved.

The military helped evacuate more than 50 people including several overnight in an NH-90 military helicopter.

One man was clinging to a tree near the town of Darfield when he jumped into floodwaters and tried to swim to safety but was swept away, the military said.

Helicopter crews scoured the water for 30 minutes before finding the man and plucking him to safety. The military helicopter also rescued an elderly couple from the roof of their car.

“Seeing the community overnight pull together and support the displaced residents who were evacuated from their homes has been heartening," said Army Liaison Officer Cpt. Jake Faber.

Another man was rescued by a civilian helicopter pilot Sunday after he was swept from his farm as he tried to move his stock to safety.

Paul Adams told news organization Stuff he thinks he got hit by a wall of water he didn't see coming. He was swept down the raging Ashburton River before managing to drag himself onto a fence and then into a tree. Another farmer spotted his headlamp and organized a rescue mission.

“The rescuers are fantastic," Adams told Stuff, adding that he was now back on his farm and “good as gold." He said that so far he'd only found about 100 of his herd of 250 animals alive.

Australian Prime Minister Scott Morrison, who was visiting New Zealand, told reporters that he was thinking of those caught up in the floods.

“Australia is no stranger to floods,” Morrison said. “Or fires, or cyclones, or, indeed, even mouse plagues. We have, both countries, endured a large amount of challenge over the course, particularly, of these last few years."

New Zealand Prime Minister Jacinda Ardern planned to travel to Christchurch later Monday to be briefed on the situation firsthand.