Hundreds of Greek firefighters fought desperately Sunday to control wildfires on the island of Evia that have charred vast areas of pine forest, destroyed homes and forced tourists and locals to flee. 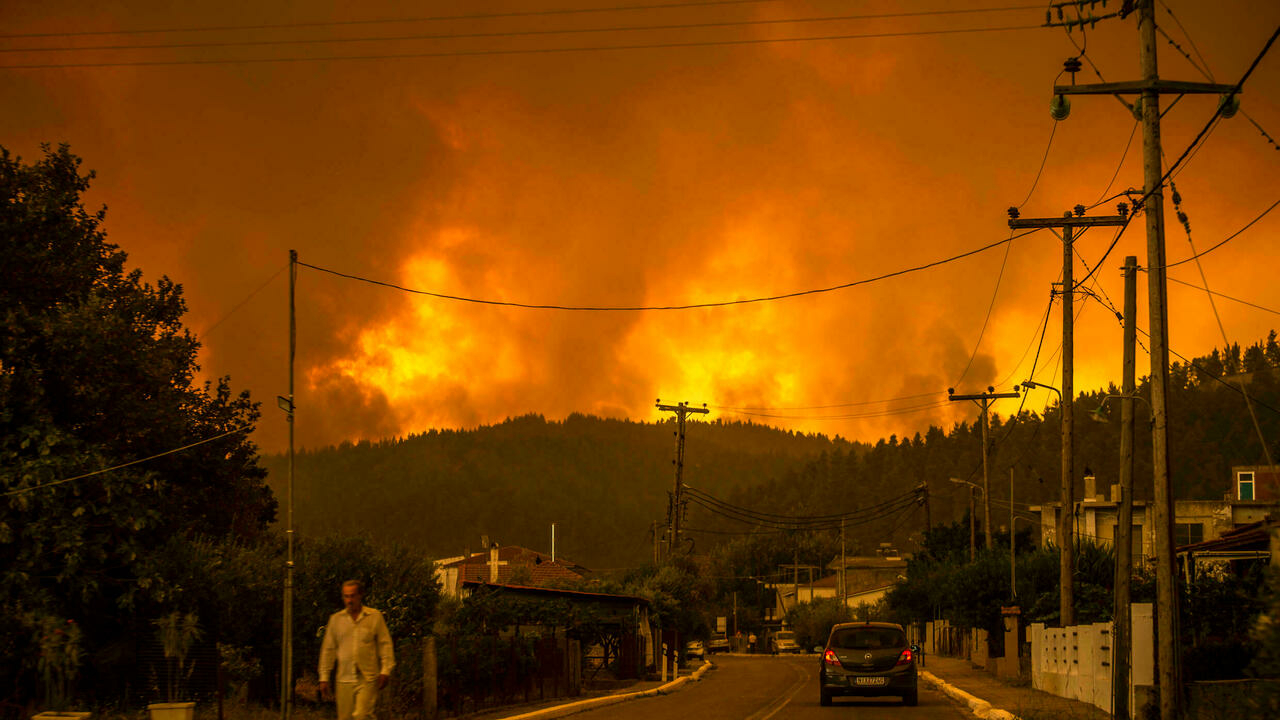 The thick pine forests on Evia which made it appealing to tourists have turned in into a nightmare for firefighters. (Photo: AFP)

Blazes also raged in the Peloponnese region in the southwest, but fires in a northern suburb of Athens have subsided.

Greece and Turkey have been battling devastating fires for nearly two weeks as the region suffers its worst heatwave in decades. Officials and experts have linked such intense weather events to climate change.

So far, they have killed two people in Greece and eight in neighbouring Turkey, with dozens more hospitalised.

But while rains brought some respite from the blazes in Turkey over the weekend, Greece continued to suffer amid soaring temperatures.

The rugged landscape and thick pine forests on Evia which made it appealing to tourists have turned in into a nightmare for firefighters.

The inferno on the Greece's second largest island, which lies east of the capital, has turned thousands of hectares into ashes and destroyed homes.

Thousands have been evacuated, and hundreds of locals and tourists have fled on ferry boats.

Some 260 Greek firefighters with 66 vehicles were battling the blazes on Evia, helped by 200 more from Ukraine and Romania with 23 vehicles and seven aircraft.

One fire service official told the Eleftheros Typos newspaper that the heat from the fires on Evia and elsewhere was so intense that "the water from the hoses and the water-dropping aircraft was evaporating" before reaching the blazes.

Flames were devouring houses in the villages of Ellinika, Vasilika and Psaropouli.

Nine people were evacuated from a beach surrounded by flames by the coastal village of Psaropouli, the ANA news agency reported on Saturday.

Ferry boats and navy war ships were on alert off the coast to evacuate people.

Local officials were critical of the efforts to control the fires, which erupted on the island on August 3.

"With what we have seen so far the fire won't be under control any time soon. I have no more voice left to ask for more aircraft. I can't stand this situation", Giorgos Tsapourniotis, mayor of Mantoudi in Evia told Skai TV on Saturday.

He added that many villages were saved because young people stayed there despite the evacuation order and kept the fires away from their homes.

"40,000 people will be living dead in the next years because of the destruction in the area", Iraklis, a man from Istiaia town in northern Evia told Open TV on Sunday, as people's homes and livelihoods were wiped out.

Greek deputy minister for civil protection Nikos Hardalias said late Saturday that provisional shelter was provided to 2,000 people who have been evacuated.

Meanwhile, in the Peloponnese region in the southwest, fire fronts in the towns of East Mani, Ilia and in Messinia remained active with many villages and settlements evacuated.

In a northern suburb of Athens, where blazes have raged for several days, there was no longer any active front though firefighters were tackling flare-ups.

In the previous 10 days, 56,655 hectares (140,000 acres) have been burnt in Greece, according to the European Forest Fire Information System. The average number of hectares burnt over the same period between 2008 and 2020 was 1,700 hectares.

Because of this situation deemed the worst in decades, Greece requested help through the European emergency support system, and reinforcement were sent from several countries.