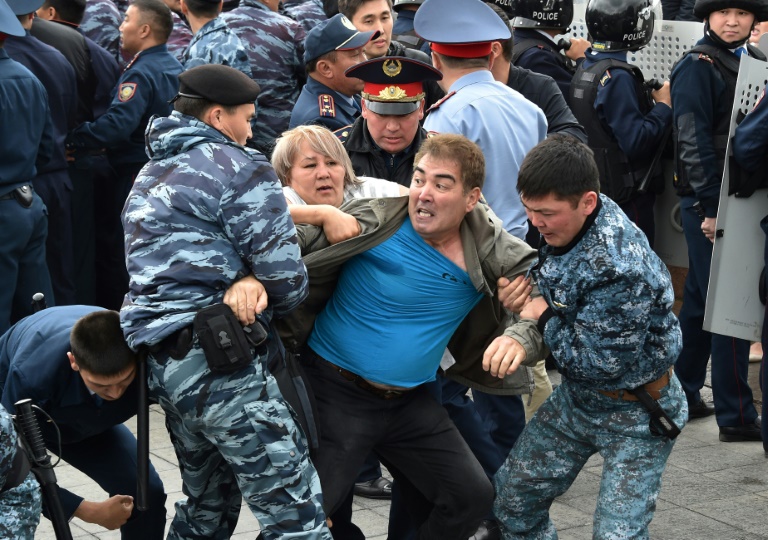 Hundreds of arrests were made in Kazakhstan's two main cities Nur-Sultan and Almaty. (Photo: AFP)

His hand-picked successor Kassym Jomart-Tokayev, 66 was a shoo-in to win the vote contested by six other candidates.

But the day was marked by the biggest protests the Central Asian country has seen in three years.

Two AFP journalists were among those detained by police in the largest city Almaty where policebroke up a protest involving several hundred people.

One AFP correspondent was taken to a police station before being released while another had video equipment confiscated by police.

In Almaty, a journalist for Radio Free Europe/Radio Liberty, Petr Trotsenko, and Marius Fossum from the Norwegian Helsinki Committee rights NGO were also detained. Both were later released by police.

In Nur-Sultan, another Radio Free Europe journalist Saniya Toiken was held by police before being released.

Nazarbayev's foreign-based political nemesis, fugitive banker Mukhtar Ablyazov had called for protests in cities across the nation on Sunday and Monday.

Career diplomat and interim president Kassym-Jomart Tokayev, 66, is running for the ruling party with backing from authoritarian Nazarbayev, who stepped down from the presidency in March.

The 78-year-old strongman's departure shocked Kazakhs who had lived under his rule since Soviet times but he is still expected to call the shots in the oil-rich Central Asian state of 18 million people.

Tokayev's rivals in the polls that opened at 0100 GMT included one low-key opposition figure, but none is widely known in Muslim-majority Kazakhstan.

By contrast Tokayev has won endorsements from pop stars and film actors, and appears to have the weight of the state machine behind him.

Both the president and his predecessor men voted early in the capital Nur-Sultan.

Tokayev told reporters Nazarbayev was "still in power in the capacity of chairman of the security council... and other capacities".

Responding to concerns about police crackdowns on protests ahead of the vote, Tokayev said that he would be "building up a dialogue with all those who support the government and those who are against the government."

Marat Sagyndykov, a 65-year-old retired civil servant said he had voted for Tokayev "in order to continue the course of the Leader of the Nation", referring to Nazarbayev's constitutionally designated status.

"I think in 30 years we have had some successes. There have been negatives, too, but they exist in all countries," Sagyndykov told AFP.

Aslan Sagutdinov, a video blogger who was detained last month for holding up a blank placard at a protest, told AFP by email that he did not intend to vote.

"If you vote in unfair elections you are allowing them to say they are fair," said Sagutdinov, who lives in the northwestern town of Uralsk.

Tokayev's campaign chief on Friday predicted victory but without the overwhelming backing enjoyed by Nazarbayev.

"I think Tokayev will receive the support of the majority of the population, but to aspire to the figures that Nursultan Nazarbayev received would be inappropriate," campaign chief Maulen Ashimbayev said, Russian news agency Interfax reported.

Four years ago Nazarbayev scored nearly 98 percent of a virtually uncontested vote where the official turnout was 95 percent.

No Kazakh vote has ever been recognised as fully democratic by the Organisation for Security and Cooperation in Europe (OSCE), which sent more than 300 observers to monitor this election.

One of Tokayev's first acts as interim president was to propose that the capital Astana -- which Nazarbayev transformed from a steppe town into a million-strong city -- be renamed "Nur-Sultan" in honour of his mentor.

The change went ahead without public consultation.

There is only one openly opposition candidate in the race, journalist Amirzhan Kosanov, who has criticised the government.

However, even his criticism has been vague, rather than directly attacking either Tokayev or Nazarbayev.

The buildup to the vote was marked by an intensifying crackdown on the opposition with courts sentencing protesters to short stays in jail and police raiding activists' homes.

Human Rights Watch called the prospect of a genuine political transition "an illusion" and noted the persistence of rights abuses under Tokayev's presidency.

"Kazakh authorities routinely break up peaceful protests, forcibly round up participants ... and sanction them with warnings, fines, and short-term imprisonment," the watchdog said.