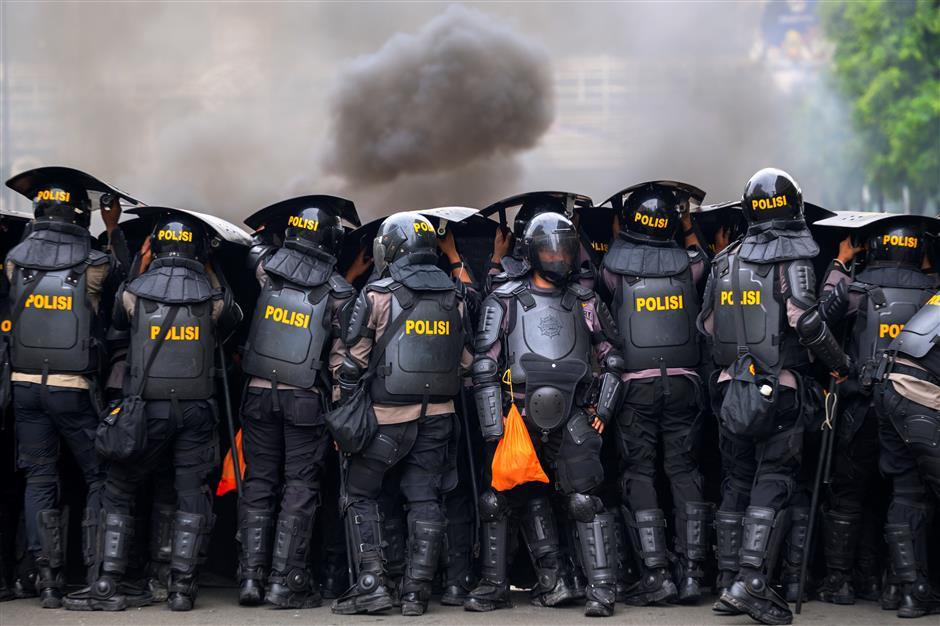 Police use their shields to cover from rocks thrown by students during clashes between activists and police on the last day of a three-day nationwide strike against a controversial new law  in Jakarta on Thursday. (Photo: AFP)

Hundreds of people were arrested in Jakarta on Thursday as tens of thousands protested across Indonesia for a third day against a controversial new law that critics say will harm labor rights and the environment.

Thousands of security personnel were deployed to block a ccess to the capital and prevent workers and students from demonstrating in front of the presidential palace and parliament.

Jakarta police spokesman Yusri Yunus said more than 400 people — mostly teenagers — had been arrested in the past two days, accusing them of provoking unrest during the protests. “We are now questioning them,” Yunus said, adding the situation across the city was “under control.”

The government hopes a new bill — which aims to cut red tape by amending dozens of existing laws covering taxation, labor and environment regulations — will attract foreign investment to the impoverished nation.

But labor activists and green groups have slammed the legislation.

Police banned yesterday’s demonstrations citing coronavirus concerns, but workers and students marched anyway in dozens of cities across the archipelago.

Violent protests occurred in several other cities this week.