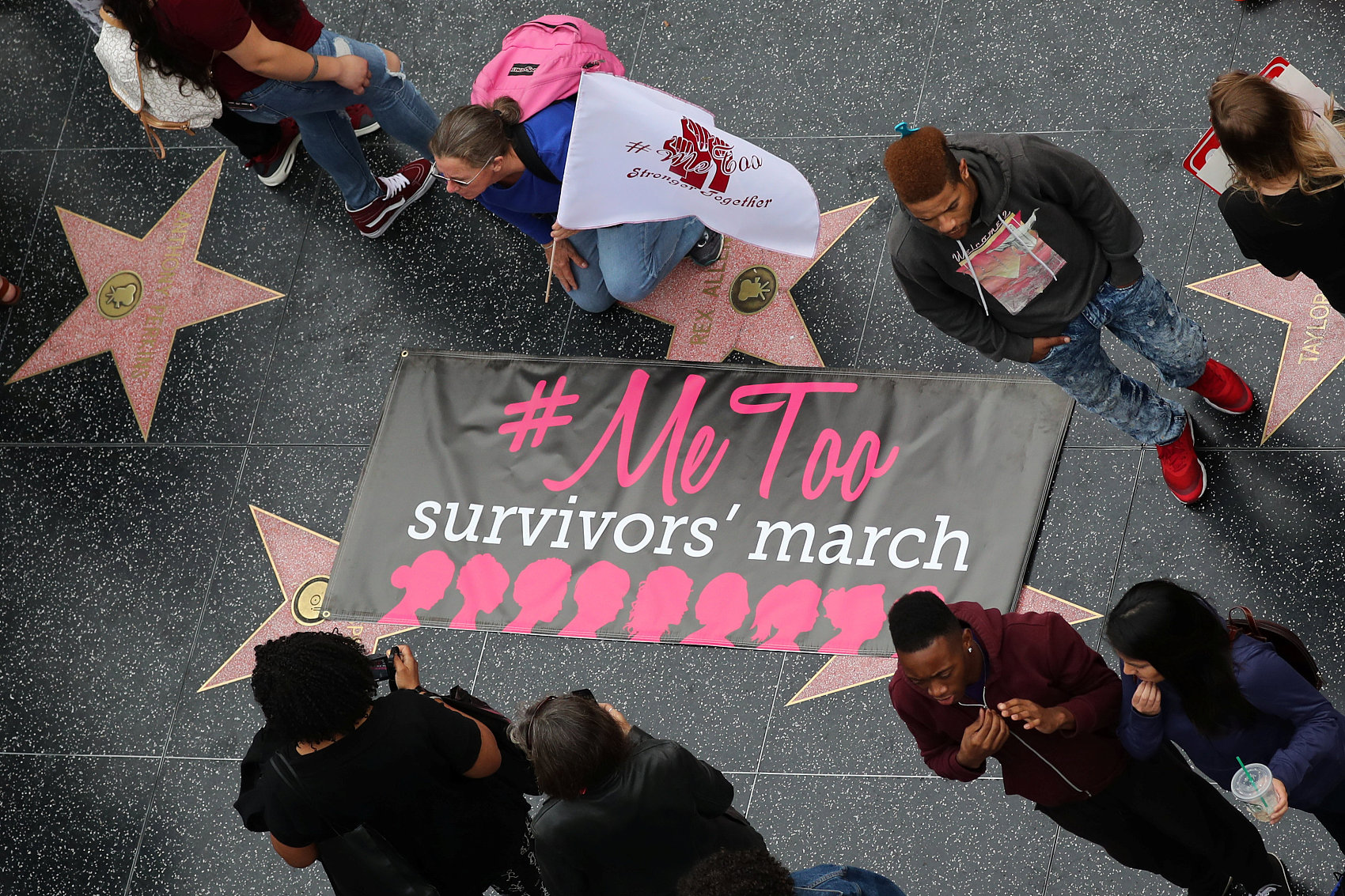 Armed with signs, catchy phrases and a motivation to take #MeToo beyond the internet and into real life, a few hundred women, men and children gathered Sunday among the sex shops and tourist traps of Hollywood Boulevard to protest sexual harassment.

The Take Back the Workplace March and the #MeToo Survivors March joined forces in the heart of Hollywood, near the entrance to the Dolby Theater where the Academy Awards take place. They walked side by side past the tourists, costume shops, strip clubs and a man wearing a "Whiskey Made Me Do It" T-shirt to gather for a rally of rousing speeches from the likes of Harvey Weinstein accuser Lauren Sivan and Oscar-winning producer Cathy Schulman.

"Not in pots, not in plants, keep your junk inside your pants," the crowd chanted for a few minutes, before shifting gears to: "Harvey Weinstein is a joke, women workers just got woke."

Other chants included, "Survivors united, we'll never be divided" and "Whatever we wear, wherever we go, 'yes' means 'yes' and 'no' means 'no.' "

Some came with their families, some came with friends and attendees ranged in age from 4 to over 68. Aislinn Russell, a 15-year-old Los Angeles high school student came with two peers and signs railing against terms like "friend zone" and "slut."

"Seeing the #metoo movement growing and seeing all these people telling their stories, I have my own stories too," Russell said. "I want to join in with that and not be silent with everything going on."

Another attendee, Nancy Allen, a 52-year-old woman from Los Angeles, carried a sign that read, "I was 7."

"We've been silent too long," Allen said. "A lot of people have kept this inside us for years and years."

Howard Kim, a 68-year-old Los Angeles resident, came out to support the march.

"I'm just a little sorry there aren't more people out here," Kim said. "I was hoping there would be."

Event organizers estimated there were about 200 to 300 attendees. But they also acknowledged that it was "difficult to tell" with the normal Hollywood Boulevard crowds.

The crowd walked about a mile to the corner of Sunset Boulevard and Cole, the site of CNN headquarters, where a podium was set up for the Take Back the Workplace rally.

Sivan, a TV journalist who alleged sexual harassment from Weinstein and served as the "celebrity chair" of the Take Back the Workplace event, said that the time is ripe for a re-ordering of power.

"We want our daughters and sons to be able to go to a workplace and never have to take a meeting with a dude in a bathrobe," Sivan said. "They will never have to choose to put out or keep their job."

Schulman, who presides over the advocacy group Women in Film, told the crowd that the sexual harassment problem can't be fixed by just weeding out sex criminals. Women, she said, have to be protected from prejudice and abuse. Schulman called for diversifying workplaces and reforming human resources departments.

Although there were not many celebrity attendees on site, some supported the marches from afar.

"To all my sisters and brothers out there marching today in L.A Sending you love and support from thousands of miles away!" said Patricia Arquette on Twitter Sunday.

Claire Forlani, another Weinstein accuser, also tweeted: "To the women and men marching in Hollywood today #metoomarch I am there in spirit. #Solidarity"

The peaceful demonstration had an air of melancholy too. While there was solidarity, fear of retaliation persisted.

One woman, who did not want to give her name for fear of retaliation or lawsuit carried a homemade sign accusing a sitcom producer of grabbing her from behind and making a lewd remark and suggestive comment.

"Thank you to my agent at William Morris for telling me 'Keep your mouth shut or you'll never work again,' " read the other side of the sign. "BTW, you also represented my abuser."

Schulman said she is hopeful, however. Her organization on Thursday announced that it is setting up a sexual harassment hotline where victims can call for pro-bono legal counseling and advice. The hotline is expected to be operational by Dec. 1.

"I've experienced gender bias, salary imparity. I've been yelled at, disrespected. I've had credit taken from me, I've had money stolen from me. I've been bankrupted twice and much worse. And I've seen it all. I've seen every bit of harassment and every bit of these sex crimes. However, I've produced 20 movies, I've supervised over 150 movies, I've won an Academy Award. I've even raised a 17-year-old daughter," Schulman said. "Do not let them destroy us. We can win this war. It's a game. It's a game of power that we can win."