German emergency responders were on Friday still searching for hundreds of missing people after the worst floods in living memory killed almost 60 in the country's west. 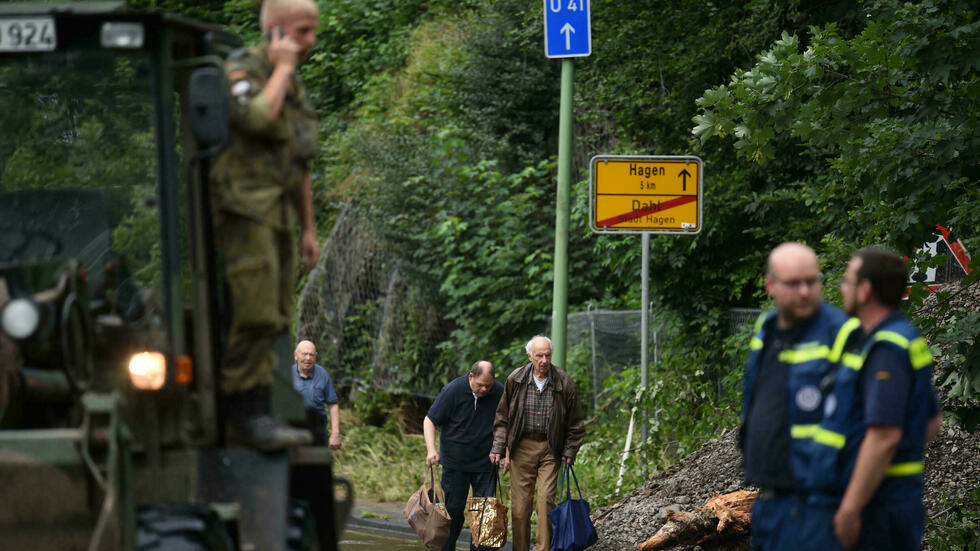 Thousands of emergency responders including soldiers were deployed in western Germany. (Photo: AFP)

"I fear that we will only see the full extent of the disaster in the coming days," Chancellor Angela Merkel said from Washington, where she met with President Joe Biden.

Catching residents of several regions unaware and leaving destruction and despair in their wake, the masses of water were dubbed the "flood of death" by top-selling daily Bild.

Neighbouring Belgium counted at least nine dead, while Luxembourg and the Netherlands were also severely affected by the torrents of water, with thousands evacuated in the city of Maastricht.

But Germany's toll was by far the highest at 59, and likely to rise with large numbers of people still missing in North Rhine-Westphalia and Rhineland-Palatinate, the hardest-hit states.

In the devastated Ahrweiler district of Rhineland-Palatinate around 1,300 people were unaccounted for, although local authorities told Bild the high number was likely down to damaged phone networks.

Regional interior minister Roger Lewentz told broadcaster SWR that "we believe there are still 40, 50 or 60 people missing, and when you haven't heard for people for such a long time... you have to fear the worst."

"The number of victims will likely keep rising in the coming days," he added.

What's more, continuing rain is forecast for parts of the west, where water levels in the Rhine river and its tributaries are rising dangerously.

Around 1,000 soldiers have been deployed to help with rescue operations and rubble-clearing in affected towns and villages.

Streets and houses under water, overturned cars and uprooted trees could be seen everywhere the floodwaters had passed, while some districts were cut off from the outside world.

In Ahrweiler several houses collapsed completely, leaving the impression the town had been struck by a tsunami.

At least 20 people had been confirmed dead in Euskirchen, one of the worst-hit towns just to the north.

Its normally spick and span centre had been turned into a heap of rubble, with house facades torn off by the rushing floods.

Adding to the town's woes, a nearby dam remains at risk of giving way.

"My empathy and my heart go out to all of those who in this catastrophe lost their loved ones, or who are still worrying about the fate of people still missing," Merkel told reporters in Washington.

She said her government would not leave those affected "alone with their suffering," adding that it was doing its "utmost to help them in their distress".

Pensioner Annemarie Mueller, 65, looking out at her flooded garden and garage from her balcony, said her town of Mayen had been completely unprepared for the destruction.

"Where did all this rain come from? It's crazy," she told AFP, recalling the floodwater crashing through her street during the night.

"It made such a loud noise and given how fast it came down, we thought it would break the door down."

Four people are still missing in Belgium and the army has been sent to four of the country's 10 provinces to help with rescue and evacuations.

With homes under water since Wednesday, people from resort town Spa were being put up in tents.

The storms have put climate change back at the centre of Germany's election campaign ahead of a September 26 parliamentary poll marking the end of Merkel's 16 years in power.

Germany "must prepare much better" in future, Interior Minister Horst Seehofer said, adding that "this extreme weather is a consequence of climate change".

Because a warmer atmosphere holds more water, climate change increases the risk and intensity of flooding from extreme rainfall.

In urban areas with poor drainage and buildings located in flood zones, the damage can be severe.

Political candidates were quick to open a bidding war on climate following the floods.