Hundreds of Brexit Party candidates will run in UK election 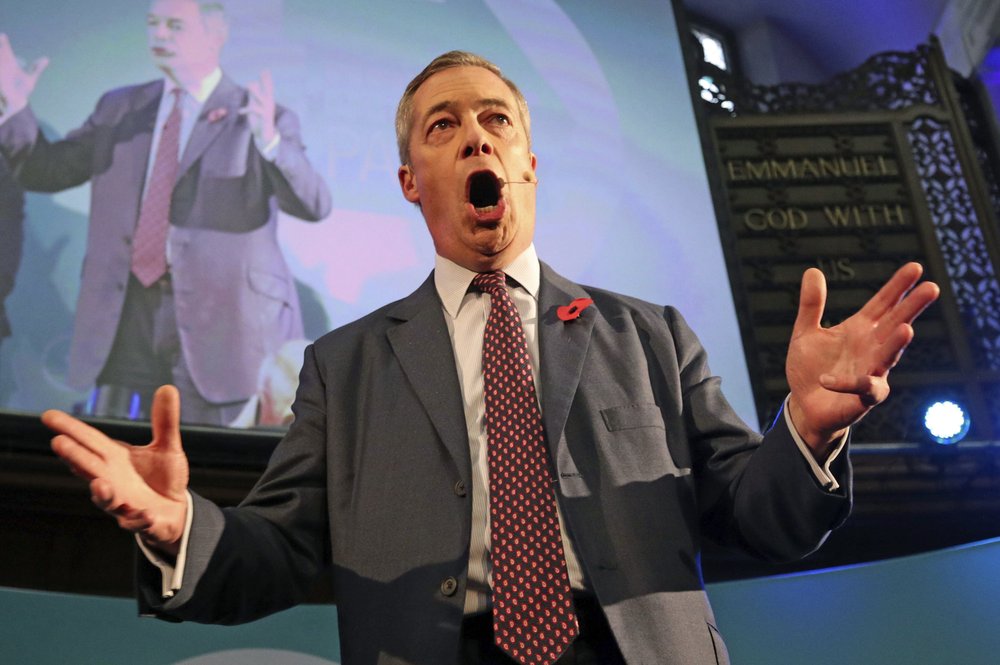 Nigel Farage unveiled hundreds of Brexit Party candidates for Britain’s general election on Monday, and warned the governing Conservatives that the UK will never leave the European Union without his party’s backing.

All seats in the 650-seat House of Commons are up for grabs in the Dec. 12 election. Farage says his party will run in almost every constituency unless Prime Minister Boris Johnson scraps his EU divorce deal.

Johnson hopes to win a Conservative majority so that he can break the country’s Brexit deadlock and get his EU divorce deal through Parliament.

Farage, who has run for Parliament seven times without success, says he won’t be a candidate himself.

Farage’s party, which was founded earlier this year, rejects Johnson’s Brexit deal, preferring to leave the bloc with no agreement on future relations in what it calls a “clean-break” Brexit.

The party says leaving with a deal, as Johnson wants, would mean continuing to follow some EU rules and holding years of negotiations on future relations.

Farage told a crowd of supporters at a rally in London that Johnson’s deal “is not Brexit. It is a sell-out.”

Farage called the Conservatives are arrogant for not joining him in a “leave alliance.”

“There will be no Brexit without the Brexit Party,” he said. “Of that I am certain.”

U.S. President Donald Trump, a friend of Farage, also urged the two politicians to form an electoral pact, saying last week that Farage and Johnson together would be “an unstoppable force.”

But Johnson has ruled out doing a deal with Farage. And Brexit-supporting Conservatives have criticized Farage, saying he could split the pro-Brexit vote and allow the left-of-center opposition Labour Party win power.

Conservative lawmaker Jacob Rees-Mogg said that “it would be a great shame if he carries on fighting after he has already won to snatch defeat from the jaws of victory.

“I understand why Nigel Farage would want to carry on campaigning because he has been campaigning for the best part of 30 years and it must be hard to retire from the field. But that is what he ought to do,” Rees-Mogg told LBC radio.

The Labour Party is trying to shift the campaign’s focus from Brexit to domestic political issues such as schools, health care and Britain’s social inequities.

The centrist Liberal Democrats, who want to cancel Brexit, are wooing pro-EU supporters from both the Conservatives and Labour in Britain’s big cities and liberal university towns.

Liberal Democrat leader Jo Swinson demanded to know Monday why she wasn’t invited to take part alongside Johnson and Corbyn in the only televised debate of the campaign announced so far.

She said leaving her out of the Nov. 19 debate on broadcaster ITV would exclude “the voice of the millions of people who voted to remain, who want to stop Brexit.”

“It looks like they are sexist, or they are scared, or possibly both,” she said.