Hundreds of Portuguese demonstrate in Lisbon for Amazon rainforest protection 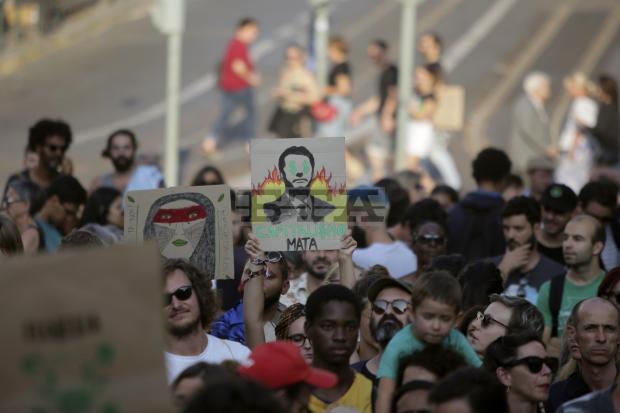 A protestor holds up a poster with a picture of Brazilian President Jair Bolsonaro and the words "Capitalism Kills" during a demonstration calling for action to protect the Amazon rainforest Monday, Aug. 26, 2019, in Lisbon. (Photo: AP)

LISBON, Aug. 26 (Xinhua) -- About 700 people demonstrated on Monday in Lisbon for the protection of the Amazon rainforest, Portuguese Lusa News Agency reported.

"At the peak of the demonstration we estimated that there were around 700 people. It was an orderly demonstration," said Public Security Police (PSP) officer Carlos Mena, quoted by Lusa.

The demonstration organized by various movements took place as forest fires in the Amazon are raging, causing great international concern.

Data from Brazil's National Institute for Space Research (Inpe) showed that the number of forest fires in Brazil soared by 82 percent from January to August this year from a year ago, and over half of those fires occurred in the Amazon rainforest.