Hundreds of protesters rallied outside Australia's Parliament House on Monday, saying they wanted to highlight the uncertain futures of many refugees since the government replaced permanent protection visas with temporary visas. 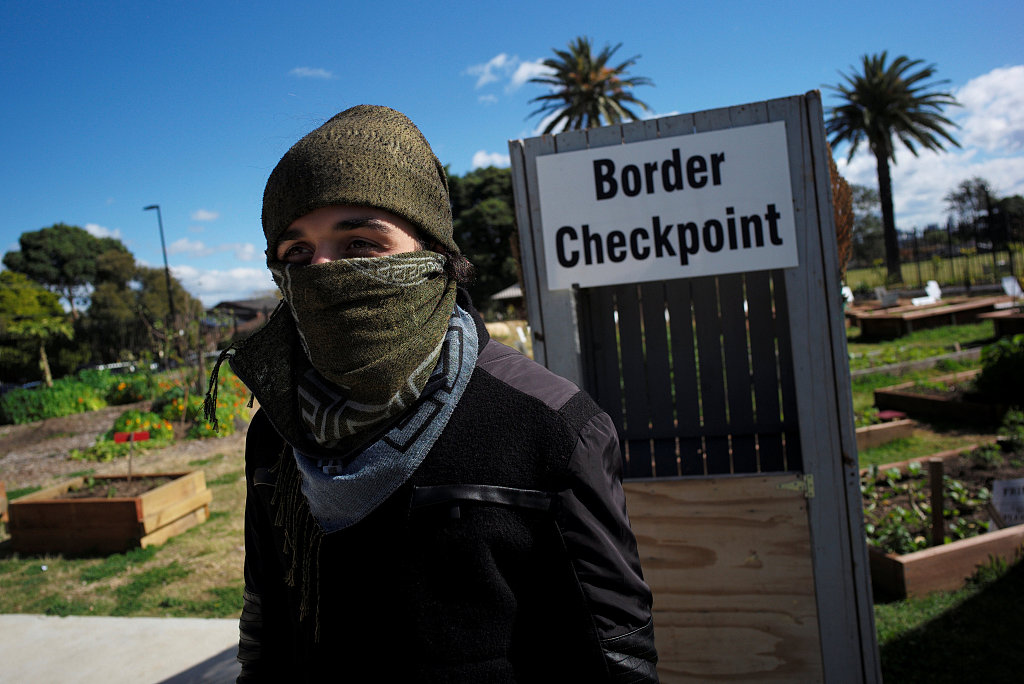 Ashour Namato, 24, a former refugee who fled Syria, plays the role of a refugee camp guard at the gates of the "Refugee Camp in my Neighbourhood" installation at a Sydney park in Australia August 7, 2017. (File photo: VCG)

The protesters were from Iraq, Iran, Sri Lanka, Sudan, Somalia and included Rohingya Muslims from Myanmar. Most were in Australia on three-year visas or five-year visas that are available to refugees who agree to live outside the major cities.

Such refugees lose their visas if they to return to their homelands to visit family.

"The circumstances of the temporary visas are onerous as well as a bureaucratic nightmare," Refugee Action Coalition spokesman Ian Rintoul said. "People are effectively in limbo in that are indefinitely separated from partners and from children as well as brothers and sisters."

The temporary visas were introduced when the conservative government was first elected in 2013 as a way of deterring asylum seekers who come to Australia by boat. Refugees who do not arrive by boat are entitled to permanent protection visas.

Some asylum seekers who arrived by boat as far back as 2012 were only allowed to apply for refugee visas last year, Rintoul said.

When visas expired, some were not renewed in cases where the government decided that conditions the refugees had fled in their homelands had improved. Refugees who were refused visa extensions included Sri Lankans and some Iraqis, Rintoul said.

Chanting "eight years is too long" and "justice for refugees," most of the 1,000 protesters had driven 650 kilometers (400 miles) from the city of Melbourne to demonstrate, Rintoul said.

They carried a fake coffin draped in an Australian flag that they said represented human rights in Australia.

Heydar Aftahi, an Iranian Kurd, said he arrived in Australia by boat in 2010 and had his permanent residency visa cancelled in May. He faces deportation despite having an Australian citizen wife and a 4-year-old Australian son.

The 36-year-old Sydney interpreter said he was fighting for a visa in the Federal Court, but the government had refused him a bridging visa while his case was heard because he arrived by boat.

"I have no visa at all, having an Australian wife and an Australian son and I have to shut down my business as well," Aftahi said outside Parliament House.

"It's discrimination just because I came by boat. They prevent me from applying for any other visa," he added.

Prime Minister Scott Morrison declined to meet a delegation of protesters led by Iraqi Council Melbourne president Samir Kafaji in Parliament House. But two lawmakers from the opposition Labor Party, which opposes temporary visas, agreed to speak to the delegates.

The government toughened its policy against boat arrivals in 2013, banning any asylum seekers who attempt to reach Australia by water from ever settling there.

The boats have since all but stopped, after arriving at a rate of more than one a day.

Those arriving by boat since 2013 have been banished to immigration camps in the poor Pacific island nations of Papua New Guinea and Nauru, where hundreds still languish.

The United States agreed to resettle up to 1,250 of these refugees. The Australian government said last week that 585 refugees had since found new homes in the United States under the agreement.