Hundreds protest against US virus rules 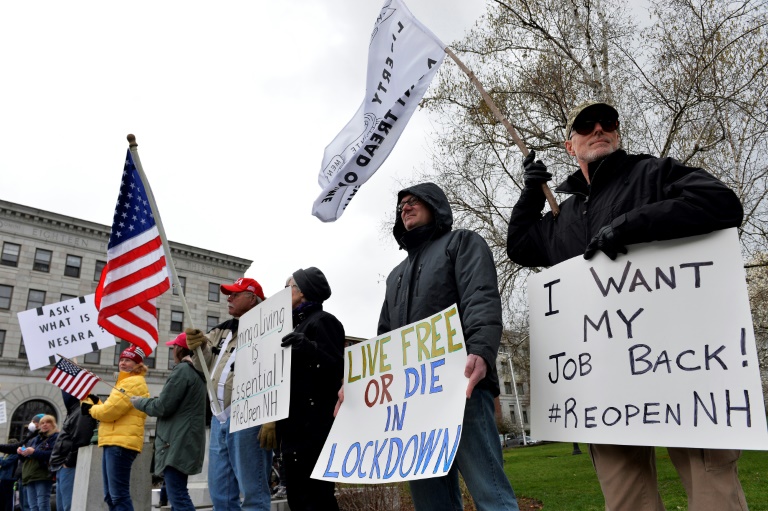 Hundreds of New Hampshire residents rallied outside the statehouse in Concord on April 18 to urge a quick end to the northeastern state's virus-related stay-at-home rule. (Photo: AFP)

Hundreds protested Saturday in cities across America against coronavirus-related lockdowns -- with encouragement from President Donald Trump -- as resentment grows against the crippling economic cost of confinement.

An estimated 400 people gathered under cold rain in Concord, New Hampshire -- many on foot while others remained in their cars -- to send a message that extended quarantines were not necessary in a state with relatively few confirmed cases of COVID-19.

In Texas, more than 250 people rallied outside the State Capitol in Austin, including far-right conspiracy theorist Alex Jones, founder of the Infowars site, who rolled up in a tank-like truck.

"It's time to reopen Texas, it's time to let people work, it's time for them to let voluntary interaction and good sense rule the day, not government force," said Justin Greiss, an activist with Young Americans for Liberty.

Stay-at-home mother Amira Abuzeid added: "I'm not a doctor but I'm an intelligent person who can do the math and it looks like at the end of the day, these numbers are not that worrisome."

Demonstrators outside Maryland's colonial-era statehouse in Annapolis stayed in their cars but waved signs with messages like "Poverty kills too."

Dolores, a hairdresser, told AFP she is not eligible for unemployment because she is a business owner, not an employee.

"I need to save my business. I need to work to live. Otherwise, I will die," she said.

Other demonstrations took place across the country in cities such as Columbus, Ohio and San Diego, California, as well as the states of Indiana, Nevada, and Wisconsin.

Few practiced social distancing but many of the protesters waved American flags.

Protesters have drawn encouragement in certain Democratic-led states from tweets by Trump, who has said he favors a quick return to normal, though protests have also taken place in Republican-led states like New Hampshire and Texas.

The US has seen more coronavirus cases and deaths than any other country in the world -- with more than 734,000 confirmed infections and 38,800 fatalities as of Saturday evening.

The vast majority of Americans are under lockdown orders restricting public movement and keeping all but essential businesses closed.

In Concord, demonstrators carried signs with slogans like "The numbers lie" and "Reopen New Hampshire."

Their common demand was that the stay-at-home order for the state of 1.3 million people be called off before its scheduled May 4 end date.

Others, amid a sea of American flags, chanted the state's Revolutionary War-era slogan, "Live Free or Die."

"People are very happy on a voluntary basis to do what's necessary," one demonstrator, 63-year-old Skip Murphy, told AFP by phone.

He added, however, that "the data does not support the egregious lockdown we are having in New Hampshire."

As of early Friday, New Hampshire had reported 1,287 confirmed coronavirus cases and 37 deaths.

"All over the country, a lot of people are saying, 'We will do our part, but at the same time, this is supposed to be a free country,'" Murphy said.

"When that gets transgressed, people start to say, 'Wait a minute, this is wrong.'"

Most Americans -- by a two-to-one margin -- actually worry about virus restrictions being lifted too soon, not too late, a recent Pew survey found.

But demonstrators found encouragement Friday from the president, who in a series of tweets called to "LIBERATE" Michigan, Minnesota, and Virginia -- all states with Democratic governors -- from stay-at-home orders.

Trump has repeatedly called for the earliest possible return to normality as virus-related closings have had a crushing impact on American workers and businesses.

"I really think some of the governors have gotten carried away," Trump said at a White House news conference on Saturday.

He welcomed the reopening of some businesses in Texas and Vermont on Monday "while still requiring appropriate social distancing precautions."

The largest protest against stay-at-home rules so far took place Wednesday in the Michigan capital of Lansing, which drew some 3,000 people.

Murphy said he had voted for Trump, but insisted his motives were not partisan. New Hampshire Governor Chris Sununu is a Republican, he noted.

"This has nothing to do with Trump or the Democratic and Republican governors," Murphy said.

"It is a case of one size not fitting all -- the lockdown should cease where it does not make sense."