Hundreds of people protested in Madrid on Sunday against partial lockdown measures imposed on parts of the region, mainly in densely populated low-income neighbourhoods, to curb a surge in coronavirus cases. 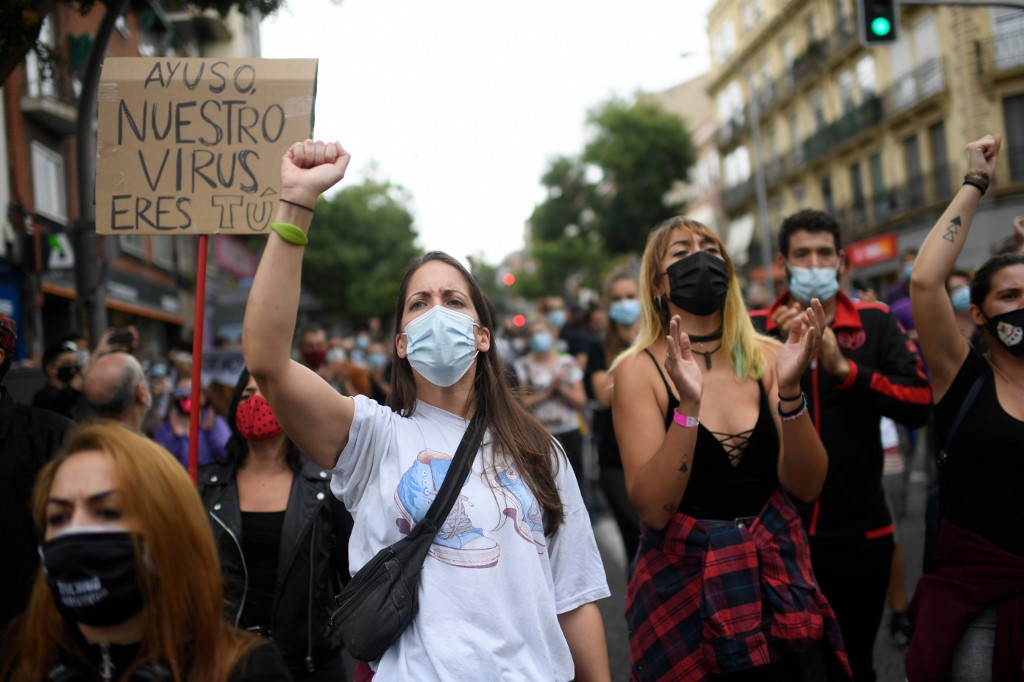 People attend a demonstration at the Vallecas neighborhood in Madrid, on September 20, 2020, to protest against the new restrictive measures announced by regional authorities. (Photo: AFP)

Since September 21 some 850,000 people have been confined to their neighbourhoods and unable to leave except for work, school or medical reasons although they are able to move freely within their own areas.

Parks in the affected areas are closed and restaurants and other businesses must shut at 10 pm.

From Monday another 167,000 people in the region of some 6.6 million people will be confined to their neighbourhoods.

"It's not confinement, it's segregation!" the crowd chanted outside of the parliament of the regional government of Madrid in the southern district of Vallecas, one of the mainly southern neighbourhoods affected by the partial lockdown measures which came into effect last week.

Protesters called for the resignation of conservative Madrid regional leader Isabel Diaz Ayuso, who drew criticism for saying that the "lifestyle" of people in the affected areas was partly to blame for the rise in Covid-19 cases.

"They don't confine the rich," was among one of the signs on display at the protest which drew groups young people, retired couples and young parents pushing baby strollers.

The Madrid measures fall short of a demand by Spain's leftist central government, which has urged the region to impose city-wide restrictions, a view shared by many of the protesters.

"It makes no sense that you can go to work in a wealthier area but can't go have a drink. Infections are rising everywhere, the rules should be the same for everyone," Marcos Ruiz Guijarro, a 27-year-old electrician who went to the rally with a group of friends, told AFP.

Many demonstrators complained that the regional government was failing to improve public healthcare or doing anything to address the problem of an overcrowded transport system where they said the virus could easily spread.

Madrid and the surrounded region is at the epicentre of a second wave of coronavirus that is sweeping Spain. The virus has claimed over 31,000 lives and infected over 700,000 in Spain, the highest infection rate in the European Union.