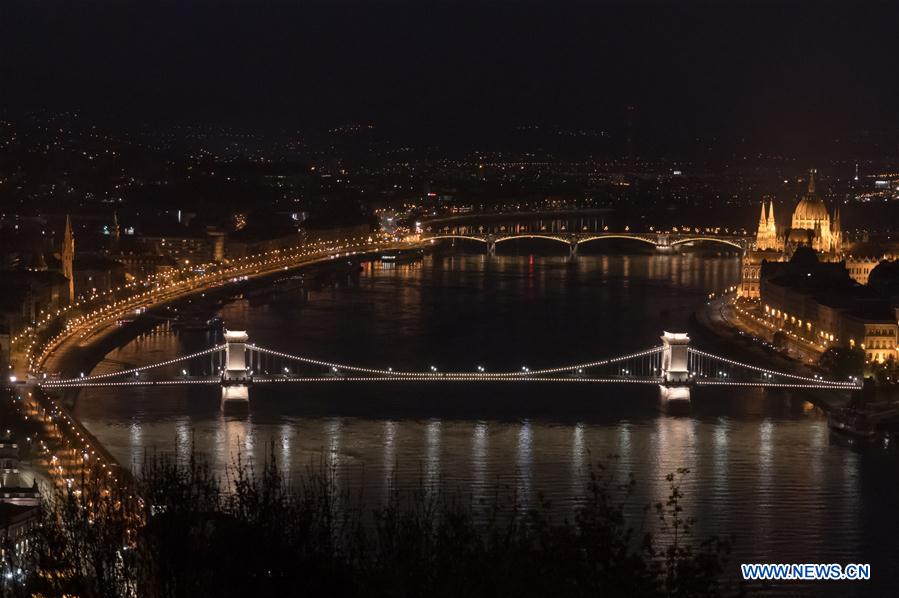 Chain Bridge is illuminated with white light as a show of appreciation for healthcare workers' efforts to combat the COVID-19 pandemic in Budapest, Hungary, April 6, 2020. (Photo: Xinhua)

BUDAPEST, April 9 (Xinhua) -- The Hungarian government will indefinitely extend the lockdown imposed nearly two weeks ago due to the coronavirus epidemic, Prime Minister Viktor Orban announced on his Facebook page on Thursday.

Orban said that the government would review the situation on a weekly basis.

"The government has also decided to grant a special power to the mayors, so that they can create and implement additional special, stricter rules for their own settlement until midnight next Monday," Orban told.

The Monday midnight deadline marks the end of Easter, which is one of the most important holidays in Hungary, a time of large family gatherings.

Before the extension of the lockdown, the mayors were heard, the opinion of the police was sought, and the government spoke to epidemiologists and scientists, according to Orban.

"There was a consensus that the previous restrictions made sense, and were quite successful in slowing down the spread of the epidemic," Orban said.

He called on people to abide by restrictive rules, avoid group gatherings, keep their distance in public places, and pay more attention to the elderly.

"Let's accept that this Easter will be different," Orban concluded.

Hungary introduced stay-at-home orders on March 27 and the order is to expire on April 11.

According to official figures, the number of confirmed coronavirus cases in Hungary stood at 980 on Thursday, with 96 recoveries and 66 fatalities.