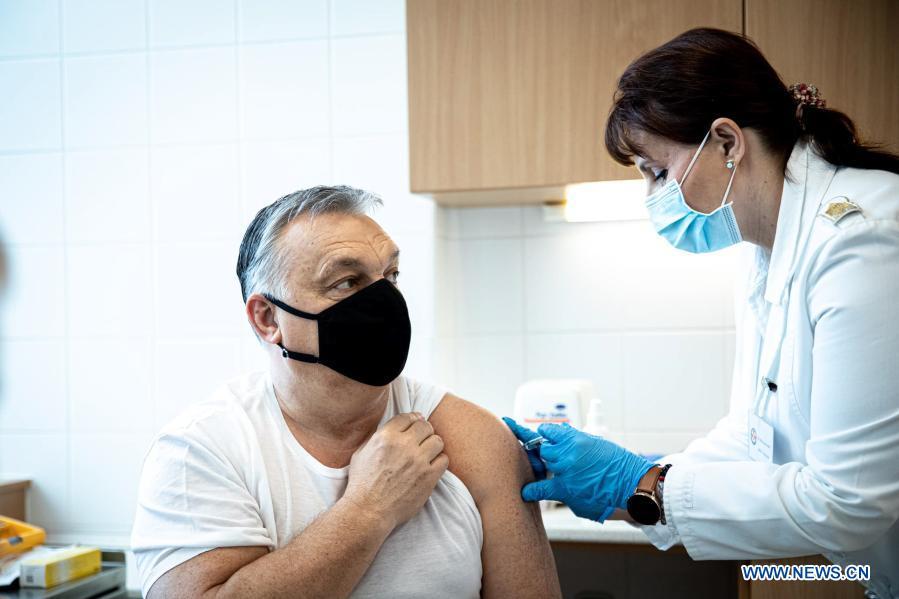 This photo from Facebook page of Hungarian Prime Minister Viktor Orban shows him receiving a dose of China's Sinopharm vaccine against COVID-19 in Budapest, Hungary, on Feb. 28, 2021. The Hungarian government is boosting its vaccination program with Russian and Chinese vaccines, as the third wave of the pandemic has brought daily infections and deaths in the country to the level of mid-December last year. (Viktor Orban Facebook via Xinhua)

"Vaccinated!" Orban wrote on Facebook, posting a photo of himself getting the shot, a close-up of the Chinese vaccine and a picture of a door to the vaccination point where he received the inoculation.

Hungarian Chief Medical Officer Cecilia Muller told a press conference Saturday that it is very important for high-ranking Hungarian officials to get immunized publicly, in order to set an example for the population.

With access to vaccines from five producers, namely China's Sinopharm, Pfizer, Moderna, AstraZeneca and Russia's Sputnik V, Hungary, the first European Union member state to buy and authorize the use of Chinese vaccines, started to administer the Sinopharm vaccine on Wednesday.

The Hungarian government is boosting its vaccination program with Russian and Chinese vaccines, as the third wave of the pandemic has brought daily infections and deaths in the country to the level of mid-December last year.

So far, 321,128 people have recovered. Currently, 5,482 patients are being treated in hospitals, including 524 on ventilators, figures from the government's coronavirus information website showed.

As of Sunday, 677,682 people have received at least one vaccine jab, while 249,499 have received two jabs, according to the website.

Hungary intends to inoculate all the 2.6 million people registered for the vaccine by Easter, and Orban aims to vaccinate a further million by May.

After the arrival of the first batch of Chinese vaccines on Feb. 16, Minister of Foreign Affairs and Trade Peter Szijjarto said Friday that another batch would arrive in Hungary in March.