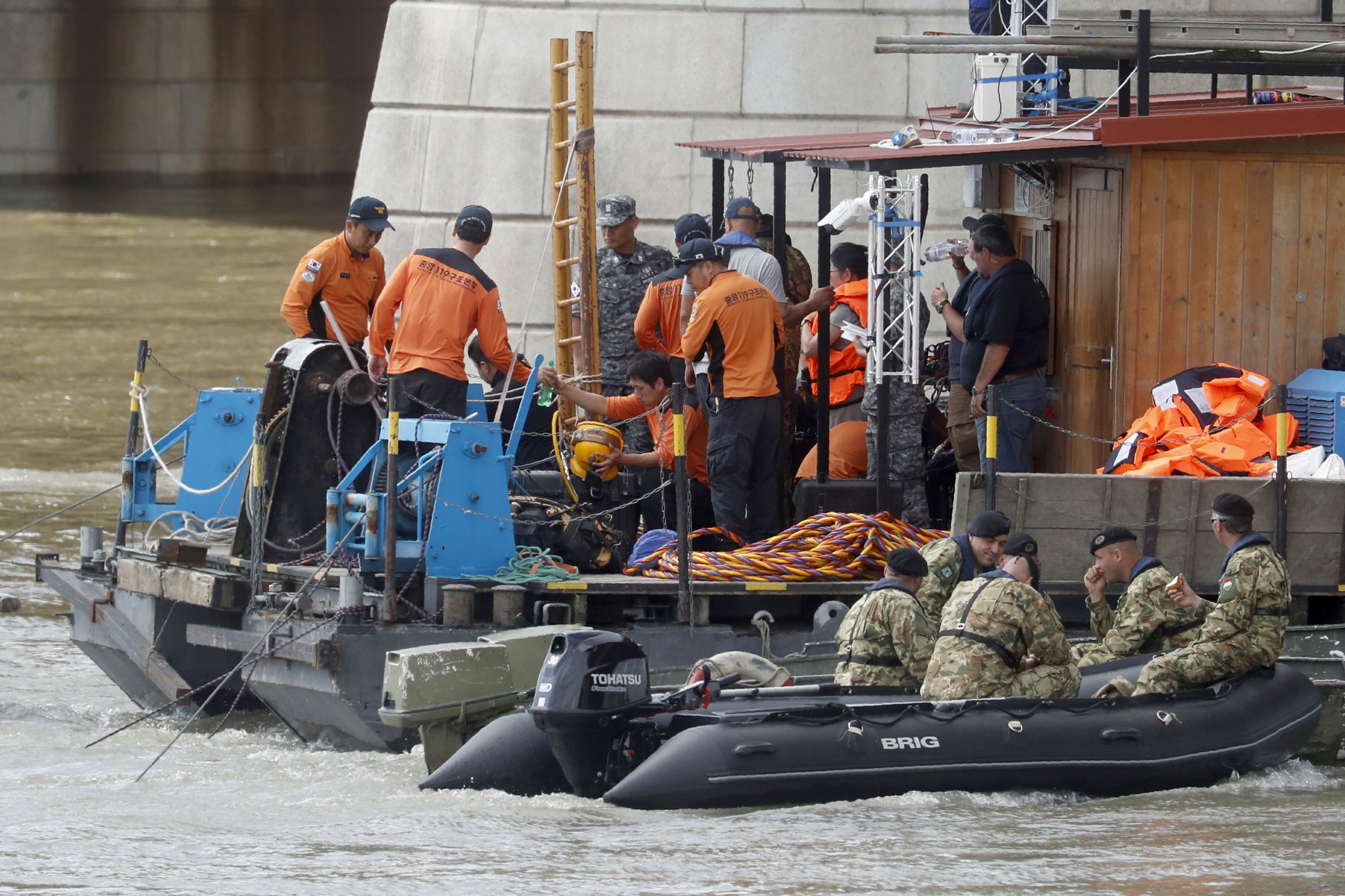 South Korean divers prepare to submerge into the Danube River under the Margaret Bridge during a search operation where a sightseeing boat capsized in Budapest, Hungary, Monday, June 3, 2019.  (AP Photo/Laszlo Balogh)

BUDAPEST, Hungary (AP) — Divers recovered the bodies Monday of two more victims who were on a tour boat that capsized and sank in the Danube River after a collision with a river cruise ship, Hungarian officials said.

The grim work brought the accident’s death toll to nine, while 19 of the 35 people who were on the sightseeing boat remain missing.

The Hableany (Mermaid) carried 33 South Korean passengers and two crew members when it was struck by the larger cruise ship, near the Hungarian Parliament building in Budapest.

Seven people were confirmed dead hours after the Wednesday sinking, leaving the seven who were rescued as the only confirmed survivors so far.

The agency leading salvage operations said divers found the eighth body in the water Monday morning during an inspection of the wreck. Korean divers assisting in the search brought to the surface in the afternoon.

Police said a ninth body, belonging to a male, was located Monday night downstream at the village of Harta, 110 kilometers (68 miles) by road from Budapest. The victim’s nationality was not revealed.

Relatives of some of the missing South Korean tourists briefly watched the search and salvage maneuvers from the Margit Bridge, above the accident site in downtown Budapest.

Janos Hajdu, the head of the government agency coordinating search and rescue efforts, said Hungarian and South Koreans divers were working together to locate any bodies possible trapped in the wreckage.

Despite a few test dives last week, the Danube’s fast flow, its high springtime water levels and near zero visibility under water have prevented divers from reaching the sunken boat.

“We will do everything except for one thing - entering the boat’s wreckage is strictly forbidden,” Hajdu said. “It is an absolutely life-threatening maneuver but on this we agree with our partners.”

A huge floating crane that can lift 200 tons is expected to be at the scene within days. Hungarian state television reported the crane was stranded roughly 120 kilometers (74.5 miles) upriver, unable to pass under bridges on the way to Budapest because of the Danube’s high water levels.

Shun-keun Song, military attache at the South Korean Embassy in Budapest, said relatives of the victims were anxious for news.

“If conditions improve ... the Korean divers would like to examine the hull of the boat,” he said. “The relatives in Korea are waiting very much for the missing family members to finally appear.”

Zoltan Tolnay, captain of a sightseeing boat in Budapest, said he was about a mile south from the site of the collision when it happened.

“What we saw was a boat sinking in complete silence into a grave beneath the waves.”