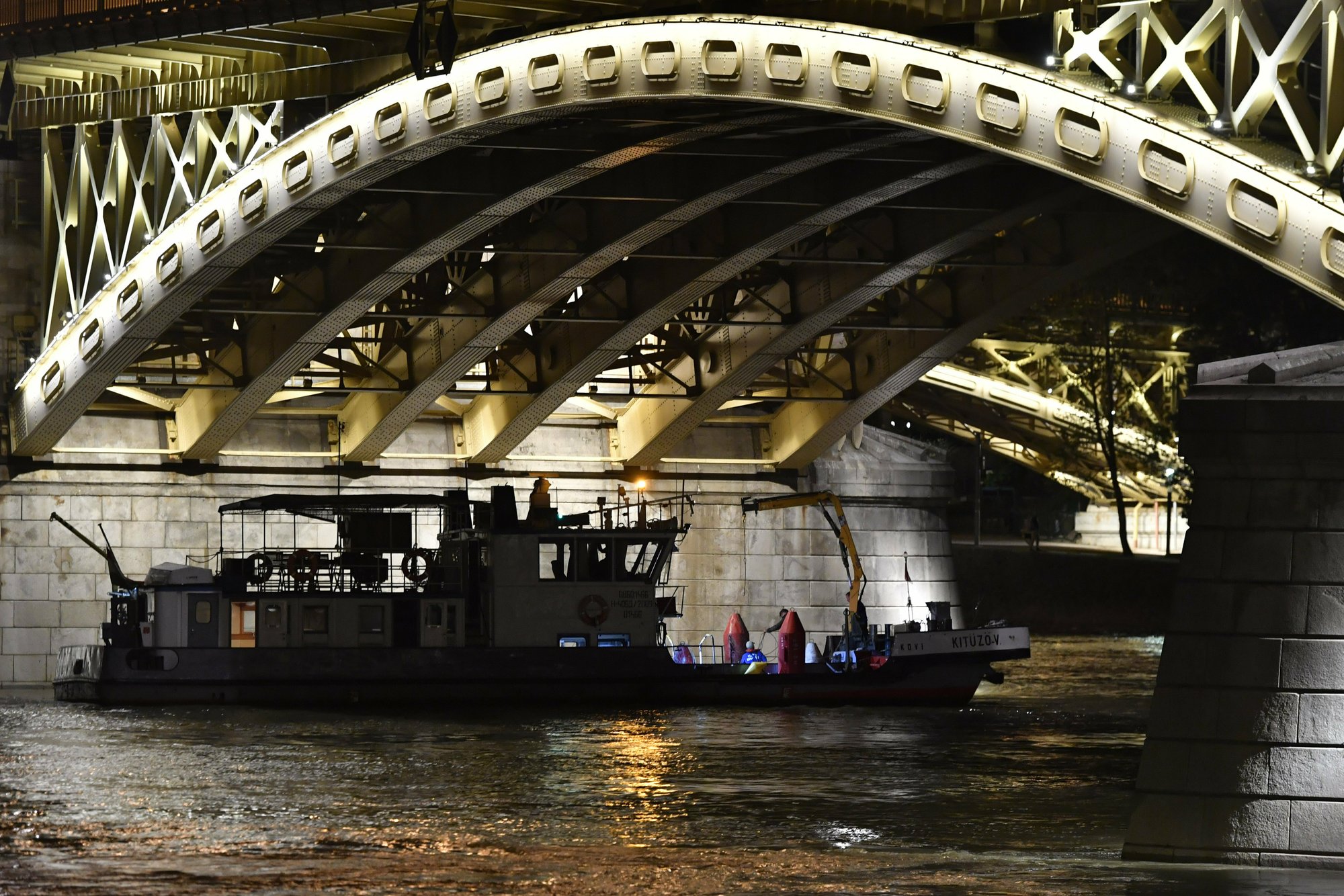 A boat taking part in the rescue operations is anchored under Margaret Bridge in Budapest, Hungary, June 5, 2019. (Photo: AP)

The death toll from last week’s Danube River crash between a sightseeing boat and a cruise ship has risen by four to 19, Hungarian police said Thursday.

Police said the body of a female South Korean tourist was found in Budapest, while the remains of one of the two Hungarian crewmen was found at the town of Erd, 21 kilometers (13 miles) downstream from the scene of the crash at Margit Bridge, near the Hungarian Parliament building.

Earlier, police announced the recovery in Budapest of the bodies of two South Korean men. One was found about 2 miles from the Margit Bridge while the other was located some 3.5 miles downstream.

Eight South Koreans and the other crew member are still missing, while only seven tourists aboard the Hableany (Mermaid) are known to have survived when it sank within seconds of being hit by the Viking Sigyn, a 95-cabin river cruise ship.

On Thursday afternoon, the Budapest’s Chief Prosecution Office said that the cruise ship’s Ukrainian captain, identified earlier as Yuriy C., referencing his first name and the initial letter of his last name, was also involved in a crash in the Netherlands on April 1 involving a sister ship.

Viking River Cruises, the owners of the cruise ships, confirmed in a statement to The Associated Press that the 64-year-old was on the Viking Idun when it collided with a tanker on the Western Scheldt waterway near the southern Dutch town of Terneuzen, but that he was “not serving” as captain at the time.

“We are unable to comment further while the investigations of both incidents are ongoing,” the company said.

The Ukrainian captain was formally arrested for 30 days in Budapest on Saturday, suspected of endangering water transport leading to a deadly mass accident. He remains in custody while an appeals court rules on prosecutors’ objections to his release on bail of 15 million forints ($52,770).

Prosecutors also said the captain erased data from his mobile phone after the Budapest collision, though they could not confirm that the missing information was related to their investigation.

A huge floating crane to be used to raise the Hableany from the Danube floor, the Adam Clark, has been waiting since Wednesday afternoon in north Budapest.

Nandor Jasenszky, a spokesman for the rescue team, said divers were setting up harnesses and lifting points on the sunken tour boat, with preparations expected to be concluded by Friday. The crane will only be able to begin the lift when Danube water levels fall.

After falling significantly in the first days of the week, the Danube has risen several inches over the past 24 hours and is expected to rise a bit more until around midday Friday — due to melting snow in its upper basin — before falling again.

The identification of the South Korean victims was being conducted with the cooperation of South Korean police. Its chief superintendent, Im Byung-ho, said new techniques have made it possible to lift fingerprints off bodies that have been in the water even as long as three months.