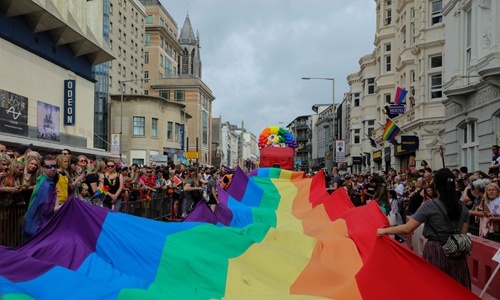 Thousands of people parade in the streets during the Pride event 2019 in Brighton, United Kingdom, on July 3. The event celebrates lesbian, gay, bisexual, transgender and queer (LGBTQ) achievements and rights. Brighton's Pride is considered the most popular Pride event in the UK. (Photo: IC)

Controversy over a new Hungarian law banning LGBTQ references in school materials is threatening to overshadow an EU summit on Thursday and Friday intended to focus on foreign policy issues: confronting Russia and tricky ties with Turkey.

The geopolitical tone of the Brussels meeting was set in advance with UN chief Antonio Guterres sitting in at the start on Thursday for an extended working lunch with EU leaders before tackling a range of foreign affairs. But an EU official said the burgeoning debate about Hungary's law had become "quite important" and would likely be raised during the first day's working dinner.

That issue was pushed to the forefront of EU politics this week when UEFA, Europe's football governing body, rejected a plan by Munich to light up its stadium in LGBTQ rainbow colors for a Germany-Hungary match on Wednesday. The city reacted by instead decorating many of its monuments - including those next to the stadium - in rainbow tints while French President Emmanuel Macron said UEFA's decision was deeply regrettable. Hungary's right-wing Prime Minister Viktor Orban - long the bete noire of Brussels for his socially conservative policies seen undercutting EU democratic norms - is guaranteed a frosty welcome at this summit.

"This bill clearly discriminates against people on the basis of their sexual orientation," von der Leyen said.

More than half of the EU countries, including heavyweights Germany, France, Italy and Spain, have signed a joint declaration voicing "grave concerns" over the Hungarian law and calling for the commission to act.

A previous 2016 deal under which Turkey has so far received four-billion-euros to prevent migrants crossing to the EU through Greece and Bulgaria is key to EU strategy as it tries to overcome internal divisions to rework its rules on how irregular migrants are processed and hosted.