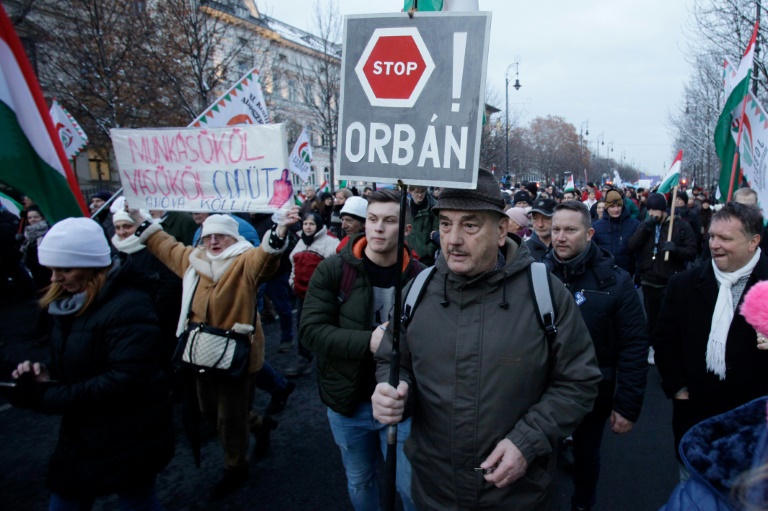 Anti-government protests in Hungary hit the country's public broadcaster on Monday, with the opposition galvanised by the furious reaction to a controversial new labour law.

Several thousand demonstrators gathered in the evening outside the Budapest offices of the MTVA broadcaster after two opposition MPs broadcast footage of themselves being thrown out of the building earlier in the day.

One of the lawmakers had called for people to gather under the slogan: "If they throw us out the door, we'll come back in through the window".

The MPs had demanded access to the studios to read out a petition against the government and what they call its "slave" labour law.

MTVA security guards forcibly ejected independent MPs Akos Hadhazy and Bernadett Szel. The two MPs filed a complaint with police posted in front of the building and said as MPs they had a right to enter a public establishment.

"This is not a private television station for Fidesz," the party of rightwing nationalist Prime Minister Viktor Orban, "but the television of the Hungarian people, financed by the people's taxes," said the MPs, who streamed the altercation live on Facebook.

The petition the lawmakers wanted to broadcast includes a demand to overturn the labour law - which has stirred protests by relaxing restrictions on overtime and by providing for delayed payments.

A third MP was taken to hospital on Monday after another altercation with security at the building.

The rallies were the latest in a wave of protests that has seen opposition parties join forces against Orban's nationalist government.

A fierce nationalist, Orban has riled his EU opponents and domestic critics with a tough anti-immigration stance and populist rhetoric.

'We are fighting the Orban regime'

The new legislation has triggered days of protests -- backed by the opposition -- since it was adopted on Wednesday.

Demonstrators have clashed with police over the law, which they say undermines workers' rights.

The opposition petition also demanded the annulment of another controversial law adopted on the same day, which paves the way for new "administrative courts" to oversee cases concerning matters such as public procurement or electoral disputes.

Justice Minister Laszlo Trocsanyi, a close Orban ally, will oversee the courts. That prompted opposition warnings the premier could have near-total political influence over the judicial system.

The petition also calls for more independence and objectivity in public media outlets and also demands that Hungary join an EU public prosecutor's office, a move the government has rejected.

After the TV station refused to broadcast the petition on Sunday evening, some protesters threw smoke bombs at police, who responded with tear gas.

Around 10 MPs from various opposition parties stayed within the MTVA building for much of Monday, pressing staff to read out the petition.

They later left the building at the police's request, emerging to cheers from protestors.

One of those who was inside the building, MEP Peter Niedermueller from the liberal DK party, said the protest aimed was at "restoring the freedom of the press".

"It's ridiculous that the majority of the country doesn't even know what's happening in Budapest because public TV, on all its channels, is only talking about preparations for Christmas," he said.

"Today we are not just fighting the two controversial laws but the whole of the Orban regime," ex-Prime Minister and DK leader Ferenc Gyurscany told the private Klubradio station.

Apart from the opposiotion, unions have also backed the demonstrations against the reforms, which hike the annual overtime hours that employers can demand from 250 to 400 hours and allow payment to be delayed by up to three years.

Tamas Szekely from Hungary's main confederation of trade unions told the rally on Monday that they would organise a general strike if the reforms are signed into law.

The government says the changes are needed by employers short of manpower and will benefit those wanting to work extra hours.

Over the weekend protestors also gathered in other parts of the country. In the third-biggest city Szeged, the socialist mayor called on businesses not to comply with the new overtime law.