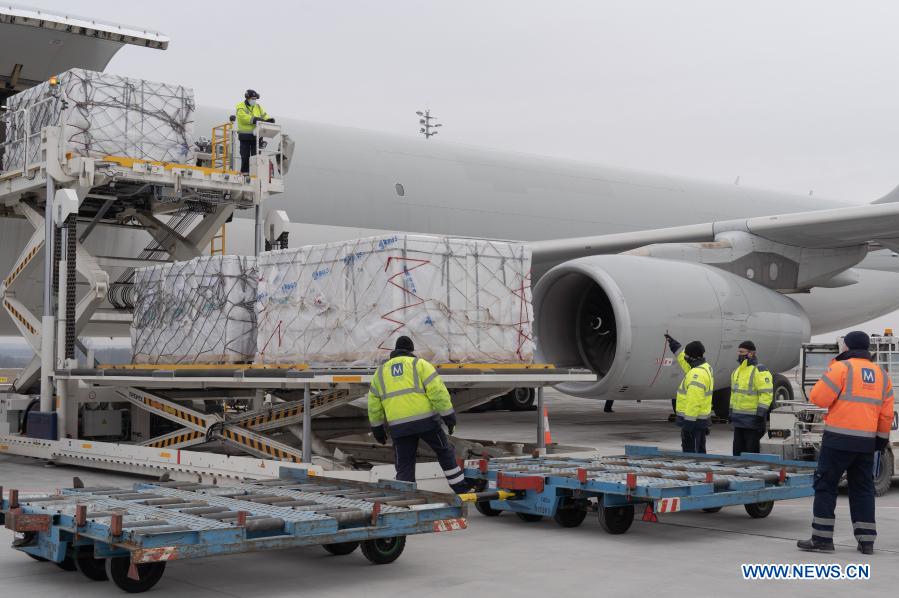 The shipment was welcomed at the Liszt Ferenc International Airport by Tamas Menczer, state secretary from the Hungarian Ministry of Foreign Affairs and Trade, and Chinese Ambassador to Hungary Qi Dayu.

"We are the first country in the EU that uses Sinopharm vaccine. We try to save lives and preserve the economy, and we are fighting together with our Chinese friends against COVID-19," Menczer told Xinhua. "It is a very important day for Hungary."

Qi said that China and Hungary are fighting the coronavirus side by side and the vaccines arriving today display China's commitments to making its vaccine a global public good.

Hungary announced on Jan. 29 that it had signed a deal to buy China's Sinopharm COVID-19 vaccine, which will be used to immunize 2.5 million people.

"This deal will speed up vaccination, which could save the lives of thousands of people and contribute to lifting restrictions sooner," said Hungarian Minister of Foreign Affairs and Trade Peter Szijjarto.

Also on Jan. 29, Hungarian Prime Minister Viktor Orban said in an interview with public radio that he would personally choose to receive the Chinese vaccine, as he trusted it more than others.

"I'm waiting for the Chinese vaccine, I trust in that the most," said Orban. "I think the Chinese have known this virus for the longest, and they probably know it the best."

Hungary has approved the use of Russia's Sputnik V, Britain's AstraZeneca and China's Sinopharm COVID-19 vaccines in addition to the Pfizer-BioNTech and Moderna vaccines acquired through the EU.

Earlier this month, the prime minister said that by March 15, all Hungarian citizens aged over 60 would be vaccinated.

"We have arrived at a turning point: in the past, the virus was on the offensive and we were on the defensive -- now it will be the other way round," Orban said on public radio channel MR1, referring to the increasing number of vaccines administered in the country.

On Tuesday, Hungary registered 823 new COVID-19 cases in the past 24 hours, raising the national total to 389,622, according to the government's website. And 85 more deaths were reported, taking the nationwide count to 13,837.