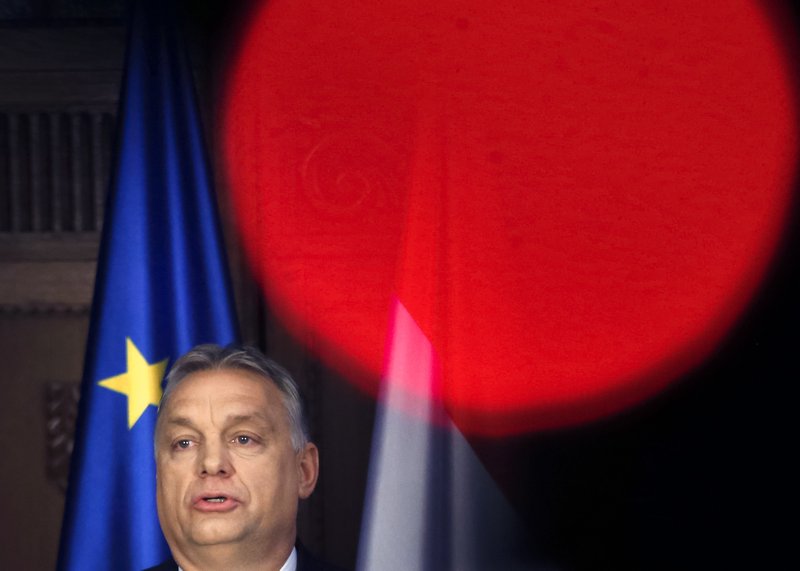 Hungarian Prime Minister Viktor Orban is betting that his relentless campaign against migration will keep his voter base united and motivated for Sunday’s national election.

Since 400,000 people passed through Hungary in 2015 on their way to Western Europe, Orban has made migration the near-exclusive focus of his government. Now, at most, a few people a day reach the country’s borders.

Orban is seeking his third consecutive term and fourth overall since 1998. Most polls predict Orban’s Fidesz party will get around 50 percent of the votes, far ahead of Jobbik, a nationalist right-wing party, the Socialist Party or several smaller left-wing or green groups.

According to Orban and his ministers, Hungary will descend into chaos should it become an “immigrant country” like France or Belgium. He claims that domestic and European Union funds meant for Hungarian families or the country’s 800,000-strong Roma minority will be diverted to migrants, whose presence will weaken Hungary’s security and increase its terror risk.

And if migrants settle in Hungary, Orban claims Hungary’s economic development will end, its support for rural areas will dwindle, women and girls will be “hunted down” and Budapest, the capital, will become “unrecognizable.”

After building razor-wire fences on the country’s southern borders in 2015 to divert the migrant flow, Orban has constructed a grand conspiracy theory. He claims the EU, the U.N., Hungarian-American financier George Soros and the civic groups he sponsors are all conspiring to force Hungary to take in thousands of mainly Muslim migrants to weaken its independence and its Christian identity and culture.

He spoke last month about a “Soros mercenary army” with around 2,000 people “being paid to work toward bringing down the government” in Sunday’s vote.

Still, forecasts about the 199 parliamentary seats at stake are complicated. In Hungary’s complex electoral system, voters cast two ballots — one for a candidate in their voting district and another for a party list. Fidesz should clearly win the party race, which allocates 93 seats, but there are many uncertainties about its performance in the 106 individual districts.

“People may not even vote for their favorite party or candidate but rather for the one with biggest chance” to defeat Fidesz, said Jobbik leader Gabor Vona.

It’s not clear how well the tactic will work.

“As long as the opposition is in a fragmented state ... this migrant/refugee campaign is sufficient to keep (Orban’s) voting base united, to keep it mobilized,” said Balazs Bocskei, political analyst at the Idea Institute, a Budapest think-tank.

Spokesman Zoltan Kovacs says the government’s “Stop Soros” package, which has been submitted to parliament, aimed to close “legal loopholes.”

“So-called NGOs camouflaging themselves as philanthropic and human rights groups are basically going against the established rules of this country and the European Union, helping illegal immigration happen,” Kovacs said.

The bill has yet to be passed but its effects are already being felt.

“The ‘Stop Soros’ package ... already results in considerable self-censorship from our part. For reasons of safety, we don’t work anymore the way that we used to,” said Annastiina Kallius of the Migrant Solidarity Group of Hungary.

Opposition leaders reject Orban’s claims that they are controlled by Soros and support mass immigration.

“It’s all a huge delusion,” said Gergely Karacsony, the prime ministerial candidate of the Socialist Party and his own Dialogue party. “Since they can’t govern, they are trying to hold on to power by deceiving the people.”

Vona said Jobbik was strongly anti-migration “but we don’t want to manipulate and scare people with this issue.”

Some experts say there is no alternative to Orban for Hungary’s conservative voters.

“Unfortunately, for those on the right who are disappointed with Orban, there is no democratic conservative alternative like Germany’s CDU or a French Macron-type party,” said Paul Lendvai, a journalist and author of “Orban: Hungary’s Strongman.” ″Someone who is angry with him can only show it by not going to the polls.”

The one thing opposition parties do agree on is the need to reverse many of Orban’s policies, which they call anti-democratic. They are vowing to restore the democratic system of checks and balances, expand press freedom, join the European Public Prosecutor’s Office to enhance anti-corruption efforts and allocate more funds to education, health care and fighting poverty.

“The Orban regime is a hybrid regime between democracy and dictatorship,” Karacsony said. “This isn’t one election among many, where people vote about their judgment of a good or fairly good government. This is about the social model which has solidified in Hungary.”