A week after a powerful earthquake rattled Haiti, humanitarian aid from international organizations and countries poured in. But deliveries to remote areas have been hindered by complex situations. 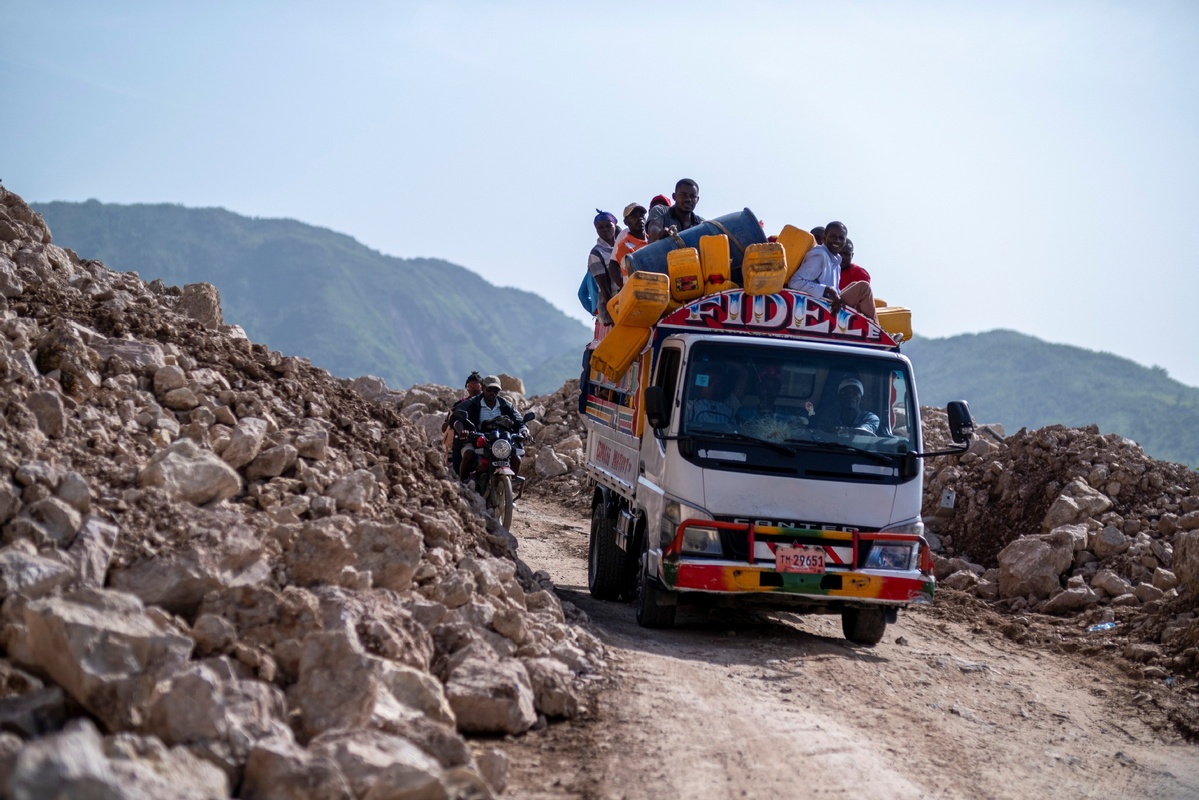 People ride on a bus through a road partially blocked by rocks from a landslide after the 7.2 magnitude earthquake that took place on Aug 14, in Pestel, Haiti Aug 23, 2021. (Photo: Agencies)

On Aug 14, Haiti was hit by a 7.2-magnitude earthquake, one of the strongest ever to hit the country, killing more than 2,200 people and destroying tens of thousands of buildings.

Amina Mohammed, deputy secretary-general of the United Nations, arrived at the site on Friday and described the situation as tragic, referring to the huge damage and loss of life.

Families gathered in villages in southwestern Haiti over the weekend for church and funeral services. Collapses of churches in some of the worst-affected towns and villages in the Caribbean nation left residents to grieve in open fields.

At the Paroisse Saint-Joseph de Simon Roman Catholic church on the outskirts of Les Cayes, a southwestern city that bore the brunt of the quake, about 200 worshippers gathered early for the first Sunday Mass since the disaster.

"Everyone was crying today for what they had lost," said the priest, Marc Orel Sael. "And everyone is stressed because the Earth is still shaking," he added, referring to near-daily aftershocks that have rattled nerves all week.

Over the past week, various international organizations and countries have expressed condolences to the victims of the devastating quake and offered humanitarian assistance to support Haiti.

On Sunday evening, the French Embassy in Haiti said 40 French rescue workers had arrived, bringing a water treatment unit to Les Cayes that will provide up to 220,000 liters of drinking water a day.

A representative of an organization that have sent aid said that most of the donations are medical supplies, probably the most necessary aid at the moment, as many hospitals have been damaged or destroyed. Hospitals that are currently operating have been completely overwhelmed, lacking sufficient personnel and medical supplies.

However, it is challenging to deliver aid to remote quake-hit communities as the roads leading to those areas were often flooded or covered by debris from landslides left by the earthquake.

The terrain and limited means of transport have rendered delivery of already scarce aid difficult. Rescue and aid work have been further complicated by Tropical Storm Grace, which threatened to dump more than 25 centimeters of rainfall over the areas hardest hit by the earthquake and likely to trigger flash floods and mudslides.

"And this disaster coincides with political instability, rising gang violence, alarmingly high rates of malnutrition among children, and the COVID-19 pandemic," Fore said.