WORLD Hurricane Delta bears down on storm-battered US south coast

Hurricane Delta bears down on storm-battered US south coast

Hurricane Delta churned toward the Louisiana coast Friday packing ferocious winds and potential for a dangerous storm surge and flooding -- prompting the evacuation of people still rebuilding from a devastating storm less than two months ago. 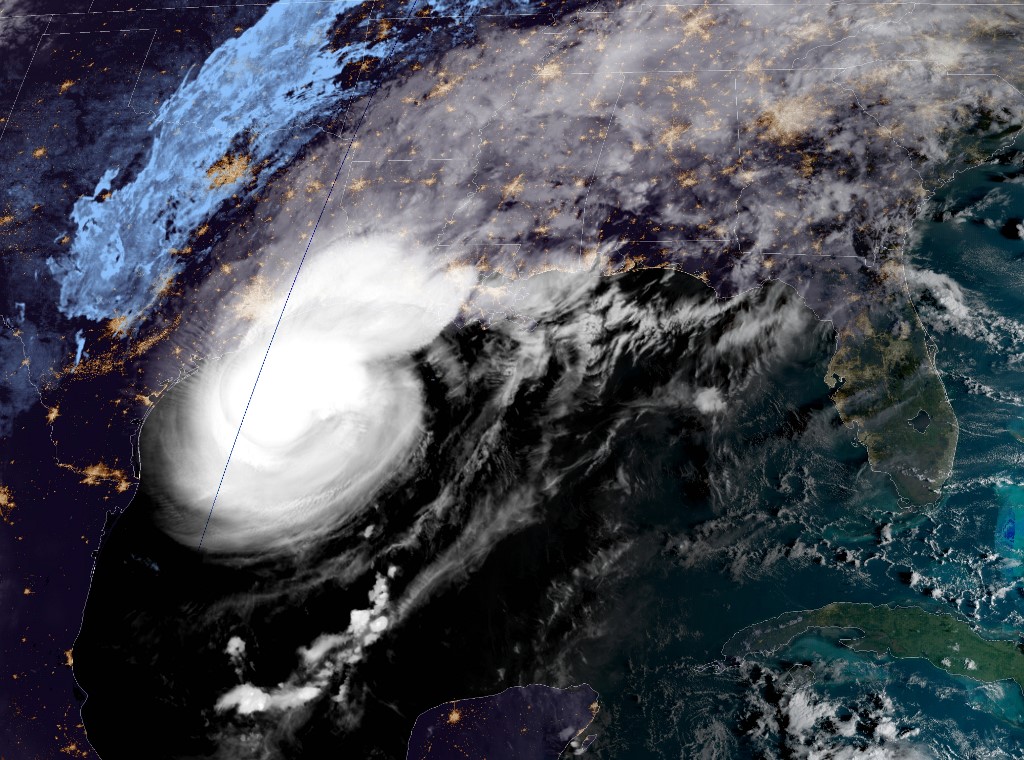 This National Oceanic and Atmospheric Administration satellite image shows Hurricane Delta moving towards the US on October 9, 2020, at 12:21UTC. (Photo: AFP)

The storm toppled trees and torn down power lines in Mexico's Yucatan Peninsula as it swept over the western Gulf of Mexico. But the region escaped major destruction and no deaths were reported.

It is now heading north with winds of up to 120 miles (195 kilometers) an hour and is expected to bring a life-threatening storm surge of up to 11 feet (three meters) in some areas, the National Hurricane Center said.

The Category 3 storm is forecast to hit the Louisiana coast Friday evening, weakening slowly at first and then more rapidly as it moves inland, the Miami-based center said. Category 3 -- on a five-step scale -- means devastating damage is possible.

In Lake Charles, a city in southwest Louisiana that was hit hard by Hurricane Laura on August 20 and is now in the path of Delta, the streets were deserted Friday morning as a steady rain fell.

The city is still in disarray from Laura, which was a Category 4 and ripped roofs off houses and uprooted trees. The streets are still littered with debris.

"I don't even know if we'll have a house when we come back," said Kimberly Hester, who lives in Lake Charles.

"I just pray to God every night we can at least have a house to come home to."

Cristy Olmsted, 41, said she had decided to ride out Delta because evacuating is too stressful. She put boards up to protect her windows and door and said her main worry was Delta kicking up debris loosened by the last hurricane.

"The last one was the worst one, this one cannot be worse," said Olmsted, who works for an electrical utility and lives with her boyfriend.

Hurricane Delta will hit "in the area of our state that is least prepared to take it," he said late Thursday.

In Lake Charles, Shannon Fuselier drilled plywood over the windows of a friend's home as protection from flying debris.

Many neighborhood houses are covered with tarps from previous hurricane damage, and the home Fuselier was working on had already suffered roof damage from a fallen tree and smashed windows during Laura.

"The branches and leaves don't do that much damage," said Fuselier, 56. "It's pieces of metal, steel, frames of other peoples windows, signs from people's stores, nails."

Fuselier said she was staying because she didn't think the storm was strong enough for her to flee.

Edwards has already warned that Delta could sweep up old debris and hurl it like missiles.

Terry Lebine had already evacuated to the town of Alexandria, some 100 miles (150 kilometers) to the north, during the previous hurricane, and was ready to head out again.

"It's exhausting," she told AFP. "...I've got my mother, she's 81 years old and not in the best of health. Right after we went back home after Laura, we have to leave again for Delta. We were home a good two to three weeks."

Delta is the 26th named storm of an unusually active Atlantic hurricane season.

In September, meteorologists were forced to break out the Greek alphabet to name Atlantic storms for only the second time ever, after the 2020 hurricane season blew through their usual list, ending on Tropical Storm Wilfred.

As the ocean surface warms due to climate change hurricanes become more powerful -- and scientists say there will likely be an increase in powerful Category 4 and 5 storms.