Hurricane Dorian closes in on Florida coast after battering Bahamas 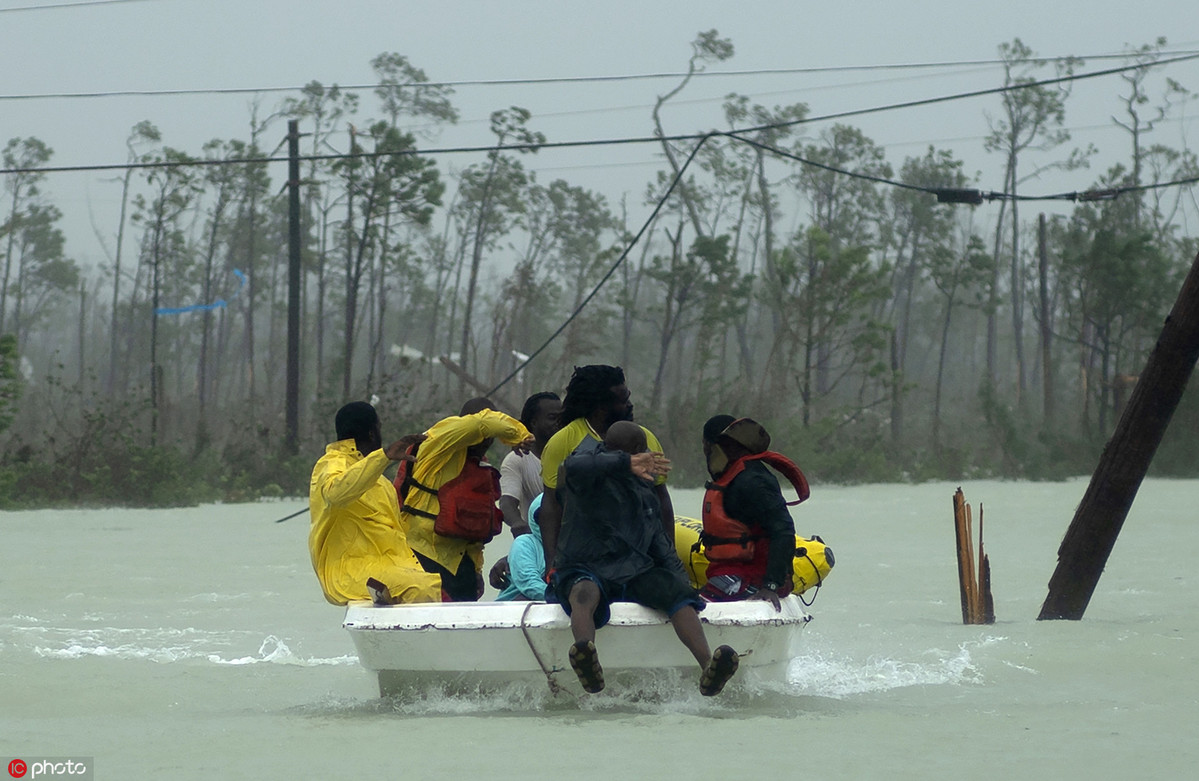 Volunteers rescue a family from the rising waters of Hurricane Dorian, near the Causarina bridge in Freeport, Grand Bahama, Bahamas, Sept 3, 2019. (Photo: IC)

MARSH HARBOUR - Hurricane Dorian grew and picked up speed, churning on a path that forecasters said would come "dangerously close" to Florida later on Tuesday after the storm battered the northern Bahamas, killing at least five people.

Dorian over the weekend was one of the most powerful Atlantic hurricanes on record, pulverizing buildings and flooding parts of the Abaco Islands in the northern Bahamas.

On the US East Coast, more than a million people have been ordered evacuated ahead of its expected advance.

The hurricane weakened early on Tuesday to a Category 2 on the five-step Saffir-Simpson Wind Scale, packing maximum sustained winds of 110 miles per hour (175 km per hour) and moving northwest at 5 mph (8 kph), the Miami-based National Hurricane Center said.

The NHC warned that Dorian remained dangerous as it churned about 105 miles (116 km) east of Fort Pierce, Florida. It said the hurricane was moving offshore, nearly parallel to Florida's east coast.

In the Bahamas, Dorian lashed the islands, including Great Abaco and Grand Bahama Island, for about 24 hours. Aerial video recorded over Great Abaco showed widespread devastation, with buildings flattened or missing roofs and walls, boats upturned and shipping containers scattered about like toy bricks. Entire neighborhoods could be seen under water.

The exact toll will not be clear until the storm completely passes and rescue crews can get on the ground.

Theo Neilly, the Bahamian consul general in Washington, said the damage on Grand Bahama was expected to be "very devastating." He said many people were still trapped in their homes and attics because of a strong sea surge.

Although Dorian is moving away from Grand Bahama, forecasters said dangerous winds and a life-threatening storm surge would persist through the evening.

Iram Lewis, a Bahamian member of Parliament, said on CNN the death toll would likely climb.

"It is safe to say, unfortunately, that that number will go up," Lewis said. "It is just unbelievable."

As many as 13,000 homes in the Bahamas may have been destroyed or severely damaged, the International Federation of Red Cross and Red Crescent Societies said.

Abaco may require food for 14,500 people and Grand Bahama for 45,700 people, the UN World Food Programme said in a statement. The preliminary estimates were based on an assessment by representatives from Caribbean countries, the WFP and other organizations.

The US military has been authorized to provide logistics, health and engineering support to the Bahamas for up for 14 days if needed, General Terrence O'Shaughnessy, the head of US Northern Command, told reporters on Tuesday.

Efforts to reach officials in the Bahamas by phone on Tuesday were unsuccessful.