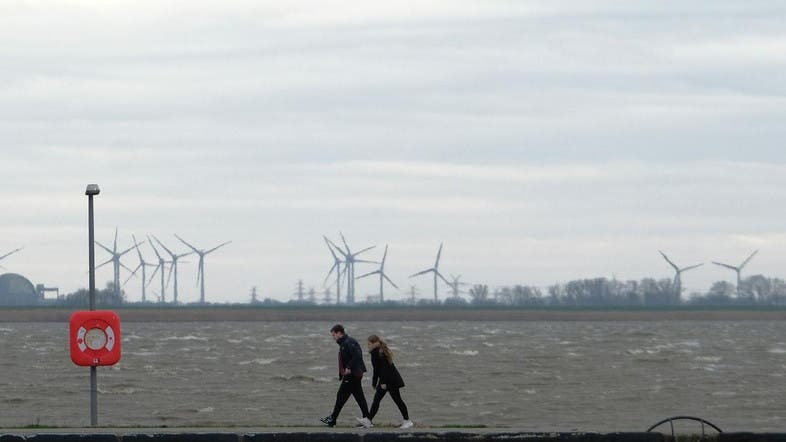 People walk along a seawall at the North Sea in Bremerhaven, northern Germany, on February 9, 2020. (AFP)

BERLIN, Feb. 10 (Xinhua) -- Hurricane-force winds and heavy rain swept over Germany and caused severe disruptions to road, rail and air traffic over the past two days.

Germany's National Meteorological Service issued the second highest weather warning level for most parts of Germany on Sunday. Large sporting events were cancelled and many schools remained closed on Monday as a precautionary measure.

The cathedral in Frankfurt was damaged when the jib of a building crane buckled and crashed into the roof of the cathedral.

Railway company Deutsche Bahn (DB) announced on Sunday that long-distance trains were completely stopped for safety reasons "because of the heavy hurricane."

According to DB, several hundred passengers made use of residence trains during the night. It is not clear when trains would run again. DB said that the inspection of the routes would take some time.

The General German Automobile Club told Xinhua on Monday that several sections of federal and state roads as well as motorways were still closed because of fallen trees and blocked roads.

There were also delays and flight cancellations on German airports. At Cologne Bonn Airport, more than 80 take-offs and landings were cancelled on Sunday and Monday, a spokesperson of the airport told Xinhua.

At Munich Airport, the second largest airport in Germany, a total of 600 take-offs and landings were cancelled on Sunday and Monday, a spokesperson of the airport told Xinhua.