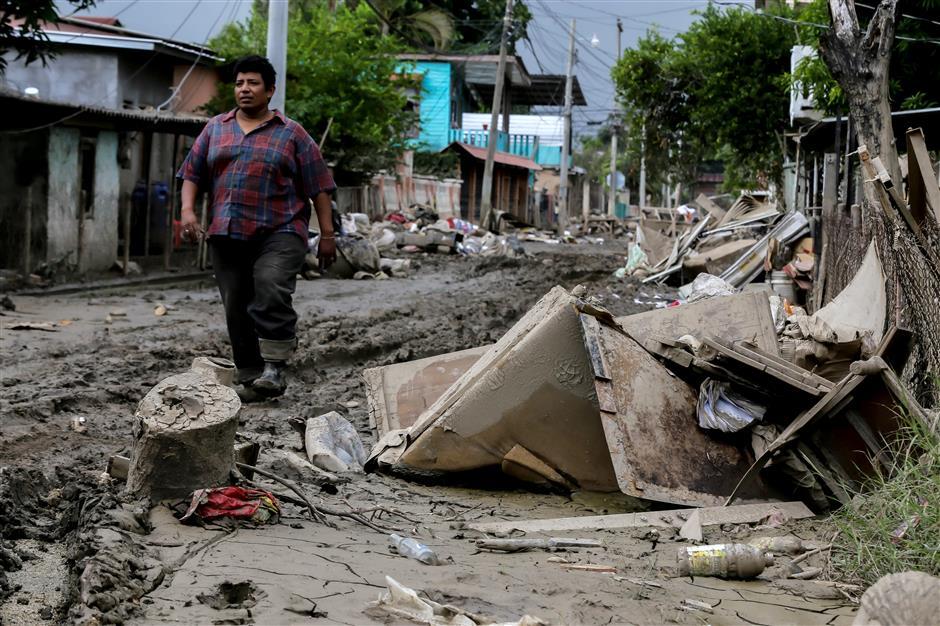 A man walks along debris in street in La Lima, Cortes in Honduras on Monday as Hurricane Iota moved over the Caribbean toward Nicaragua and Honduras.(Photo: Agencies)

In a one-two punch, Hurricane Iota roared ashore as a dangerous Category-4 storm along almost exactly the same stretch of Nicaragua’s Caribbean coast that was devastated by an equally powerful Hurricane Eta 13 days earlier.

Iota had intensified into an extremely dangerous Category-5 storm on Monday, but the US National Hurricane Center said it weakened slightly as it neared the coast late on Monday and made landfall with maximum sustained winds of 250 kilometers per hour.

It hit the coast about 45 kilometers south of the Nicaraguan city of Puerto Cabezas, also known as Bilwi.

People hunkered down in Bilwi, already battered by screeching winds and torrential rains.

Iota came ashore just 25 kilomters south of where Hurricane Eta made landfall on November 3. Eta’s rains saturated the soil in the region, leaving it prone to new landslides and floods.

“The situation is exacerbated by the fact that Iota is making landfall in almost the exact same place category-4 Hurricane Eta did a little less than two weeks ago,” the Hurricane Center said.

“This hurricane is definitely worse” than Eta, Jason Bermúdez, a university student from Bilwi.

“There are already a lot of houses that lost their roofs, fences and fruit trees that got knocked down,” said Bermúdez. “We will never forget this year.”

“The situation doesn’t look good at all,” Wriedt said.

“We woke up without electricity, with rain and the surf is getting really high.”

Wriedt said Eta pushed the surf up to just behind her house, where she lives with eight other members of her family. “Today I’m afraid again about losing my house and I’m frightened for all of us who live in this neighborhood.”