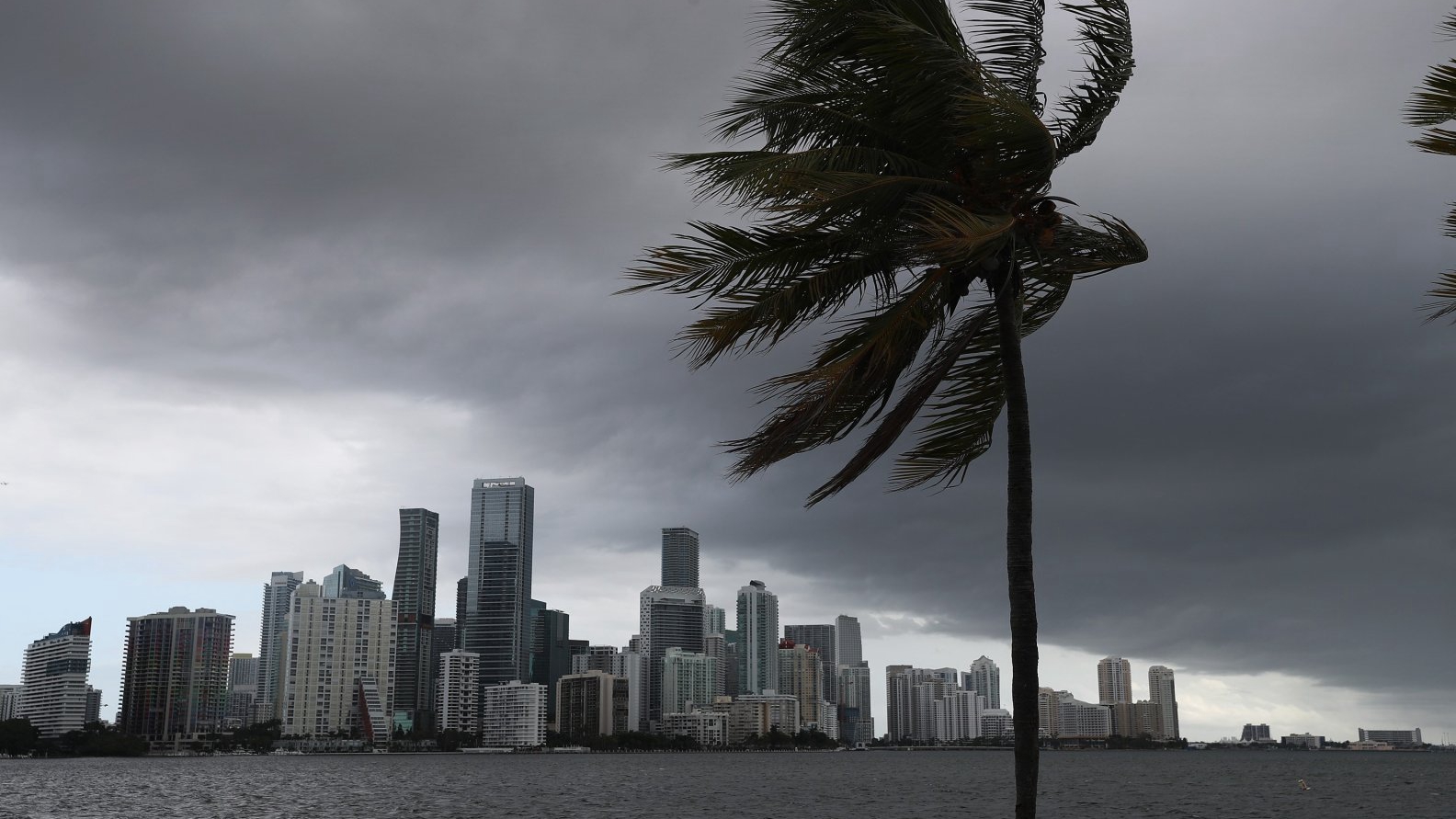 Storm clouds are seen over the city as Hurricane Isaias approaches the east coast of Florida on August 1. /AFP Photo

Hurricane Isaias snapped trees and dumped torrential rains as it barreled through the Bahamas on Saturday and churned toward the Florida coast as a tropical storm, the first big test for the U.S. state reeling from the COVID-19 crisis.

Isaias was downgraded to a tropical storm but is expected to grow stronger overnight. It is about 80 miles southeast of Fort Lauderdale, moving slowly toward Florida with winds swirling at about 70 miles per hour. President Donald Trump declared an emergency ahead of the storm's arrival to free up federal funds.

The area was already receiving gusty showers late Saturday afternoon, and "We will start seeing impacts from the storm tonight and then obviously through tomorrow into tomorrow night," Florida Governor Ron DeSantis said Saturday evening, adding that Palm Beach County had issued a voluntary evacuation order.

Isaias is piling another burden on communities already hard-hit by previous storms and the pandemic.

Florida authorities closed beaches, parks and virus testing sites, lashing signs to palm trees so they wouldn't blow away. The governor warned residents to expect power outages and asked to have a week's supply of water and food on hand. Officials wrestled with how to prepare shelters for people to seek refuge, if need be, while safely social distancing because of the virus.

Authorities in North Carolina ordered the evacuation of Ocracoke Island, which was slammed last year by Hurricane Dorian. Meanwhile, officials in the Bahamas opened shelters for people in Abaco island to help those who have been living in temporary structures since Dorian devastated the area, killing at least 70 people.

Despite the approaching storm, NASA says the return of two astronauts aboard a SpaceX capsule is still on track for Sunday afternoon. Doug Hurley and Bob Behnken are preparing to make the first splashdown return in 45 years, after two months docked at the International Space Station. They are aiming for the Gulf of Mexico just off the Florida Panhandle, and flight controllers are keeping close watch on the storm.

In the Bahamas, the deputy director of the country's meteorology department, Jeffrey Simmons, told The Nassau Guardian "the worst part" of the storm came to New Providence, the most populous island, early Saturday.

It is the archipelago's first hurricane since Dorian, a Category 5 storm last year that devastated two islands, pummeling them for three days. Concerns about the coronavirus and the vulnerability of people who are still recovering from Dorian were adding to storm worries.

The Bahamas has reported more than 570 confirmed COVID-19 cases and at least 14 deaths. It recently barred travelers from the U.S. following a surge in cases after it reopened to international tourism.

As the storm moves now toward Florida, a hurricane warning is in effect from Boca Raton to the Volusia-Flagler county line, which lies about 150 miles (240 kilometers) north. A storm surge watch is in effect for Jupiter Inlet to Ponte Vedra Beach.

Coronavirus cases have surged in Florida in recent weeks, and the added menace of a storm ratcheted up the anxiety. State-run virus testing sites are closing in areas where the storm might hit because the sites are outdoor tents, which could topple in high winds.

Natalie Betancur, stocking up at a grocery in Palm Beach Gardens, said that the storm itself doesn't cause her great concern. But, she added, "I feel that the public is really panicking because it's a hurricane and we're in the middle of a pandemic."

DeSantis, the governor, said Saturday that 16 counties have declared states of emergency, although no immediate evacuation orders were given. The Republican also said hospitals are not being evacuated of coronavirus or other patients.

Isaias is seen as a major test for emergency systems in Florida, one of the U.S. states hardest hit by the coronavirus crisis.

Only California, with almost double Florida's population of about 21 million people, has registered more cases.