Hurricane Michael, which has so far killed at least 17 people across four US states, threatened to wipe a Florida beach town off the map, according to officials who described the devastating storm as the "mother of all bombs."

The Category 4 hurricane, one of the strongest in US history, made landfall on Wednesday, battering Florida's northwest coast near Mexico Beach with winds of 250 kph. The storm fell just 3 kph short of a top-level Category 5 but ravaged entire neighborhoods before moving out to the sea on Friday.

Aerial images of Mexico Beach before and after Hurricane Michael passed through, released by the National Oceanic and Atmospheric Administration (NOAA), offer a stark look at how there's nothing left in some parts of the beach town where houses once stood. 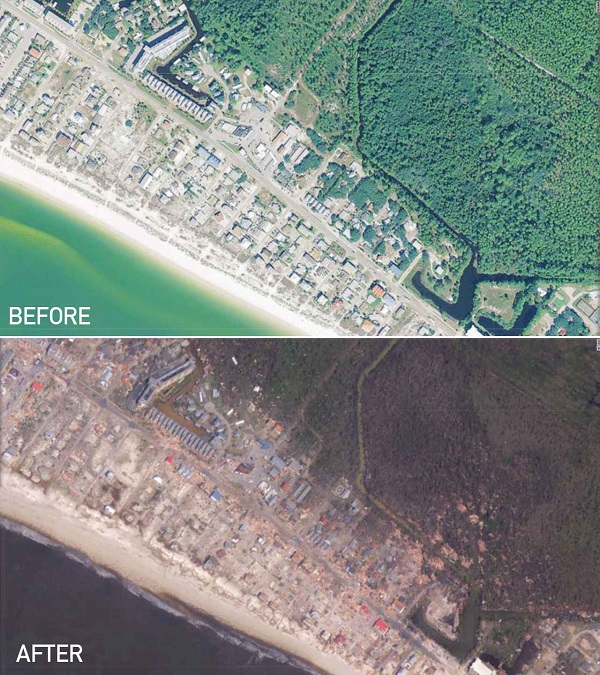 A combination of aerial images released by the National Oceanic and Atmospheric Administration (NOAA) shows parts of the Mexico Beach before and after being ravaged by Hurricane Michael. (Photos: CGTN via NOAA)

Mexico Beach, where Hurricane Michael unleashed its most violent rains and winds, hasn't reported any deaths yet, but rescuers are still rummaging through the devastated area. They "still haven't got to some of the hardest-hit areas," BBC quoted emergency management officials as saying.

The storm has left more than one million homes without power in the southeastern US states of Florida, Alabama, Georgia, Virginia, and the North and South Carolinas. 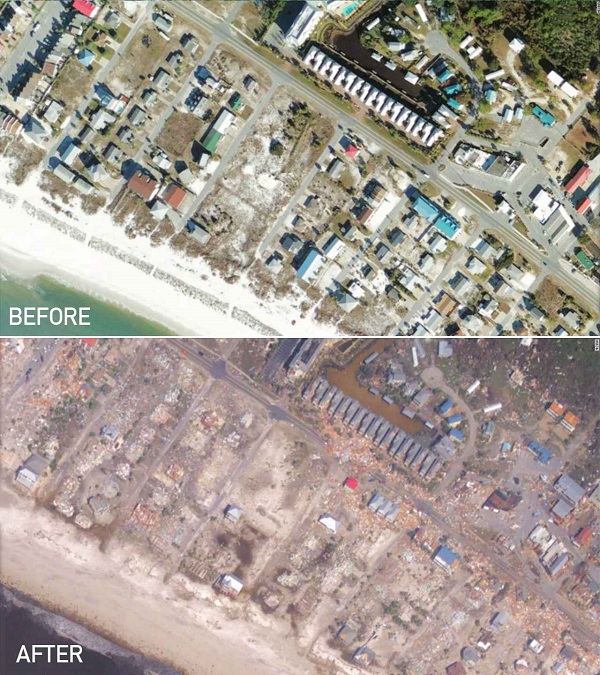 A combination of aerial images released by the National Oceanic and Atmospheric Administration (NOAA) shows parts of the Mexico Beach before and after being ravaged by Hurricane Michael.

"The city has been devastated - it's like a bomb went off. It's like a war zone," Scott told AFP. "Lots of stuff is unstable, so I want everyone to be cautious." While food and water distribution is well underway, "we continue to have needs, and I expect the federal government to do their job," he added.

"The mother of all bombs doesn't do any more damage than this," Tom Bailey, the former mayor of Mexico Beach, told The New York Times. 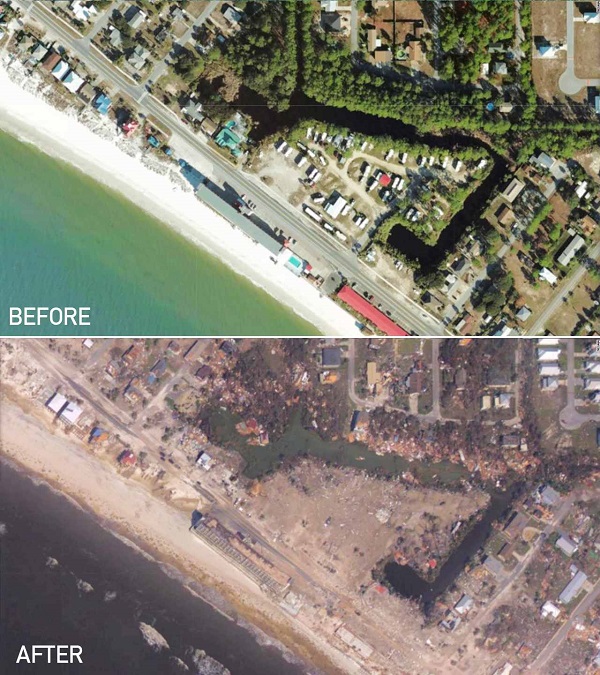 A combination of aerial images released by the National Oceanic and Atmospheric Administration (NOAA) shows parts of the Mexico Beach before and after being ravaged by Hurricane Michael.

Since late Friday, residents have been taking stock of the damage, reuniting with their loved ones, and bracing for what will be a long, difficult clean-up operation.

Some came Friday with vans or moving trucks, hoping to recover as many personal effects from their splintered homes as they could. Others came with nothing - as there is nothing left to save.

Charles Smith, 57, has run the beachfront Gulf View Motel for 34 years. Now, it stands in ruins.

The facade was destroyed, the windows shattered. Three beach houses on stilts plowed into the building. 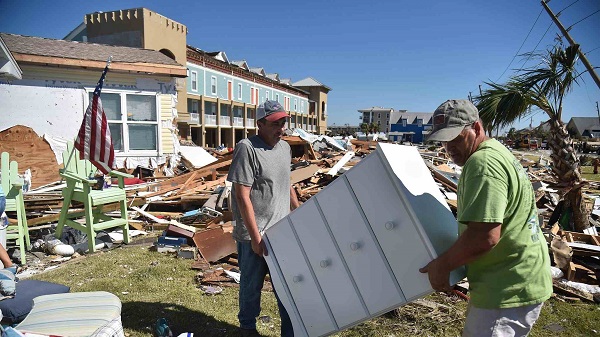 Men recover furniture from their damaged houses in the aftermath of Hurricane Michael, in Mexico Beach, Florida, US, October 12, 2018. (Photos: VCG)

"I couldn't open the back door because of water. Wind came in, knocked the windows off - the refrigerator is now stuck in the bathroom," Smith told AFP, surveying the horrendous mess.

But the hotelier said he is determined to get back on his feet.

"Maybe FEMA will help me out - I would appreciate that," he said, referring to the Federal Emergency Management Agency.

"I'm going to get my business back, get an architect, go to city planning - maybe I get my motel back within two years. It's going to take three to six months just to get electricity in here," he predicted. "It's going to be a fight." 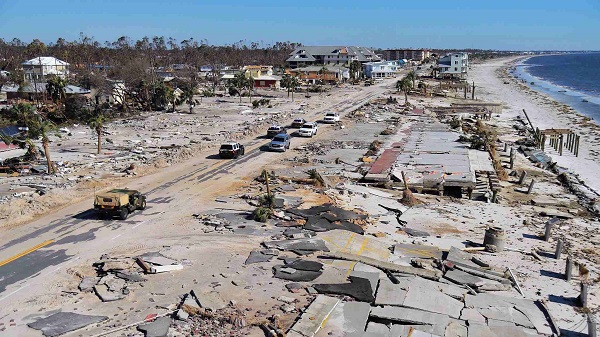 A general view of the damage caused by Hurricane Michael in Mexico Beach, Florida, October 12, 2018.

Emergency crews have set up a temporary cell phone tower to help residents cut off by Michael's fury.

Firefighters, rescuers, personnel from Florida and other states, and FEMA have set up a task force headquarters in the seaside community and have split up responsibility for the area into different search zones.

From first light on Friday, excavators and dump trucks cleared roads to allow traffic, specifically aid convoys, to get through.

But a bridge was washed out between the city and Port St. Joe to the southeast, making it impossible to get there via coastal roads.

'Take what you need' 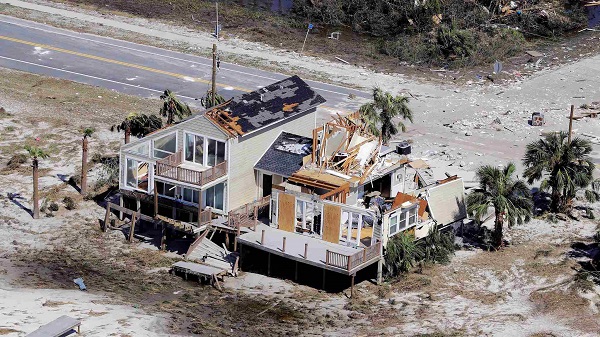 Further down the beach from the Gulf View Motel, a local supermarket is beyond repair, its doors smashed in. Locals are helping themselves to snacks, cigarettes and even bottles of booze.

One young woman, who asked not to be identified, said the owners told residents to help themselves.

"'Take what you need but only what you need,' they said," the woman told AFP, a bottle of liquor in her hand. "This is all we need right now."

Bob Tenbrunson, a retiree, fled his home in Mexico Beach before Michael hit, taking shelter in nearby Panama City with his wife at their daughter's home.

After seeing the damage, he set about fixing what he could. 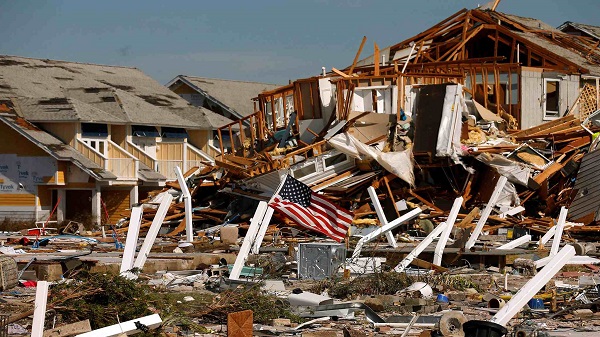 An American flag flies among rubble left in the aftermath of Hurricane Michael in Mexico Beach, Florida, US, October 11, 2018.

Tenbrunson, his hands dirty from clearing away debris, said he had spent his life savings and his retirement pension on his home here.

"I can't sell it now so I just have to be hopeful that (the city) will be rebuilt and fixed," he said. "I just can't imagine how it is going to look. Several of our nice restaurants in town are no longer there."

Tenbrunson admitted he was not meant to be in town - emergency personnel have asked residents to stay away to allow the sniffer dogs to hunt through the debris for victims.

"This is really a beach town - no high-rise buildings. It makes me sad," he admitted with a sigh.