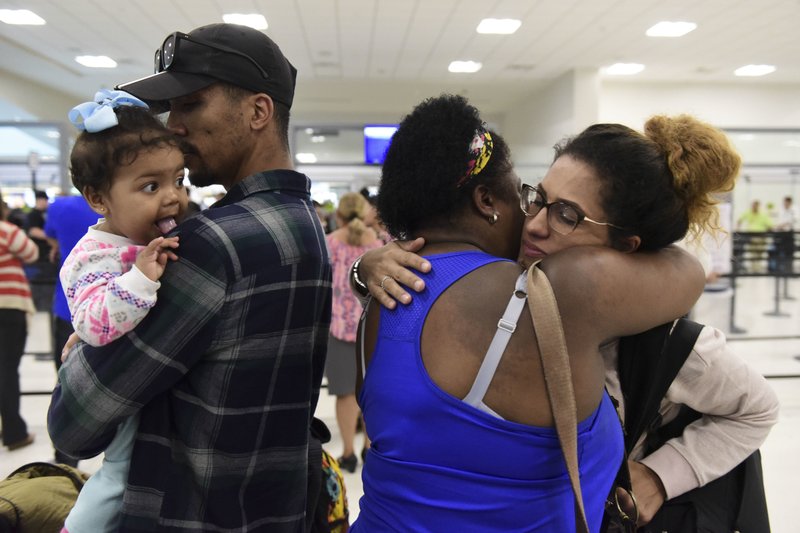 The disaster wrought by Hurricane Maria has set off an anguished debate across Puerto Rico, where friends, family and co-workers are arguing fiercely over the morality of leaving the blacked-out island for the U.S. mainland versus fulfilling a patriotic duty to rebuild.

More than 140,000 Puerto Ricans have left since the storm hit Sept. 20 and some experts estimate more than 300,000 more could leave in the next two years. That’s on top of a similar-size exodus over the last decade of economic crisis, creating a massive population loss for the U.S. territory of 3.4 million.

Most of those who have left went on their own. Aid groups and the U.S. government helped evacuate large numbers of the elderly and sick. The Federal Emergency Management Agency said it has offered to help relocate those still in temporary shelters, about 2,400 people as of Friday, to temporary housing on the mainland.

Many of those leaving are facing recriminations from fellow Puerto Ricans who accuse them of abandoning their homeland when it needs them the most.

Nilsa Montes, an unemployed waitress, said her friends and family often talk negatively about those who have left.

“They always get criticized because people point out, ’Hey, you didn’t stay,’” she said. “I wouldn’t move because I don’t give up.”

The drive to stay in Puerto Rico and help rebuild has become a sociocultural movement with its own slogan echoing Montes: “Yo no me quito,” or “I’m not giving up.”

Those four words have become a popular hashtag posted next to pictures on social media of Puerto Ricans rebuilding homes, distributing food and water or simply relaxing on the beach. Some who left or are leaving respond with messages that they would stay if someone found them a job, power or water.

The “yo no me quito” message carries so much meaning that when Denise Centeno, who runs the Hispanic Family Counseling center in Orlando, Florida, recently played “The Blessed Island” by a singer who included those four words in its lyrics, she provoked an unexpected reaction from clients.

“People who had come from Puerto Rico were crying with a horrible feeling of guilt,” she recalled. “They feel like, ‘Wow, I gave up. I wanted to stay.’... Of course they feel hurt.”

In a recent chain of comments on Twitter about the merits of staying against going, one Puerto Rican wrote: “Those of you who left are fleeing from catastrophe while those of us who stay will lift the flag even higher than it already is.”

People who have left bridle at the criticism.

Carlos Rodriguez, an unemployed security guard and volunteer paramedic, moved with his wife and two young girls to the U.S. mainland on Nov. 2 from their hometown of Cayey, nestled in Puerto Rico’s once-lush central mountains. The family lost its home and car to the storm and is now sleeping on the couch of a relative in Providence, Rhode Island, while looking for permanent housing and a job for Rodriguez. His parents, however, stayed in Puerto Rico.

“You have no idea how much I would like to be able to help my family,” Rodriguez said by phone from Providence. “I’m here trying to do that.”

Maria downed trees, homes and power lines in a 12-hour rampage with winds of up to 154 mph (247 kph). Much of Puerto Rico remains without power and 15 percent has no running water more than a month after the hurricane. It is the longest blackout in U.S. history, and officials have said the overall hurricane damage could range from $45 billion to $95 billion on an island already mired in an 11-year-long recession.

The post-hurricane exodus will have its own economic impact, said economist Joaquin Villamil, chairman and CEO of Estudios Tecnicos, an economic consulting firm.

“It is having a terrible effect,” he said, noting that retail sales are already down, and that the shrinking population will lead to a drop in tax collections and affect multiple sectors including housing. “Not only are you going to have an older population, but it will be poorer.”

Professionals are leaving at alarming rates, and the island could see an overall 25 percent drop in population from 2000 to 2025, with 3 million people or less expected to remain by that year, down from 3.8 million nearly two decades ago, Villamil said.

“It’s a very serious problem,” he said. “The demographic transition is the driver of what happens here economically and socially.”

The debate about staying or going is rooted in Puerto Rico’s status as a U.S. territory. While their island isn’t a state, Puerto Ricans can seamlessly move elsewhere in the U.S., but many feel an identification with the island that is akin to national pride.

“We need to stay here and help each other. Why are they running away from this problem?” said Sharon Velazquez, a homemaker who lives with her family in the western municipality of San Lorenzo, one of the hardest hit by Hurricane Maria. “We are not giving up ... We have to keep fighting.”

The fight isn’t new in Puerto Rico. About a half million people have left in the past decade as a result of the long economic crisis, according to a report by the Center for Puerto Rican Studies at Hunter College in New York.

“For some years now, there has been some resentment,” said Luis Martinez-Fernandez, a history professor at University of Central Florida who focuses on Puerto Rico culture. “Those who were adamant about staying and making that point, they have dug deeper in their position.”

Of the more than 140,000 islanders estimated to have left since the storm, more than 130,000 went to Florida alone, followed by Pennsylvania, Texas, New York and New Jersey, researchers at Hunter College said. Among them are an estimated 14,000 public school students, Education Secretary Julia Keleher said.

Ivone Nieves, a teacher, spent three days working in water up to her ankles after Maria, then decided to move to Orlando. She arrived Nov. 1, and her partner and four children are scheduled to arrive Dec. 4.

The family was left without water or power, and Nieves said she wants a better future for her children. She said she already has two job offers.

“We can help lift up the island from anywhere in the United States,” she said.