The heating and air conditioning in Carrie Johnson’s home — damaged by Hurricane Matthew in 2016 — still wasn’t fixed when Hurricane Florence flooded her house last September. Now, her home of over 50 years is gutted, the flooring and walls nothing more than bare wooden beams smelling faintly of river water. 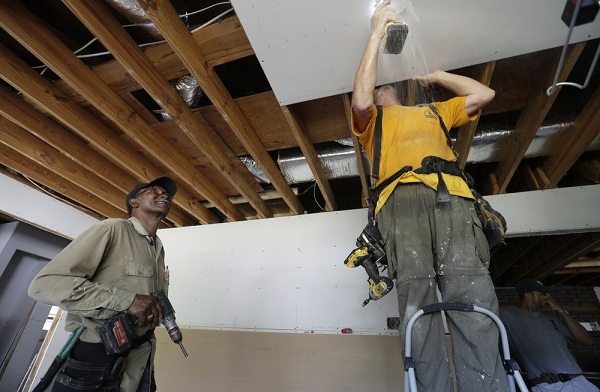 In this Tuesday, July 2, 2019, photo, homeowner Clifton Hall, left, watches and helps volunteer Tom Poston, with Baptists On Mission, make repairs to Hall's home which was damaged by Hurricane Florence the year before, in Spring Lake, N.C. (Photos: AP)

“The little bit of money I got, it wouldn’t even fix this room, I don’t think, let alone the rest of the house,” Johnson said.

For Johnson and many other displaced hurricane victims, the next step would be seeking longer-term federal rebuilding funds administered by the state. But based on slow payouts after Matthew, they fear the process could take years. 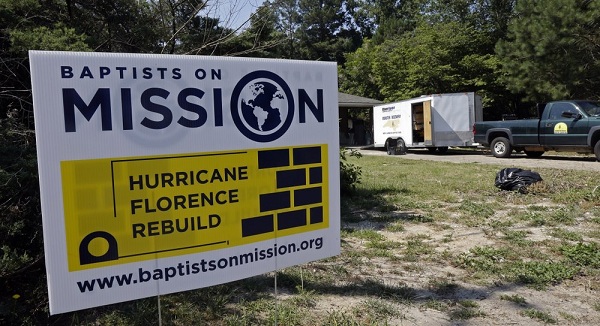 In this Tuesday, July 2, 2019, photo, signage is seen in the front yard of a Brinkley Street home as volunteers assist homeowners with ongoing repairs due to damage caused by Hurricane Florence the year before, in Spring Lake, N.C.

The U.S. Department of Housing and Urban Development awarded North Carolina a community block grant of $237 million for Matthew recovery, but as of July the state had spent only about 6%, according to Laura Hogshead, chief operating officer of the state Office of Recovery and Resiliency. By comparison, South Carolina spent 22% of its award for Matthew by December 2018.

Hogshead said South Carolina was already established as a grantee, whereas North Carolina had to apply for grantee status before receiving funds.

“So for the first 311 days, the state had literally no ability to pull on those funds,” she told lawmakers in May.

HUD spokesman Brian Sullivan declined to comment beyond referring a reporter to online materials that characterize North Carolina as a “slow spender” of its Matthew-related grant.

Delays also have been blamed on a lack of institutional knowledge about this type of funding, which the state hadn’t received since 2003 and is subject to regulations that change over time.

It’s unclear how long this process will take for Florence, which flooded an estimated 74,500 homes. HUD announced in May it will award North Carolina $336.5 million in community block grants for the storm, but spending rules must be settled first.

Once that money comes, Hogshead said, the state will be ready to spend it.

“Everything the state has done to set up Matthew assistance will speed up Florence assistance,” she said in an interview. 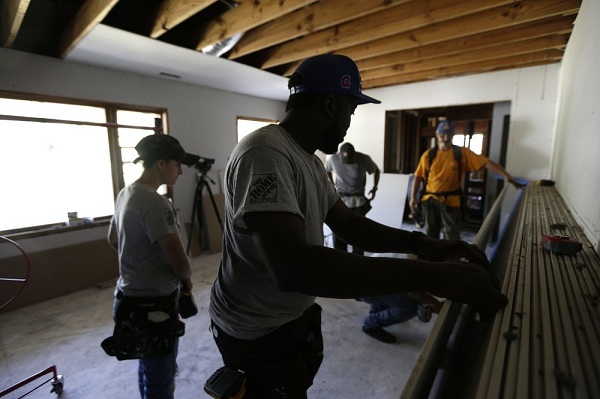 In this Tuesday, July 2, 2019, photo, volunteers from Baptists On Mission and Home Builders Institute work at the home of Clifton Hall, assisting with ongoing repairs due to damage caused by Hurricane Florence, in Spring Lake, N.C.

FEMA is commonly the first source of funding for home repairs, but it’s limited in its budget. After Florence, FEMA approved giving an average of $3,785 to 34,665 homeowners and renters through its Individuals and Households Program. FEMA stresses this program is intended to cover basic needs but not compensate for all losses or replace insurance.

Another program meant to bridge the gap is North Carolina’s Sheltering and Temporary Essential Power program, which used federal and state money to fund basic Florence repairs that fell under $25,000.

STEP funded repairs for roughly 2,300 homes after Florence but wasn’t available after Matthew. FEMA didn’t authorize the state’s request for STEP after Matthew because there were sufficient hotel rooms to support displaced residents.

“We’re not putting a brand new roof on them, but most of the houses need them. A hurricane could come by, and there it goes,” he said.

Avis Rankins, 52, didn’t think the Spring Lake home she shares with her mother was livable after STEP repairs. She said the single air conditioning window unit provided was not practical for hot, humid summers.

“I would not put my mother back in the home,” she said.

Now Rankins continues repair work on hers and neighbors’ homes. On her street, three flooded homes qualified for STEP, but three didn’t. Volunteer organizations decided to make all six homes more livable, going beyond STEP repairs. On a nearly 100-degree-day, Rankins crouched down to drill sheet rock for a neighbor who didn’t qualify for STEP.

“I promised that even if I had to rebuild their homes brick by brick, we were all coming home together,” she said.

Without these volunteers, Jennifer Baker said she probably would have to abandon her home.

Her goal is to move back into her home — presently a skeletal maze of wood — before the new school year. In the meantime, she rents a house where her three children share mattresses on the floor.

Being displaced has also taken its toll on Johnson, who lives on a fixed retirement income and is staying with her daughter Debora Hudson. Because she couldn’t afford a large storage unit, Johnson discarded many possessions; others collect dust and mildew on her back porch.

Volunteers haven’t started on Johnson’s Spring Lake home. She has no timeframe for moving back.

Besides long-term recovery funds, Hudson said her mother’s only option for repairs is through volunteers. But even volunteer repairs aren’t likely to address longer-term storm-proofing.

“There are many concerns about the possibility of storms coming in the near future ... truly all that’s being done right now is the rebuilding, the remodeling process. We have not talked mitigation or anything like that,” she said. “Nobody wants to rebuild just to lose again.”