Orlando Chavez tucks into his lunch of five corn tortillas and a piece of cheese but admits that "some days I don't eat." 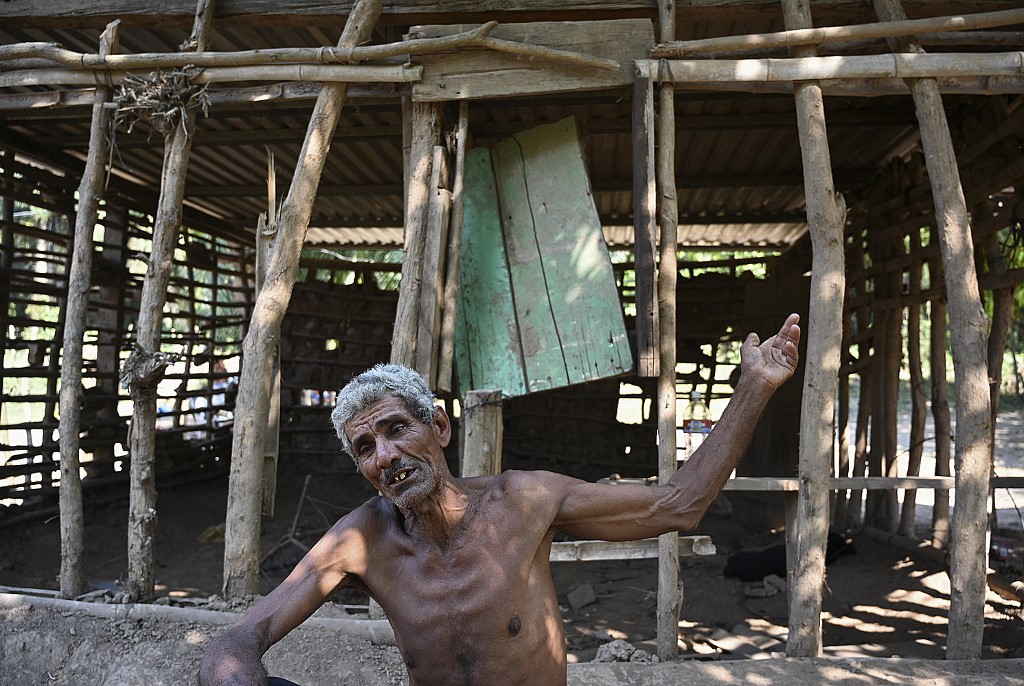 Orlando Chavez, sits in front of his adobe house that was destroyed by Hurricanes Eta and Iota in the former banana field of Las Flores, a branch of the municipality of El Progreso, department of Yoro, 180 kms north of Tegucigalpa, on May 3, 2021. (File photo: AFP)

The 71-year-old lives in El Progreso, a region of Honduras that has been devastated recently by two hurricanes and the pandemic.

The area is emblematic of a trifecta of issues affecting many Central Americans -- environmental degradation, the coronavirus and profound poverty.

Chavez's battered mud hut is one of the few still standing after hurricanes Eta and Iota ripped through the region in November 2020, pounding villages into heaps of scrap wood and zinc roofs.

Across the border in Guatemala, German Cal Pop, an indigenous Mayan, walks through what was once his home town of Queja, before it was buried by an avalanche.

Eight members of his family are among the 51 people dead and buried somewhere under the earth and rubble. The town is now uninhabitable and was declared a cemetery where survivors hold mass to honor the dead.

With no job or home, Cal Pop moved to a neighboring community where he lives off aid from the World Food Program.

"Before we were poor, yes, but we ate calmly. Now, with the tragedy, the community collapsed and the problem worsened... and the pandemic arrived... two tough blows in the year," he said.

According to the United Nations, some 10 million people (30 percent of the population) in the Northern Triangle, an area comprised of Honduras, Guatemala and El Salvador, not only need urgent assistance but also long-term solutions to address the causes of the humanitarian crisis.

Already grappling with chronic gang-related violence, food insecurity and the effects of climate change, the pandemic and recent hurricanes have left residents destitute, with many fleeing for the United States.

Migrant traffic out of the region rose sharply in 2018 with massive human caravans departing Honduras.

In El Progreso, Chavez gets up at 5:00 am and readies his horses and carts.

He and his grandchildren work in an African palm grove collecting bunches of the fruit cut from the trees by other workers and loading them into carts.

Stretching that money is important because the income is not steady: "There's no work because the fruit (only) matures every two weeks so you can't cut it often," he said.

When the mighty Ulua River burst its banks in November due to heavy hurricane rains, the palm grove was flooded and it wasn't until March that workers could return.

Of his two sons who migrated illegally to the United States, one, Emilio, has managed to send some money back home, while he hasn't heard from the other, Jose, in the 10 years since he left.

In Guatemala, Cal Pop remembers how on November 5, 2020, his family was eating lunch when they felt a tremor.

He fled with his wife and two children as a river of mud devoured their house.

His 32-year-old neighbor, Erwin Cal, said that he "never imagined that something that was built over the course of more than 20 years could collapse in 20 seconds."

The community used to grow crops of coffee corn and beans, but now there's nothing.

Many of these Mayan villagers, from the Poqomchi ethnic group, not only lost their homes but also found themselves without work due to the pandemic.

The Queja inhabitants have temporarily settled in the neighboring Chepenal community, but that too is considered by authorities to be at risk from the elements.