Hurricanes hard at work on Labor Day weekends in Florida 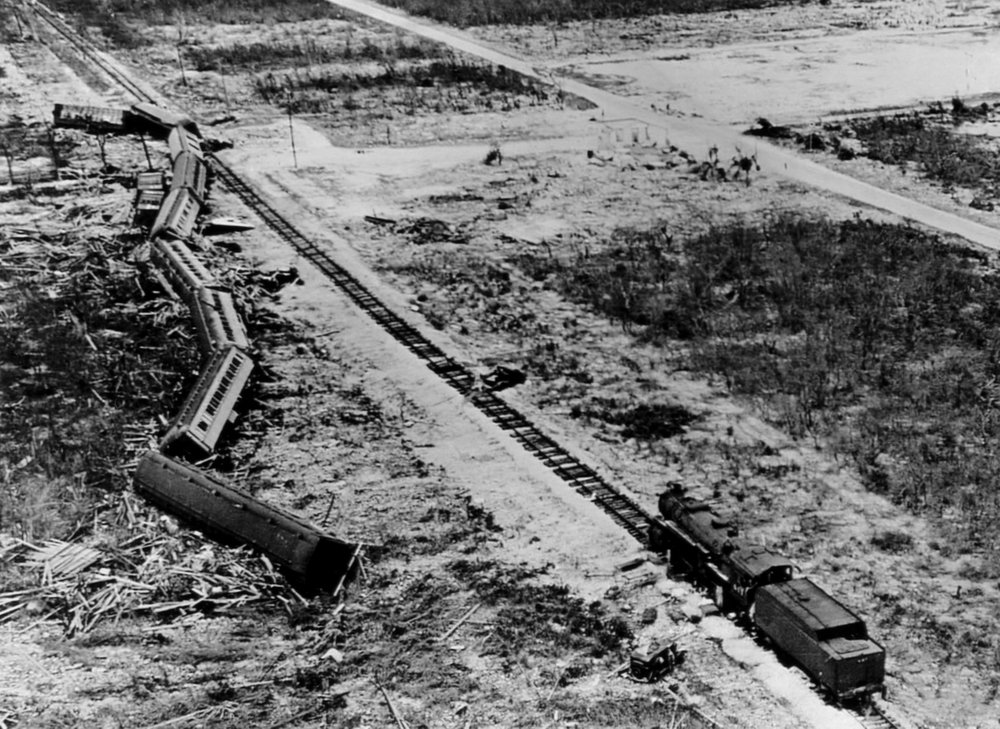 In this undated photo made available by the Keys History & Discovery Center, shows a derailed train and surrounding devastation caused by a Labor Day hurricane in 1935. (Photo: AP)

The traditional end of summer, Labor Day is also frequently a time for hurricanes in the US, especially Florida. More than two dozen have struck over the holiday weekend since 1851, with Hurricane Dorian now looming as the latest.

As destructive as it may become, however, Dorian is not likely to surpass what remains the most powerful cyclone to ever hit the US: a Category 5 storm known as the Great Hurricane of 1935, which slammed into the Florida Keys, killing an estimated 400 to 600 people.

“It’s one of the strongest storms ever to hit the United States,” said state climatologist David Zierden.

Many of the victims were World War I veterans working in a Depression-era program to build the highway connecting the Florida Keys — a fact that infuriated Ernest Hemingway, who lived in Key West at the time and wrote a scathing article titled “Who murdered the vets?”

“Who sent them down to the Florida Keys and left them there in hurricane months?” Hemingway demanded to know in the piece, published in the magazine New Masses.

State officials sent a train from the Florida mainland to evacuate veterans and residents alike, but raging seas churned up by the storm swept it off the tracks, said Brad Bertelli, curator of the Florida Keys History and Discovery Center.

To this day, the Great Hurricane, which happened in an era before storms were given names, holds the record for lowest barometric pressure of any Atlantic Ocean storm to make US landfall. The lower the pressure the more destructive the storm.

Only a handful of Category 5 hurricanes have struck the US. The most recent was Hurricane Michael, which roared onto the Florida Panhandle in October, killing at least 59 people and causing more than $25 billion in damage. Andrew, in August 1992, swept across the southern tip of Florida — also hitting the Bahamas and Louisiana — causing 65 deaths and an estimated $27 billion in damage. Camille crashed ashore along the Louisiana-Mississippi border in August 1969, killing more than 250 people and causing nearly $10 billion in damage in today’s dollars. Days later, landslides triggered by Camille killed 150 people in Virginia.

The 1935 Labor Day storm had a barometric pressure of 892 when it reached land; Michael’s was 919 and Andrew’s, 922, according to Colorado State University researchers.

The middle Keys, mainly the region that is now the town of Islamorada, bore the brunt of the 1935 storm’s howling winds and storm surge of up to 20 feet (6 meters). At the time, besides the vets working on the bridge, there were only a few hundred residents, many of whom were founding families of the region.

“It was like nothing ... anyone had experienced before,” said Bertelli, who described a scene of terrified residents climbing trees to escape surging ocean waters. “Their clothes were ripped from their skin,” he said.

“There were only a handful of structures that remained,” he said.

Hemingway brought relief supplies to the stricken area in his 38-foot (11-meter) fishing boat Pilar, named after a character in his classic novel “For Whom The Bell Tolls.”

“The railroad embankment was gone and the men who had cowered behind it and finally, when the water came, clung to the rails, were all gone with it,” Hemingway wrote. “You could find them face down and face up in the mangroves.”

Other Labor Day weekend hurricanes to hit Florida include David in 1979, Elena in 1985, Frances in 2004, and Hermine in 2016. A relatively weak storm, Hermine nonetheless caused extensive damage along the upper Gulf coast and in the capital of Tallahassee.

“As we get into late August and September, we’re definitely in the active period,” Zierden said, adding that warmer oceans and the additional water now in the atmosphere as a result of climate change have provided more fuel for the storms.

“There’s growing evidence that climate change will continue to affect the hurricane season and hurricanes,” Zierden said. “There is evidence that the strongest storms will become stronger.”